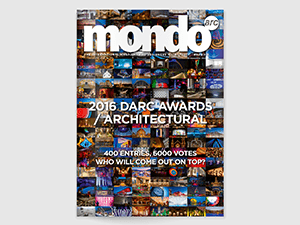 From peaceful public spaces to luxurious places, this year’s darc awards / architectural has seen over 400 entries and 6,000 votes cast. With the second darc night just around the corner, this issue showcases the masses of fantastic shortlisted entries. This includes Illuminate’s NUO Hotel in China (pg. 68), Maurice Brill Lighting Design’s Crossrail Place in UK (pg. 92), dpa lighting consultants’ Four Season Hotel in Morocco (pg. 106) and New Urban View’s Koppelpoort in Netherlands (pg. 112) plus many, many more. From our newly created Event category, we cover Arup’s patriotic illumination of USA’s San Francisco City Hall, which featured at the building’s 100 year anniversary in June of 2015 and simultaneously coincided with the nation’s Conference of the Mayors (pg. 144). Alongside this, issue 92 features wonderful installations from the Art category, such as Mary Branson’s commemorative and historic New Dawn (pg. 128) and Ithaca Visual’s The Storm (pg. 136). This issue also features an interview with Kai Piippo – Head of Design at Scandinavian lighting practice ÅF Lighting (pg. 44), while Henrietta Lynch takes us inside the inner workings of Pritzker Prize winning Renzo Piano Building Workshop (pg. 52). With this being only a handful of highlights and features, many more are listed below.

Each manufacturer partner is teaming up with a lighting design practice to create sixteen inspiration spaces at the specially selected darc night venue in London on September 15th. Big thanks to Speirs+Major, dpa lighting consultants, Michael Grubb Studio, Elektra, Nulty+, BDP, LDI, Licht Vision / Boom Collective, Arup, Electrolight, Lighting Design Collective, GNI Projects, Into, Light IQ, ACT Lighting Design and MBLD who have put in so much work into the darc night installations. For those of you that voted and received your free invite, you’re in for a treat!