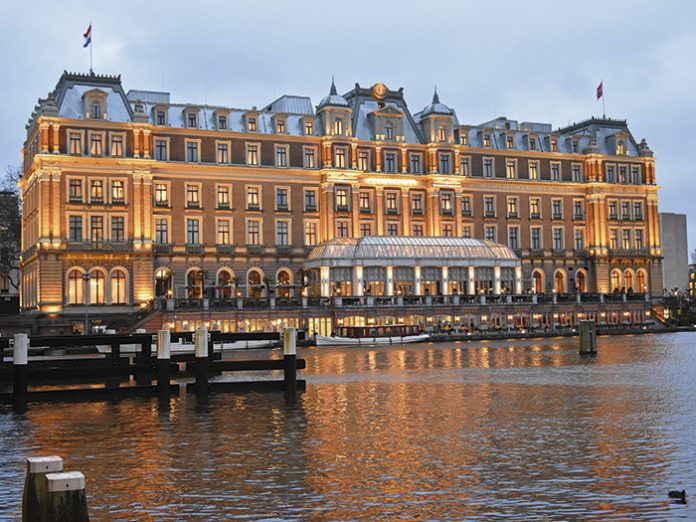 In the heart of the city of Amsterdam is the Amstel Hotel, one of the most prestigious hotels in the Netherlands. Dating back to 1867, this five-star rated accommodation has acted as a temporary home for numerous celebrities and members of the royal family.

Founded by a prominent doctor of the nineteenth century, Dr. Samuel Sarphati built the magnificent building as an architectural landmark that he hoped would one day put Amsterdam on the international map. Heavily influenced by some of Europe’s most famous buildings, the Golden Age architectural style is strongly evident in the façade’s design and in the detailed arches, and has attracted many high-profile guests since opening on 27th April 1867.

Now owned by the globally recognised hospitality organisation, Katara Hospitality, the building has undergone a large-scale restoration on its exterior. The restorations took place over the course of exactly one year to transform the roof and façade to their former glory. With years of previous work put in to orchestrate the restoration programme, design teams worked towards reinstating all original colours and renew a total of 300 elements, ornaments and statues. As part of the planning process, original images of the façade from the local city archives were studied in depth.

Contractor Leidens Burgy Bouwbedrijf completed the full restoration, whilst the lighting design was brought together in a joint effort from Lichtconsult and Hans Wolff & Partners Lighting Designers for the complete exterior of the hotel.

CLS was responsible for the design and fabrication of most of the fixtures that were used, including a number of pre-existing fixtures that were customised into variant designs from its REVO series. These particular fittings were anodized in a special colour, the mounts were custom-built to the appropriate size, optics with several angular apertures were fitted into one fixture and special DMX electronics were designed for the REVO Micro.

Each fitting has the ability to be individually controlled with customised tunable white LED modules with a range of 1800 to 3000K. The REVO inground DMX was created specifically for this project and, in turn, has become available in the main CLS fixtures range.

Koen Smits, Lighting Designer and Associate from Lichtconsult, described their involvement: “If I remember correctly, it was Van Hoogevest Architects who, back in 2015, first felt there should be a lighting designer on the renovation team. The founding architect Gijsbert Van Hoogevest is an acquaintance of Hans Wolff, who ultimately asked us to help them out for the preliminary design phase. Later in the restoration process and when the definitive design was made, the main contractors hired us as a permanent part of the team.

“To make a lighting design scheme that would show the grace of the complete building at night time, strengthen the façade renovations and return its charm and greatness, was the aim for us.”

Smits described the approach to working with such a large team: “A challenge was to overcome the differences in our ensemble of contributors in our project team, (architect, contractor, middle-east owner, municipality officers and the committee on building aesthetics) and to realise the main goal – to illuminate this magnificent and iconic building without altering the architecture or adding visual clutter and without causing obtrusive light for the hotel guests and surrounding neighbours.”

The lighting team also faced challenges when minimising the visual installations on the façade. Smits elaborated: “It is the ever-returning issue of the much-needed air cable to supply power for the luminaires, which unfortunately hasn’t been invented yet! So, we had to try and hide all of the cables as much as possible by laying them behind the roofing, picking smart trajectories like drainpipes and such to ascend and descend lines using separate gears with smaller, lower voltage cables. All of these choices were made in close consultation with the restoration team and hotel facility managers.”

It is not usual practice to have two large lighting design firms working together on one project, but in this particular case Lichtconsult and Hans Wolff & Partners worked very well together and “with great enthusiasm”, as Smits remarked.

“In the last ten years, we have worked closely together on many projects. Usually, Hans Wolff concentrates on the more conceptual issues and I focus more on the detailing and design. Throughout the process, we maintained a healthy overlap and benefited from each other as a sounding board. I feel very blessed with our collaborations,” he continued.

Hans Wolff, of Hans Wolff & Partners, described their participation in the project: “Hans Wolff & Partners are known for their specialisation in historic restoration projects and have previously worked on notable cultural buildings such as the Anne Frank House, Royal Picture Gallery Mauritshuis, Hermitage a/d Amstel and Concertgebouw.

“Amsterdam has a long tradition of using floodlighting for their historical houses along the canals etc. and it’s been done in a modest and tasteful way by the local government. However, more recently this initiative was taken over by commercial parties. The result? Much higher light levels, papering the walls with lanterns, overpowering contrasts with the surroundings and the use of ‘dynamic’ colour lighting.

“So, ultimately there was a lot of pressure on us to come up with a light plan that overcame all of these ‘derailments’ and light the Amstel Hotel in a much more modest, stylish and attractive way.”

Using fixtures and technology from CLS, Opticalight, LED Linear, Pharos, Ligman and Tekna, the team put together a detailed scheme for the elaborate and highly decorated façade of the hotel building. The vertical structure and pilasters are lit upwards using CLS Revo fixtures, whilst the rest of the façade is illuminated with CLS Revo In-ground luminaires and CLS Revo Micros. The lounge area has accentuated the annex on the riverside that was not previously illuminated and now provides a pleasant space for the hotel guests to retire in. Wall luminaires were located on the columns that support the glass roof and miniature LED dots were installed on the interior structure of the roof.

Illuminating the entrance lobby was an important task for the team. Illuminating the entrance balcony, stairs and landing in the area was completed using in-ground luminaires to highlight the pillars, linear LED fixtures that shed light on the intricately detailed balustrade and down lighting on the canopy to raise the street lighting to a comfortable level that eases access on the floor levels to the stairs.

Adding lighting to the lowest part of the well-known view from the riverside emphasises the building’s position close to the water’s edge and creates the illusion that the hotel is floating.

Wolff, Smits and the team also felt it important to incorporate dimmable settings for almost all of the fittings in order to create the perfectly balanced final ‘image’, as well as ensuring both light levels and colour temperatures can be regulated. In doing so, the team were able to fine tune any issues in the illuminations that they stumbled across when putting the design scheme into practice. Smits referred to some examples: “The varying tonal differences between the 100+ year old bricks and the new bricks, and the height differences of the pilasters meant the shorter ones needed less light.”

One particular hurdle they had to pay close attention to was the light pollution and obtrusive lighting that may impact on the quality of stay for the hotel guests. Smits elaborated: “As a member of the Dutch Committee of Obtrusive Lighting, I know how much harm a light installation can do to its neighbours and the dark sky. So, deliberate choices were made to prevent negative effects as much as possible. The LED projectors from Opticalight that illuminate the façade from poles on a distance use masks to cut off not only the direct light into the windows of the guest, but also any light that would otherwise end up in the atmosphere. Projectors mounted on the façade were dimmed per architectural element so just the necessary amount of light (and energy) would be used for the desired night effects.”

The stunning and authentic results have created an iconic landmark on Amsterdam’s landscape today and provide a beautiful focal point that can be seen from the Amstel River.

Smits described the impact the luminaire design has: “I love the way the building is seen from the Amstel River. It really begins at the quay, where the wall luminaires softly light up the passage in front of the restaurant and swimming pool.

“Further up, the lounge annex is illuminated with up/down wall luminaires and the window sills of the building are then accentuated. The big brick façade is shown with special projectors with masks that illuminated the wall texture but cut out the windows, so guests can look in to the beam and not be blinded by it,” he explained.

The final result delivers a warm and inviting environment for prestigious guests and locals of Amsterdam to appreciate.