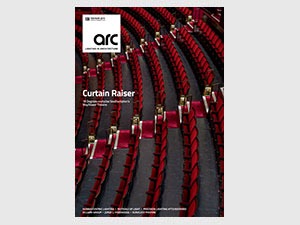 Everybody’s talking…
At last year’s [d]arc room, we facilitated a panel discussion about Human Centric Lighting (HCL) chaired by leading expert Asst. Prof. Dr. Karolina Zielinska-Dabkowska. Featuring Mark Ridler, Director of Lighting at BDP; Rebecca Weir, Creative Director at Light iQ; Stephen Lisk, President of CIBSE; and Iain Carlile, President of SLL, the debate was lively and proved that there were many more questions than answers. So much so that we have reprised the discussion in this issue with a professional paper from Zielinska-Dabkowska and input from lighting designers about the subject, including practical examples of where HCL is used in their schemes.

HCL is often claimed to be the next development stage in the evolution of lighting design, yet the concept seems to have been around forever. Indeed, when we announced the HCL discussion on Twitter, some bright spark commented that this was old news and we shouldn’t have been giving it any further thought.

Last year, according to market research company ElectroniCast, the global consumption value of modules/devices in HCL reached $617.6 million, and is forecast to increase 38% in 2019 to $850.9 million. Unsurprisingly, the critic was someone who worked for a manufacturer who made lighting products that claimed to have solved the HCL conundrum, a very lucrative market. Unsurprisingly, they are wrong.

It has become increasingly obvious how complex it is to imitate natural light, and that far more research is required to identify what is needed to apply artificial light safely. Indeed, Dr Russell Foster who identified the eye’s third photosensitive cells whose function is unrelated to vision, recently stated: “We can’t develop human-centric lighting until we know what impact light has upon human biology across the day and night cycle.”
Lighting designers, and especially lighting suppliers, need to take note. There is a long way to go.

Talking of debate at [d]arc room, we are delighted to announce that, this year, [d]arc room will have its very own hall at London Design Fair during London Design Festival in September. Attracting 30,000 visitors, the event will aim to showcase 75 architectural and decorative lighting companies to the design community. Please contact us if you’d like to be involved.