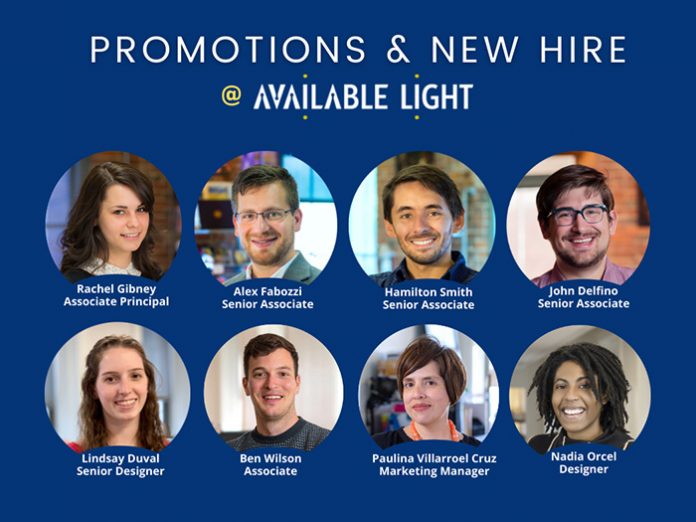 (USA) – Available Light has announced a series of promotions within the firm, alongside a new hire.

Gibney began her career as a theatrical lighting designer, before taking an internship at Available Light, where she has gradually risen through the ranks. In her new role as Associate Principal, she will lead the new Available Light West studio in her home state of Arizona.

John Delfino has been with Available Light for six years, and throughout his design career, has employed theatrical and architectural lighting techniques, combined with a deep understanding of underlying technologies and control systems in the service of creating transportive environments in a variety of metiers.

Alex Fabozzi began his career as an accomplished lighting designer for theatre and dance. Since joining Available Light in 2017, he has focused on museum exhibition and architectural lighting projects including the new Academy Museum of Motion Pictures and National Museum of African American Music.

Hamilton Smith came to Available Light after working across the country on a myriad of projects including opera, theatre, film, events and immersive experiences. His portfolio of work includes the United States Olympic & Paralympic Museum and the National Museum of the United States Army (both recently featured in arc magazine).

Other movements within Available Light have seen Paulina Villarroel Cruz promoted to Marketing Manager, Ben Wilson to Associate and Lindsay Duval to Senior Designer, while Nadia Orcel joins the firm as its newest designer.

Of the staff moves, President and Creative Director Steven Rosen said: “Especially in these challenging times, I am grateful and humbled by the talented people who have chosen to make Available Light their professional home.

“Being part of this burgeoning organisation – collaborating with and learning from each team member – whether designer or behind-the-scenes administrator, is one of the great joys of my life. We are committed to sharing a vision for delivering world class and high-performance lighting design to our clients and their constituents.”