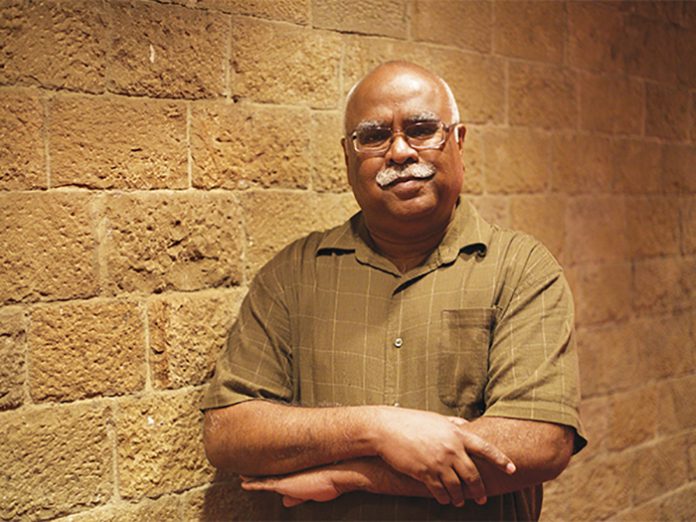 After exchanging a series of emails, I finally had the pleasure of meeting Mr. Babu Shankar at the launch of mondo*arc india earlier this year. Sitting across the table at a press conference, we didn’t get to speak much. Then at dinner, he seemed to escape before I could initiate a conversation. The next I saw of him was during the panel discussion, where he eloquently spoke about the lighting industry – as passionate about the bygone era as he was excited about what the younger crop had to offer. I finally managed to exchange a few words with him when he came up to me and insisted on subscribing to the magazine, even though it was offered to him compliments of the team. That is Mr. Babu Shankar.

Our brief chat that day was followed by a series of in-depth, long distance telephone conversations; where we talked about his adventures as a young architect, him being thrown into the deep end of lighting and surfacing to be not only an expert, but an impassioned professional who has dedicated his working life to lighting the world. I slowly discovered the nuances of what makes Mr. Shankar the man he stands as today. I now take the liberty of calling him Babu, a self made man, with a humble upbringing that imbibed in him a sense of responsibility and respect for those around him. Unassuming in his outlook and unassertive in his appearance, he is a lighting designer who commands a presence and respect much deserved.

Babu moved with his family from India to the US in 1969, where he obtained his undergraduate degree at Howard University in Washington DC. Thereafter, he put himself through a post graduation in architecture from Virginia Tech, Blacksburg VA, by taking up multiple part time jobs. During his first semester of graduate school, the professor that he was working under suddenly passed from a stroke, leaving Babu in a state of financial conundrum. Unable to fund himself anymore, he got a position as a draughtsman in a lighting fixture company called Hubbell. The Engineering Manager, Michael Siska, liked his work and soon enough called Lesley Wheel, of Wheel Gersztoff in New York City. On his exceptional recommendation, Babu was immediately hired to work with Lesley Wheel as an apprentice, which marked the beginning of his protracted career in lighting design.

In the new office, Babu found himself faced with a small project that no one else cared much for – the renovation of the Roosevelt Hotel lobby in New York City. Grappling in the dark, Babu approached the work by poking his colleagues, asking unending questions and spending every lunch hour at the site. Five months later, the lobby was lit, and how – he surprised himself with how beautiful it looked and stood in disbelief that it was his own work, his first own work.

Working in Lesley Wheel’s office, Babu was privy to some of the top architectural firms of the time. At the age of 28, he was astounded sitting in I.M Pei’s conference room, working on a mixed-use project called Warwick Post Oak in Houston, Texas. Nostalgic of that moment, he says, “I felt like I had snuck into the room while no one was watching.”

Such is the destiny of a hardworking man, who again came face-to-face with a project in Kuwait that no one else wanted to undertake. In 1984, Babu travelled to Kuwait to work with architectural firm, PACE on the corporate headquarters of Arab Banking Corporation in Bahrain. Till date, PACE remains one of Babu’s steady clients.

His work at Lesley Wheel’s office paved his way for specializing in high-end hotels, resorts and restaurants; and as his mentor and initiator into the world of lighting, Leslie taught him the fundamentals of lighting design that he still stands by today. Establishing his own design practice, Integrated Lighting Design (ILD) in Los Angeles, California, more than three decades ago, Babu became the first Indian lighting designer to practice in both India and overseas. With more than 35 years of experience in the field, Babu says that the industry has been very good to him. “As a second generation practicing lighting designer, I had the good fortune to work in around 33 different countries, including India. I started working in India in 1993 and at that time, I was only one of about 3-4 practicing lighting designers.”

A strong desire to work in India brought Babu in contact with Hong Kong based interior designer, Mr. Chandu Chadha, who was at the time pursuing multiple high-end hotel projects in the country. Babu first worked with him on the Oberoi Hotel, Chennai, which unfortunately never saw the light of day. However, it did open new doors and Priya Paul of Park Hotel invited Babu to design her first boutique property, The Park Hotel in Chennai. The rest was history, as all other Park Hotels, in Bangalore, Hyderabad, Kolakatta and New Delhi were later illuminated by ILD.

Working with large scale, prestigious projects, Babu says that the quality of architecture and interiors provided a great canvas to work with. He always felt that good architecture lights itself. With limited lighting vendors in the country and few fixtures at hand, they had to bring samples from overseas and would have local vendors replicate them. Without much understanding of optics, glare control, cut offs and quality of reflectors; what was lacking in technology was made up in individual craftsmanship. That was an era of bespoke vernacular technique, which eventually produced some wonderful five-star properties.

Even though India failed to be a growing market at the time or the most coveted place to work in, Babu nurtured his connections and till date continues to undertake projects here. With respect to the evolution of the design and lighting industry over the last 20 years, he is amazed at the substantive growth that India has seen, giving rise to numerous designers and design practices here.

On questioning him about the current design culture prevalent in India, Babu responds with mixed feelings. Acknowledging that there are great opportunities here, he laughs about how him and his contemporaries had to wait for a decade or maybe two to even come close to some of the projects that the younger designers are doing today. Babu goes on to elaborate that even though India’s lighting design industry is thriving and growing in leaps and bounds, there are both opportunities and challenges for these young designers. While the community today is considerably flexible, without many restrictions on formal education and qualifications, he feels that there is an imperative need to ensure professional standards and good ethics. With a growing acceptance for less than ethical tactics, Babu puts the onus on poor compensation and high competition for the work available. Sharing words of wisdom, he talks about the need for employee retention, production of quality products and maintaining excellence. Young, inexperienced designers produce great presentations and renderings, but where they lack is in execution of these said plans. “You can create a great design, but the design is only as good as its implementation.”

Citing his own example at ILD, Babu emphasises that we must establish and promote credibility and expertise. “We offer full service that goes beyond design and documentation, and I feel that has been the backbone of our success. The site team wants to do the right thing and follow your design, but unless they understand your design intent and your willingness to work through the site’s situation with them, the project just does not succeed to everyone’s satisfaction.”

I ask Babu about the nascent Indian lighting industry that today comprises of professionals hailing from varying backgrounds and practicing lighting design. He responds with solemn clarity, albeit encouragement, stating how some designers bring with them experience in architecture or engineering, while some have worked with manufacturers and suppliers. These diverse paths have opened the doors of opportunity, allowing many to work in the industry. He goes on to say, “In a country of one billion people, there is room for everyone in an industry that is growing and evolving. One common thing is that all these young designers have a passion for lighting, and some of them are actually delivering world class designs right now.”

I argue that being such a new economy; we are still finding our feet and taking shape. I question whether there is a need to organize the industry and categorize designers by certification, which seems to have become the norm. Do we need an organisation that can identify ‘designers’ or certify them? Is design not too subjective a field of interest? Waiting for an impatient retort, I am surprised by Babu’s humility once again. “Some of your questions are valid and I don’t have the answers,” he says. He goes on to explain that professional organizations such as IALD, which are internationally recognized, create forums for lighting designers to meet and exchange ideas. In fact, this year the IALD is starting a process of certifying qualified lighting designers.

Besides the ups and downs, the faults and peaks, Babu repeatedly returns to India for work. His passion for light is relentless, and no matter how much I poke the walls of zeal, they seem infallible. So I end the many conversations by asking the obvious questions –  What do you make of yourself as a designer and what does your future hold for you? And in the same calm voice, aching with fervor, I am told, “I feel that I am a good designer, not a great designer; but once in a while I land a project that brings out the best in me and gives me a lot of satisfaction at the end. I still aspire to be a great designer and will keep striving until I just can’t any more. Who knows when exactly that might be…”