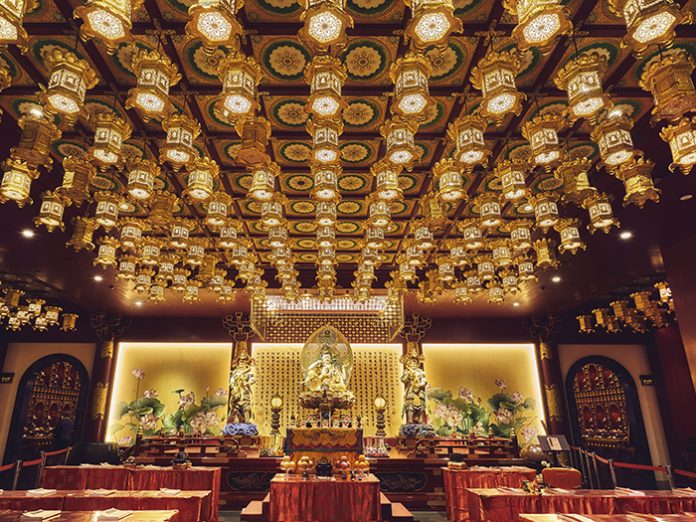 Enhancing the visitor experience for both tourists and worshippers, and to draw closer attention to the Buddha Tooth Relic Temple’s intricate detailing, Aurecon’s lighting scheme brings the Singapore landmark to life in a culturally-sensitive manner.

The Buddha Tooth Relic Temple & Museum is one of the most striking landmarks in Singapore’s Chinatown district, and a place where Buddhists attend a range of daily services. Opened in May 2007, and consecrated in 2008 as a Chinese Buddhist temple, the Tang-styled temple has particular importance to Buddhists as it is home to a religious relic – a Tooth of the Buddha. This artefact is the centrepiece of the building and sits in the Sacred Light Hall on the temple’s fourth storey.

Global engineering and infrastructure advisory firm Aurecon was appointed by the Buddha Tooth Relic Temple & Museum, to provide specialist lighting consultancy services for a significant upgrade of its lighting system. The work was carried out to better enhance the visitor experience for both tourists and worshippers, and to draw closer attention to the temple’s intricate design and detailing. This included a full overhaul of the temple’s interior and exterior lighting sources.

Aurecon’s Principal Lighting Designer, Angela Woo-Scott, thought the potential for creating a transformative lighting set-up was immediately apparent on arriving at the venue.

“It was clear to us on our first visit to the temple that we had to strike an important balance between maintaining the serenity expected of a place of worship while also creating a system that would best highlight the incredibly detailed design of the building along with its array of culturally-significant artefacts. Lighting can play an important role in defining how people will behave within a given space and this project was an opportunity to use that to maximum effect,” said Woo-Scott.

Aurecon proposed a new lighting system for all the public interior and exterior areas. In particular, emphasis was placed on improving the exterior lighting of the temple’s façade and landscape, as well as its lighting control systems, which were suffering functionality issues caused by wear and tear.

The Buddha Tooth Relic Temple is instantly recognisable in its neighbourhood, but much of its beauty lies in the detail, so the lack of adequate exterior lighting meant visitors and passers-by were not able to fully appreciate the intricacy of the building. For the team at Aurecon, this was one area of work where immediate improvement could be made.

The client’s initial request was to perform simple re-lamping or replacement of faulty exterior light bulbs. There were also no plans to change the halogen light sources that lit the temple’s interior. However, following a full site inspection, Aurecon discussed a proposed new lighting system, to be installed in both public interior and exterior areas (excluding the temple’s museum).

Rather than simply update what was in place, Aurecon was able to show the client how a new lighting system would improve the ambiance and overall experience for worshippers, visitors and staff. The aim was to enhance the immersive experience within these spaces to create better overall appreciation of the building. Aurecon supplied detailed plans, drawings and more to demonstrate how the new lighting system would improve the experience for those attending the temple.

Working in a culturally sensitive manner, Aurecon’s project team approached the execution phase with sensitivity, given that the facility would be operational during the upgrading work and out of respect for the religious landmark. In particular, the Chief Monk was initially unsure about upgrading the interior lights, having grown accustomed to the existing set-up within the building that is both his place of worship and his place of residence.

Constant dialogue with the temple’s facilities management team was equally important, so Aurecon ensured a consistent flow of information as the project team reviewed and assessed the management team’s diverse responses while they adapted to new controls and multiple light programming. By ensuring clear and frequent dialogue, adjustments could be more easily and accurately tailored to accommodate preferences and to improve the system further.

Taking into account that the temple was a finished structure, lighting replacement required extra careful handling to ensure no damage was caused to the building’s polished surfaces. Special attention was paid to work that needed to be done close to temple finishes, which could not be altered to match lighting fixtures.

Throughout the project, the Buddha Tooth Relic Temple remained fully operational from morning to night, and also on many nights when religious ceremonies were taking place – sometimes up to midnight. Work in the temple’s public spaces had to be conducted in the early hours, when the building was closed. Tasks such as light testing, commissioning and turning were also performed then. Rope access could be used at these times too, to facilitate façade lighting replacement work.

Commenting on the project’s success, Woo-Scott, added: “Visitors and worshippers at the Buddha Tooth Relic Temple & Museum now have a better experience overall and are able to enjoy the facility’s beauty in an environment that pays respect to the importance of the temple while still showcasing its wonder. Overall, the client was happy with the new lighting; many spaces in the temple are brighter and lighted correctly with the proper tuning and adjustment of light levels and aiming. The façade lighting has helped the temple display its magnificence at night as a significant landmark. Maintenance requirements have also been reduced; it is now easy to control lighting in all spaces.’’ Following a final site inspection with the Chief Monk, he expressed his enthusiasm for the new lighting systsem, as the temple’s fine and intricate details are now highlighted better than they have ever been before. Additionally, through the use of LED technology, the electricity consumption of the temple has also decreased, making it more energy efficient, offering an important contribution to the sustainable and responsible use of resources.