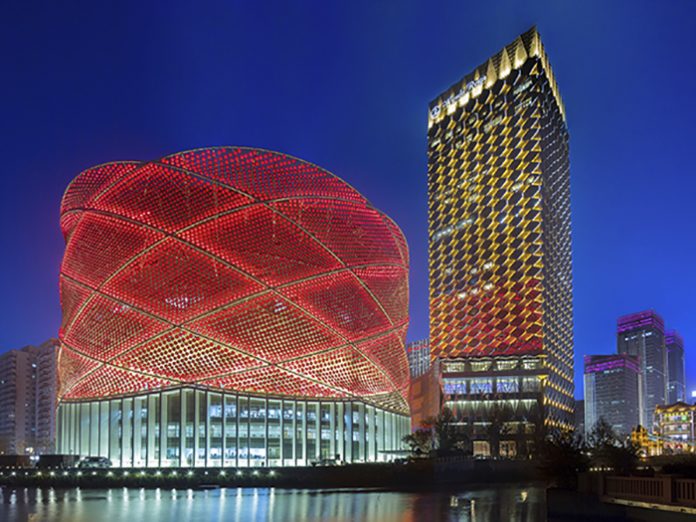 Chinese lighting design was well represented at the IALD Awards which took place in the magnificent Gotham Hall in New York, USA. BUME Perfect Illumination Design & Engineering Company won the coveted Radiance Award for the stunning lighting design at the Han Show Theatre in Wuhan City, Hubei and Yongqi Lighting was one of three Excellence Award winners for its work at the Zhenhai Cultiral & Art Centre, Ningbo.

IALD International Lighting Design Awards Chair Rosemarie Allaire, IALD, shared her excitement about this year’s award-winning projects. “Every year, the IALD receives a d more than 200 submissions, drawn from all over the world. These projects were intriguing and inspiring; it was an honor to witness so many creative and innovative lighting projects from our talented industry. Each of these projects demonstrates unique and distinctive design solutions to enhance the architectural experience.”

The highest point score winner across all categories, in addition to receiving an Award of Excellence for their project, receives the IALD Radiance Award for Excellence in Lighting Design. Winners of the Radiance Award do not know in advance of their Radiance Award-winning status—only that they should be present at the evening’s award ceremony. The event also serves as a fundraising dinner for the IALD Education Trust.

This massive cylindrical building has a plane diameter of 110 metres and a height of 63.3 metres. The external surface of the building is made up of 18,665 individual red aluminum alloy roundels. In creating a lighting plan for this complex modern structure, the lighting design team at BUME Perfect Illumination was inspired by the indirect glow of paper lanterns.

To achieve the desired effect, the team installed twenty five hundred Kelvin floodlights in the internal aluminum curtain; yellow light glows from the lantern ‘wick’, forming a gradation of light and shadow. Underneath, 3000K floodlights are adopted to balance the rhythm of the lantern ‘fringe’.

“The lighting of this civic theater is well integrated into the iconic building design and truly transforms it into a 21st century Chinese lantern, making it a centerpiece of the city,” one judge praised of the project. “The dynamic exterior lighting creates a theatre within a theater, and an illuminated billboard for the venue.”

LED lamps reflect light from the centre onto the roundels themselves, forming four gentle light spots. Each ray pixel can be controlled by a single D-M-X system; the video images created by this approach seem to move vividly and flexibly across the many-faceted surface of the lantern – or can remain static to allow the lantern to emit an understated glow.

Ten Awards of Merit were awarded: Cline Bettridge Berstein for the Stapleton Library, New York, USA; Lighting M for the Kyobashi Child Institution in Tokyo, Japan; Auerbach Glasow French for the California Palace of the Legion of Honor, Salon Doré in San Francisco, USA; Licht Kunst Licht for the Art Museum Ahrenshoop in Germany; Buro Happold for The Brown Institute for Media Innovation at Columbia University School of Journalism, New York, USA; GIA Equation for the Knightsbridge Estate, London, UK; Available Light for the US National Library Rotunda for the Charters of Freedom, Washington DC, USA; Speirs + Major for the Queen Elizabeth Park, London, UK; Pfarré Lighting Design for Das Gerber in Stuttgart, Germany; and Arup for their work at the Northrop Auditorium Renovation in Minneapolis, USA.

A Special Citation was given to Claudia Paz Lighting Studio for her Light Garden installation in Lima, Peru.

A full review of the IALD Awards will be published in mondo*arc issue 85.