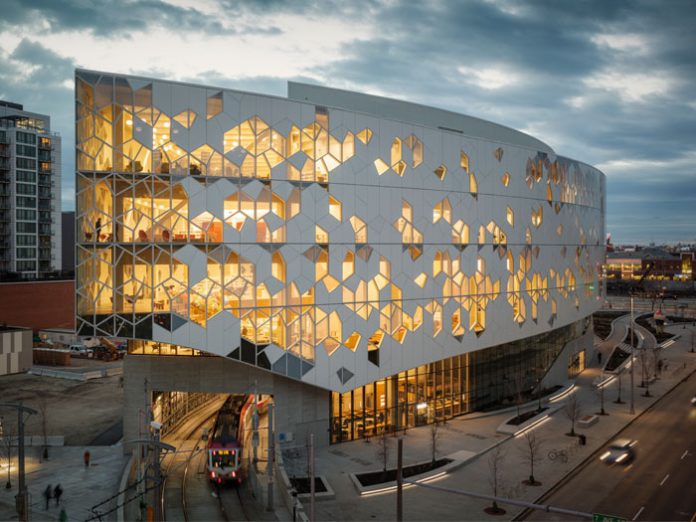 The new public library in the centre of Calgary, Alberta, is an educational and physical bridge for the community and provides extensive spaces to be utilised by the everyone. The lighting scheme by SMP Engineering merges daylight and LED harmoniously in the nature influenced architecture.

The library covers an expanse of 240,000 sqft in the heart of the cultural district of the city, was completed in November 2018.

Construction commenced in 2013 for the striking modern structure, which was an award winning design derived from collaboration between Snøhetta and Dilaog, and captures the city’s desires for a technologically advanced public space.

The $146 million project is the largest public investment for Calgary since the 1988 Olympics and marked the beginning of a new chapter to develop its creativity, innovation, knowledge and technology in the rapidly growing city.

The lighting scheme was designed and implemented by SMP Engineering. Bradly Trufen, Electrical Designer at SMP Engineering, described to arc how they became involved with the project at the beginning: “SMP is the largest company of its kind in Western Canada and has been around for more than 42 years. I think our services and portfolio of past projects played a key role in us being awarded this job.

“We were approached with an initial concept, which is pretty typical. It’s our job to push the limits and try to get as close to the conceptual idea as possible. But the project lighting design is dynamic, it’s constantly changing until the project is complete – we only get one shot to get it right. You can’t go back to the client and ask for a redo,” he added.

The building is located on the Light Rail Transit Line and acts as a bridge between the previously divided Downtown and East Village areas. Acting as a space for social interaction, studying, learning and community activities, the library is a hub for celebrating inclusivity.

“Doubling as a portal and a bridge, the entry plaza heals the previously split seam between the two neighbourhoods and re-establishes visual and pedestrian connections across the site,” claimed Snøhetta.

The façade of the structure is cladded with hexagonal modular pieces of fritted glass and occasional iridescent aluminium that form an aesthetically pleasing pattern across the curved surface and allow natural light to gently filter through. The entire surface of the building is covered in this geometric pattern, which suggests there is no one particular front entrance, again reinforcing the goal of the architecture to be unifying and all-inclusive.

When approaching the entrance to the library, visitors are welcomed by one of the largest freeform timber shells in the world referencing the Chinook cloud arches that are common to the area, formed from local western red cedar.

Explaining the layout of the building further, Snøhetta described how the wooden archway “spirals upward over 85 feet to a view of the sky through the oculus. Wood slats line the perimeter of the open atrium, shaped in plan like a pointed ellipse, serving as an orientation device for people to quickly grasp the circulation and organisational logic of the library. The rhythm of the beams and columns are reminiscent of a stoa, the public, open-air colonnades of ancient Greek architecture that doubled as spaces of gathering and intellectual exchange”.

The six floors of the library have designated spaces with varying uses, including a 350-seat theatre and performance hall. A programme of lively events, public activities and the children’s library, with play areas, occupy the lower floors, which then gradually transition into quieter study areas moving upwards until reaching the Great Reading Room on the uppermost level. Visitors enter this inspiring workplace through a transitional space of softened light and acoustics. Natural light plays a key role in illuminating this room, peeping through wooden slats that provide glancing sightlines between the atrium and the western façade.

“Throughout the design, we sat down and discussed integration of lighting into the architecture,” reflected Trufen. “Our role is to always be creative and to provide options for discussion. I don’t think our creativity was ever stifled in any way. It is a bit depressing when you come up with an idea you consider brilliant and they are shot down in a moment! But I am an optimist and I don’t like to dwell; I focus on the ideas that stick. We need to look at the bigger picture and any place that we can help the team in this regard is a win.”

The addition of dimming and daylight harvesting throughout the space helps to maintain the illuminance levels, regardless of the time or weather conditions outside. End-user digital controls allow for control over the entire design, which also ensures the awareness of luminaire usage and energy consumption. The library was built to be one of the most energy efficient structures of its kind, which played a vital factor in the designing and fixture choices made by SMP Engineering. “We needed one of the most adaptable lighting control systems on the market,” explained Trufen.

“That meant no proprietary control hardware; reprogramming with remote access and user interface and a long warranty and support from the manufacturer”.

In terms of designing a scheme for the Calgary Library, the SMP Engineering team stepped out of the box and, in some areas, did the opposite of what many designers would attempt.

“There is a current stigma in the architectural world for having visible fixtures. They want the light to appear out of cracks in the architecture. To make this a reality requires a bit of juggling of the wants of the client and the architect and the needs of the relative codes. We managed by approaching lighting in all the different methods available and narrow them down until we have the best solution. It is a lot of work but it pays off in the end,” explained Trufen.

“The entry vestibule was a new design to me. Typically, we try to hide LED sources, but the limited space in the vestibule didn’t allow enough room for a proper dispersion of light. Having even illumination is a trend. Going with a trend doesn’t give you any attention as you’re just in the pack. So, instead of fighting the design, we embraced it. The end result was like one of those old-time Vegas casino signs. It makes the entrance stand out, inviting and above all else interesting. I’m sure any lighting designer will scoff at it, but I’m not designing this space for them. This is for the public.”

The team also came across other challenges along the way, such as the installation of lighting under the sprinkler lines. “The architect wanted the open ceilings simplified so as to avoid clutter,” Trufen elaborated. “This meant varying lengths in the fixture, which was a nightmare to organise.

“Another challenge was the suspended fixtures in the enclosed public spaces. The doors were full height, so the fixture needed to be stepped back to avoid the door swing. Sounds easy enough, but coordinating the length of each piece was anything but”.

Upon reflection, Trufen comments the challenges and failures are opportunities for learning experiences and claims they are the highlights of the project. “I’m excited about the result. Some areas turned out better than I originally anticipated and others I look back on and consider what I would do different. The stuff that keeps you up at night is the most exciting and rewarding,” he concluded.