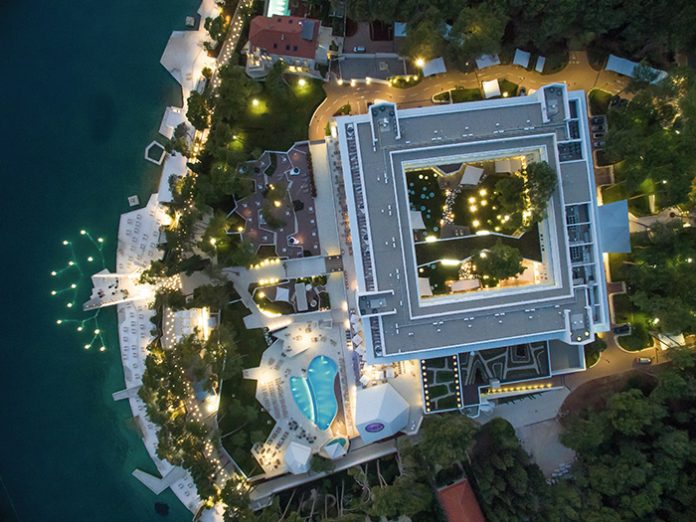 Čikat Bay in Mali Losinj, Croatia, was at one time, very well known as a luxury health and seaside resort for the continental upper classes during the 19th Century. Its charming surroundings and discreet nature of its location never actually changed this initial purpose and after recent revitalisation, this fascinating and beautiful location has become even more of a luxurious five star destination with attractions of an exceptional level.

The architectural lighting project from lighting design practice Skira, consists of a grand hotel, exclusive boutique hotel, two commercial villas, five private villas, connected green areas, public roads, driveways, a water park and promenade. In total, an area of 162,082m² has been illuminated (public space 16,230m², exteriors 87,596m², interiors 58.256m²), with the architectural lighting based on a holistic and methodical approach from the very early design stage. Not one space was seen in isolation and the strategy was based on various lighting diagrams and topographies developed especially for the project – taking care of the natural environment and the benefit of the whole community.

Taking a total of two years to complete, support from the client Jadranka Hotels was constant from the very beginning to the very end – even down to the smallest of details meaning Skira’s initial design ideas could be realised as imagined.

Privately funded, the 2.3km long promenade at Čikat Bay has been carefully reconstructed and fitted with random effect, discreet lighting where visitors can take long, romantic strolls across the inviting pattern, installed directly to the stone pathway where the shadows and lights from the surrounding greenery give way to the architecture.

“The main challenge for us was, as usual, the budget,” said Dean Skira of Skira architectural lighting design practice. “Fortunately as we had contact with the client the entire time, we were able to explain the benefits of quality design by using high-end products – considering not only aesthetics but energy savings, long-term maintenance, the local climate, seasonal changes and so on.

“The client realised that our presence on site was absolutely necessary as the contractor was not familiar with most of the technology and control systems we had used. We adopted a strict and professional approach towards all parties involved in order to keep tight control over the entire process. By the end of the project we were managing 157 electricians in order to complete the work properly and on time.”

Medusa, the marine lighting project within Čikat Bay, required the lighting designers to take an artistic approach to the general lighting – highlighting an underwater network of luminous sculptures. This installation is rectilinearly connected to the main entrance of the hotel and dominates over the coastal terrace as a visual highlight for guests and an act of the unexpected sight, following the central principal plateau. The idea was to create a portal of light with ten-metre high, specially designed poles, inspired by pen shells. These poles are connected with the main jellyfish hub with thin LED lines. Positioning and connecting was a very challenging and technically demanding part of the project as the line is continuously integrated into the poles, floor and steps, creating visual connection between luminous underwater streams, physically ending in the jellyfish hub.

Medusa is an 80cm wide globe, illuminated with a fibre optics system of 200 luminous tentacles connected to it. The 60kg jellyfish hub is anchored to the sea floor and secured against tidal force and poor weather conditions, which while rare, are possible. The inviting and intriguing, magical but not deceptive design of Medusa is embedded into the seacoast and is a pleasant sight during the day as well. Underwater streams are made of light fibre optic cables with 20 illuminators and fourteen decorative submarine fixtures. They also radiate constantly changing light, which follows the sea current. Harmonised with the light from the shore this creates an unforgettable picture, an underwater visual experience for divers and spectacular attraction for the viewers. The entire system works on 24V with the power adaptors positioned inside the panel room located about 80m away from the longest illuminator.

The entire maritime project is a bespoke luminous installation which took six months to manufacture and two months to install with a professional team of divers, technicians, builders and engineers, closely followed by Dean Skira’s overview and his close team of supervisors.

“Installing the jellyfish installation was a serious engineering venture since all of it was done for the first time and we needed survey engineers to position the exact location via laser instruments under the water,” said Skira. “Divers had to drill the anchors into the sea floor and then fiber optic cables were laid down and the jelly fish were anchored to the sea floor, so most of the work was done under water.

“We ourselves, put diving suits on to control the work right there on site. I must say it was quite fun, even if we did have the jitters as to whether it would all work in the end. Because of this, it was definitely our most challenging project so far.

“Added to this was the strip light that follows the massive steps going into the water, each step was made of solid stone with approximately 500kg to one tonne that had to be put into place right next to the strip light housings. The light itself was cut to millimetre precision to follow the form of the steps exactly.

“The rest of the public lighting was also challenging as I wanted to focus the reflectors to a precise location by creating a moonlight effect and shadowing of the branches onto the beach,” continued Skira. “The poles are seven-metres high, so there was no possibility of bringing lifts to adjust the reflectors so I ended up climbing on each one of the poles and adjusting them single handedly… All 100 pieces!”

The key lighting consideration on this project was for Skira to create a balance between interior and exterior lighting, between private and public areas. To create an atmosphere where the visual horizontal is full of light vertically and horizontally, but without seeing the light source or fixtures. In order to create an image of the bay that draws people at night to walk around and enjoy the landscape and the sea, a romantic atmosphere was desired throughout. Skira achieved this by considering the rhythm, postures and pauses of light, by illuminating everything that creates interest to the visitor during the daytime; the trees, waves, sea floor and so on. The simple pier became a gathering place and soon afterwards a lounge bar, because everyone wanted to be there at night. Decorative luminus five-metre high poppies became a meeting point and another unexpected scene in the public pathway.

“We wanted to extend the visible field so that all architectural or landscape elements are present at night and provide a nocturnal picture that is unique to all visitors,” said Skira.

In terms of natural lighting, Skira lighting design implemented a control system programmed to take into consideration the strong influence of daylight in some areas and practically no daylight in others. “Finding the right balance was a time-consuming process since we were directly involved in the programming of all scenes in all interiors and exteriors, for all buildings in the bay,” continued Skira. “This was a very unique and specific project for us and I believe it would be for any lighting designer as it was extremely complex. This lies in its many different architectural typologies that vary from 19th Century up to contemporary style.

“Defining the connection between private and public areas, where most of the time there was no clear division, also made this project unique; seasonal changes in landscape and density of the visitors were also considerations when we made energy saving plans. In the winter almost 90% of the system is automatically shut down, then in the summer months there is a change of scene after midnight and then again after 2am and so on.

“Maintenance was a big issue in this project because there was a large number of lighting fixtures to deal with, this made fluid, seamless scenes between all the variations extremely challenging.”

The Bellevue hotel at Čikat Bay was an existing structure that was partially changed to include two new floors. As part of this, and when considering the lighting scheme, the main structural elements needed to stay intact and so it was important Skira worked around them to create new spaces and install all HVAC, water and other infrastructure, which was very present yet invisible. The lighting needed to work around all of the constraints while still achieving the final intended result.

“I believe that our strongest force in realising this project was the creative approach that fell on a fertile ground of an enthusiastic investor who cared deeply about the project and is not about speculative short-term return investment,” said Skira. “Our presence with great energy and enthusiasm was transferred to all involved even the stonemasons and electricians. Everyone wanted to be part of this unusual story.”

The important elements of this project mostly lie in Skira’s personal approach towards all stages from sketches until the last switch was turned on. “We practically lived on the island for two summers and worked for two years without a vacation to accomplish and realise everything we had planned,” concluded Skira. “In my opinion this is a very unique project.”