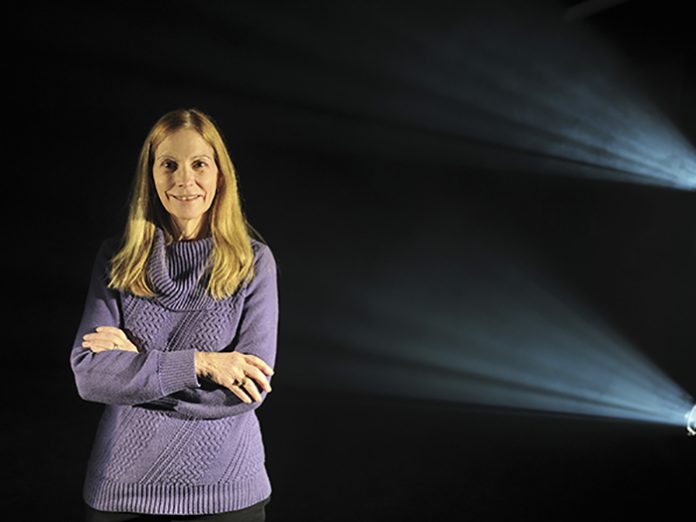 Cindy Limauro didn’t approach the 691 architecture students at six US universities who attended her one-day workshops garbed in armour and carrying a battle banner. Unlike the legendary Joan of Arc, Maid of Orleans, who successfully battled the British in the early 15th Century, Limauro set out in 2013 to accomplish what no one else – woman nor man – had done before. Get architecture students excited about lighting by participating in an all-day, hands-on learning experience.

Limauro is a professor of lighting design at Carnegie Mellon University’s School of Architecture and School of Drama. In 2012, she applied to the Nuckolls Fund for Lighting Education for a $20,000 grant to develop and present a condensed lighting design workshop program to upper-class undergraduate and graduate architecture students. The Nuckolls Fund, established in 1989 in honour of lighting designer and educator James L. Nuckolls, has so far given $895,000 for the advancement of lighting education in North America through an annual distribution of grants and awards to educators, design professionals, and students.

In applying for the Nuckolls Fund grant, Limauro says her primary objective was to inspire and excite architecture students about lighting as she has done during her 25 years of teaching at Carnegie Mellon. The idea to apply for the grant, she said, came from Paul Gregory of Focus Lighting, a longtime friend and Nuckolls Fund board member, who approached her about submitting a proposal for teaching a lighting workshop at universities around the country. “Knowing my passion for teaching and promoting architectural lighting design, I immediately got excited about submitting a proposal,” Limauro said.

The Nuckolls Fund board awarded Limauro a $20,000 grant to cover preparation and presentations at four universities<strong> </strong>during 2013-2014. She contacted deans at selected universities around the country with degree programs in both architecture and theatre. Limauro requires stage lighting fixtures on site such as those used for theatrical lighting training for her hands-on workshop. Four schools were selected to host her visits: University of Texas / Austin; Northeastern University, Boston; California Polytechnic State University, San Luis Obispo; and the University of California, Berkeley. “The student response was nearly quadruple what I expected,” she reported. “At Carnegie Mellon, I limit the class size to 24. The average workshop attendance was over 80.”

“I could foresee establishing a framework for introducing some of the visual effects that can be created by application of lighting techniques. Most architecture students have had little or no exposure to lighting design as part of their course work,” Limauro said. “In my experience, designers involved with spatial relationships need to think about lighting from the beginning. It’s difficult for a design student to grasp lighting concepts without a light lab. The transition to the real world comes when they can touch and feel light. With a well-equipped light lab, students can comprehend form, intensity, and movement, and apply them to virtually anything they design,” she indicated.

Limauro’s workshops include case studies and hands-on examples. On the first day of her visit, she hangs and focuses the light plot in the studio theatre. On the second day, her initial lecture to students covers ‘Learning to See Light’ demonstrating intensity, angle, colour, and movement. Then the class is divided into sections in the afternoon with each group using its own independent set-up of fixtures to experiment with a sculptural arrangement to achieve a specific visual objective, including solutions to lighting that create time, place, and mood.

“Another objective was to provide a template for the faculty to create a lighting design course with the workshop format as a basis,” she noted. Limauro has been invited back to present the workshop at UT-Austin by Professor Keith Simon and at Cal Poly by Professor Sandy Stannard as a prelude for their taking over the teaching of the workshops as part of future curricula.

Based on the enthusiastic first year’s reception to Limauro’s workshops, the Nuckolls Fund agreed a second $20,000 grant for 2014-2015. The University of Michigan and Arizona State University were added to the campuses visited for the second round of workshops. Limauro evolved her career as lighting designer and teacher of lighting design at Carnegie Mellon, by becoming a one-woman producer / director / group leader and took her intense single-day workshop on the road. “I never did theatre in high school and when I went to the University of Michigan, I enrolled in the creative writing program,” she explained. “Then the legendary playwright, Arthur Miller, came to meet with our playwrighting class, and his passion for the theatre really inspired me. I decided right then that I would become a double major in creative writing and theatre.

“I gravitated to lighting design because I felt it had the same emotional qualities as writing in telling a story. I’ve always been fascinated by the beauty and magic of light,” she said. After graduation, Limauro worked for two years in the theatre to make sure this was the right path for her… It was, so she went on to receive an MFA in Lighting Design from Florida State University and has worked in lighting ever since. Opportunities arose that brought her to Carnegie Mellon University’s School of Drama in Pittsburgh.

The lighting program that Limauro created at Carnegie Mellon embraces theatre, opera, dance, television, concert lighting, entertainment design, and architectural lighting design. She also designs lighting for theatre, opera, and dance performances. “I transitioned into architectural lighting after an architect saw my lighting for an opera and wanted a more dramatic approach to lighting of his projects,” she said. Together with her husband, lighting designer Christopher Popowich, she established C&C Lighting in Pittsburgh.

This led to the teaching of an architectural lighting design course in the School of Architecture, bringing in drama students as collaborators. To create a hands-on approach to architectural lighting, Limauro directs her students in preparing full scale lighting mock-ups on buildings on campus and eventually at sites in downtown Pittsburgh and other neighbourhoods.

“When I started teaching, the first thing I instituted was a lab space equipped with lights and a control system so that students could experiment with light 24/7 on class projects or productions they were designing. It requires them to work with light every day to really master the art of lighting,” she pointed out.

In 2005, Limauro was invited to teach a lighting workshop at the Henry van de Velde Higher Institute of Architectural Sciences in Antwerp, Belgium. Based on positive results of the first group of students, she convinced a lighting manufacturer to donate lights and a computer console to create a permanent light lab in the school for the use of faculty and students. Her success was noticed by the Mayor of Antwerp. “It led to a fantastic design opportunity for the students to design the relighting of the front of the Royal Museum of Art,” she related. “It’s a beautiful building but was lit poorly with a couple of floodlights.” With husband Chris Popowich, they guided the students who had never designed with light on this scale through the process. The students made a presentation to the city that included historical research about the museum and its importance to the surrounding neighbourhood as well as researching design ideas for museum lighting.

“Zumtobel partnered with us in supplying lighting equipment and expertise for the installation of full-scale lighting mock-ups on the façade. The city accepted the students’ design over other professionals and the project was realised that summer,” Limauro reported.

She continued her association with the Institute for four years. Throughout her career, she has communicated to her students that lighting is fun and with hands-on participation they will not only learn better but will remember it long after the workshop is over.

“I encourage theatre lighting students to think about lighting architecture as a viable career option, that they can easily segue into a career in architectural lighting because of their expertise in light. Every year there are always two to three students interested in architectural lighting design. They’ve gone on to work at Focus Lighting and Fisher Marantz Stone in New York, Lightswitch in San Francisco, Visual Terrain in Los Angeles, Speirs + Major in the UK, to name a few. Of the students I taught in Antwerp, there were always one or two each year who applied for graduate lighting design programs.

“For the student architects, the workshops introduce an understanding of what light can do and how it impacts visual perception and mood,” Limauro continued. “I emphasise how important it is for them to think about light at the beginning of the design process, and hopefully hire a professional lighting designer to achieve their vision for a space. Over the years, there have been one or two architecture students who become excited about light and want to pursue a graduate degree.”

For the second visit to UT Austin in November, Limauro was able to add a full-scale lighting mock-up. Students experimented with different types of LED sources on the Student Union building. They were able to compare white LEDs with colour-changing LEDs and explored different approaches to lighting the building. “This is something I would like to expand upon with other schools moving forward,” she pointed out.

“The projects I assign to students are aimed at creating big conceptual ideas that are then explored through lighting mock-ups. The emphasis isn’t on a finished product </p> <p class=”p1″>since we are limited by resources. Instead, I want them to evaluate what they see, what works, and what doesn’t work and why.”

Faculty members at universities where Limauro’s workshops have been staged have told her that the workshops have had a great impact in forever changing how the students think about light. “The opportunity for our architecture students to think broadly about their professional role by engaging with an internationally known lighting designer with such interdisciplinary experience was truly eye-opening for many of them,” said Susan Ambrose, Senior Vice Provost for Undergraduate & Experiential Learning, Professor of Education at Northeastern University.

“I am very hopeful that my model of teaching can be sustained,” Limauro added. “Thanks to The Nuckolls Fund grant, I can be an advocate for developing lighting education resources and sharing responses from school to school.”