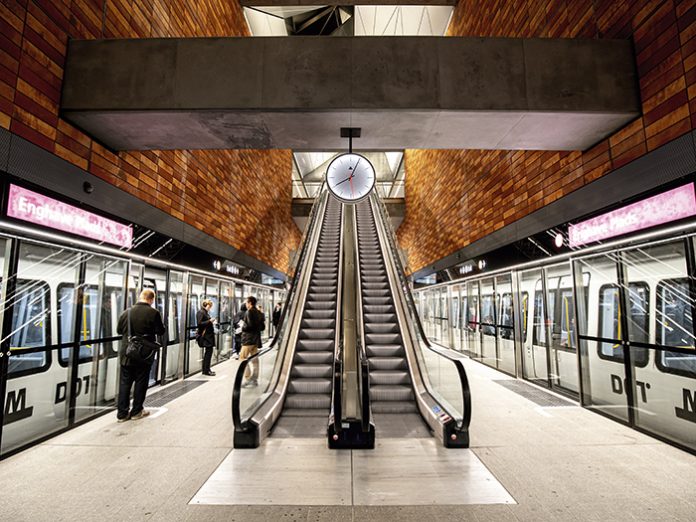 “Public transport – you may love it or hate it. You may consider it a responsible choice or perhaps something “not for my type of people”. However you feel about it, public transport keeps our cities going and it helps billions of us to get to work, to see our friends and families and get our errands done every day.

But how do you get everyone else out of their cars and into the metro? While many cities debate the pricing of public transport or the frequency of trains as a main factor, the City of Copenhagen believes that the quality of the experience in transit is a key motivator for the public to travel by metro. And that is where design kicks in: the creation of a pleasant, effective, delightful experience. It is the true purpose of design. Whether we create a pair of earphones, an MRI scanner or a metro station: design establishes an emotional bond with the user by offering a great experience.

We – designers I mean – love this kind of thing. Because contributing at the emotional level means moving away from following the crowd, from tech features, from specifications and from efficiency. It means having a discussion about value instead of cost. Design is all about getting to the essence of what it is to be a human: our emotions. Design, as a custodian of brands, truly differentiates. It establishes an emotional connection. Could you love a metro station? Well if you’d love any, it would be one of the Cityringen stations in Copenhagen, Denmark. Or all seventeen of them. That is how you get people into public transport: make them love it.

Design, whether lighting design, architecture, product design or the Cityringen (which mixes of all of those at the same time) also drives business. It was 1973 when Thomas Watson Jr. said in a lecture at the University of Pennsylvania: “Good design is good business”. Who was he? The CEO of IBM. 50 years later, Watson is still so very right. His vision is the second rationale behind the role of design in the Cityringen project. Forget the timetable of the trains, or the cost of a ticket: design is what makes Cityringen a success.

Is that all it’s about? Well, no. Besides enabling an emotional bond and driving good business, design is instrumental in a third way. Nille-Juul Sørensen, the brilliant Dane who is not just an architect but also a product designer, a thought leader, a luminary and an illustrator, got it right when he started as the Chief Architect of Cityringen. He composed a team of some of the brightest design minds he could find. The contacts in Nille’s phone read like the who-is-who of design, so he could hand-pick the very best.

This idea of true teamwork and taking a holistic approach to design was instrumental. By doing so, Nille wanted to influence, and enable the client to take bold decisions. Blending daylight and electric illumination in a 30-metre deep metro station? It’s easy to say “it’s not possible”. But how cool would you feel as a client when you decide to just do it and give your team a mandate? This is a vision that we practice in every project and with every client. It truly moves things forward and into the future. Cityringen engaged designers so that they could take bolder decisions than they would have taken without them. We give you not just ideas, we give you confidence. In the Cityringen project, we validated those “crazy” ideas in my favorite way. And we discarded a few too.

Long before Cityringen, in 1994, we developed large-scale physical models to evaluate natural light and miniature versions of architectural light fittings. We went all the way to the Science Museum in London, modelling parts of the building at a scale of 1:5, including scrims, dimmable lights, colour gels and everything else. We had so much fun, and that has never changed. Later, in our work with Zaha Hadid Architects, projects were getting so large that we had to resort to scales such as 1:250 for our wooden models of bridges and large office complexes.

Then when working on the Apple Stores, we returned to full scale mockups and developed the famous seamless, continuous ceiling illumination. All those projects are examples of pushing the boundaries of what light can do: the way it plays with materials, how it changes perception, how it drives the experience and how it is good for the project in new and unexpected ways, and how clients take bolder decisions than they would have taken without the designers.

The large-scale models of Cityringen were stunning, and they illustrated very effectively the things that are otherwise just so hard to explain: the rendering of the textures of walls; the liveliness of the colours of tiles; the pattern of shadows on concourses; the perceived changes of sunlight outside when you’re 30-meters deep under the surface, waiting for your train; the light in its magnificent wholeness. The models showed that wholeness. They convince without words, without calculations, but with so much persuasion. The models were big enough to include light, yet small so you could walk around them.

They were rough enough so that we did not lose ourselves in details, yet fine enough to tell what had to be told. They were inspiring, and they generated many new and better ideas. And they were affordable. So, I say: what else do you want? And the interesting thing is, once such models are there, engineers, architects, lighting designers, acousticians, wayfinding experts, industrial designers, investors, owners and even train drivers all start using them in their very own way.

Models provide a simplification of a complex problem, and that is not a bad starting point to find an elegant solution. Moreover, my teacher at the Academy of Arts, Peter de Kimpe, was right when he said: “If you can make it out of cardboard, you can make it for real.” He did not only mean that models are a great way to validate design, I think that he also meant that imagination is the designer’s most important instrument when creating the man-made world that surrounds us.

The lighting plan for Cityringen is simple and clear – the light is “easy to experience”. With that, I mean that you don’t need to be an expert on architecture to appreciate its quality. There is a simplicity to it, and that is what I love: the patterns are intuitive, and the lights seems to be placed just how everyone else would place them -I like that so much. It’s the natural logic of a great design. At Cityringen, the light is just how it is meant to be.

In the Cityringen stations, there are light lines, where we suggest to guide you – just follow them and you’ll find the train. There are splashes of light where surfaces are interesting – just look at them and you’ll discover. There are highlights – just see them and you’ll step safely (at an escalator landing, for instance). And in some stations, there is the generous, ample daylight from skylights and mirrors, or does it come from heaven? Either way, we have directed it as deep as we could.

The project opened towards the end of last year, but we began its design back in 2007. There was LED, for sure, but it was not always viable, in particular not wherever colour rendition was really important. The choice of LED fittings was limited. Most lighting people were still using metal halide when it had to be bright, and tungsten for everything else. So, it is no wonder that many asked me how the Cityringen team anticipated the expected changes and the full digitisation of lighting.

Well, there wasn’t any rocket science: instead of specifying lighting technologies, we detailed lighting principles. We described the effects and how the public will experience the light. Sure, at some point we had to make an estimate of power consumptions, and describe physical dimensions. But even then, what prevailed was what we wanted it to look like and to feel like, not what happens behind the walls and ceilings. Later in the project, the priorities shifted of course, and the technical design became crucial to delivering a well-executed project.

And now, having visited the final result just after the opening, I can say that the project has worked out wonderfully, just like any other project that uses digital light not just for energy savings, but also for focus and direction, as well as for glare control, colour rendition, beam shaping and controllability. The lighting team and the designers and engineers have done a fabulous job.

The seventeen stations of the Cityringen demonstrate that “form follows emotion” and together they are a tremendous project. And while their lighting may look easy and intuitive when you travel underneath Copenhagen, it was born out of a desire to delight travellers and give them a rewarding and memorable experience. And that is exactly what design is supposed to do.”