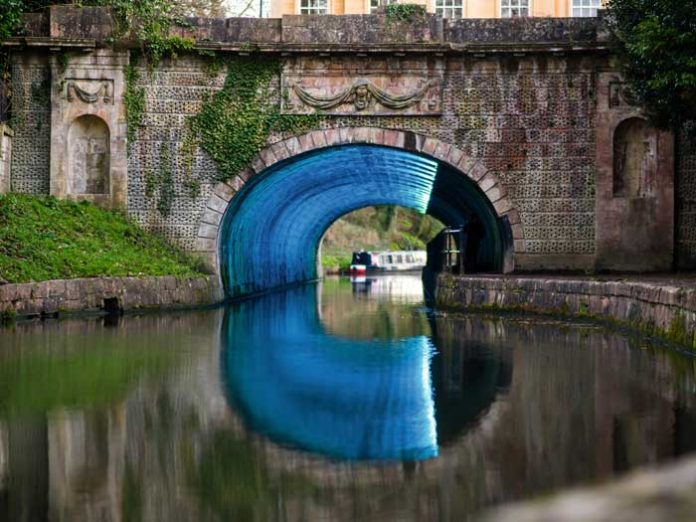 Cleveland House is a Grade II listed landmark in the historic English city of Bath. Originally named Canal House, the property was designed by Georgian architect John Pinch the Elder, and build by the Bathwick Estate in 1817 for the Kennet and Avon Canal Company.

Described by British Listed Buildings as “one of the most architecturally refined buildings connected with canals”, the building sits above the Kennet and Avon Canal, with a tunnel running directly underneath the property.

Enlightened was commissioned by the Trevor Osbourne Property Group, developers of Cleveland House, to provide a lighting scheme for the tunnel that would not only make the passage safer but enhance its atmosphere. They also wanted to be able to control the installed lighting to showcase the tunnel’s unique character during celebratory events and on special occasions.

The Bristol-based firm has worked with the Trevor Osbourne Property Group on “a number of unusual projects previously”, according to Managing Director Simon Marcus, and felt “privileged” to be asked to provide a lighting design for this historic but underappreciated space. Wanting to aid rediscovery of its simple industrial beauty, the firm chose to best showcase the tunnel’s vault with a lighting choice that allowed a daily lighting state of elegant white but also made use of the latest in LED technology.

“We demonstrated two lighting options on separate occasions for the client to evaluate; the first was a static lighting scheme, the second was animated with changing colours. The client chose the second option,” explained Marcus.

It was crucial that the installation was as low impact and non-invasive as possible with a clean and unobtrusive visibility profile when not in use. Due to the tunnel being in constant use by the general public, this required installation in a secure and safe position along the tunnel’s length. Marcus continued: “The placement of fixtures was a concern, because of potential mechanical damage by passing boats or vulnerability from pedestrians.

“There was also the challenge of potentially placing the lighting from a floating platform, as the canal traffic can be heavy on occasion. The lighting also needed to be functional, as well as decorative. It had to be discreet, and not cause any glare to either passing boats or pedestrians. The solution was to place the fixtures directly above the handrail of the towpath, which allowed us to keep both the canal and footpath open during installation.”

By mounting the fixtures in an out of reach, elevated position along the tunnel’s roof, as close to one side as possible, it allowed Enlightened to wash two thirds of the tunnel’s arch in a curtain of controlled, programmable light that could, due to its robust design and low power consumption, be used continuously with minimum maintenance for daily utility lighting, or as a spectacular light installation with the ability to transform what was once a dark and foreboding space into a stunning display of vivid colour washes and chases.

To meet these requirements, designers at Enlightened chose Anolis’ ArcLine Outdoor 20MC as it provides excellent coverage while allowing full remote programmable control of colour temperature via its full RGBNW, LED components. Having used these units on some of its favourite installations, Enlightened knew that the choice would be transformative. The Anolis Arcline has an elegant slim profile, which allowed a non-intrusive footprint sympathetic to the tunnel’s heritage. Its low energy and long-lived LED fixtures allow full control of the installation and also the ability to recall favoured lighting states, and even cascade a palette of rich colour along the tunnel’s length.

Seventeen Anolis ArcLine Outdoor 20MC RGBNW non-optical linear luminaires were used above the public footpath along the Grade II Listed tunnel. The chosen luminaires had to be sympathetic to the tunnel’s heritage, which is why Enlightened Lighting, acting as designer and installer, selected the ArcLine range for its low profile, non-intrusive footprint and performance, which would not only make the tunnel safer but also enhance its atmosphere. Marcus was full of praise for the fixtures, citing their “reliability and build quality, IP 67 rating and longevity of drivers” as some of the key reasons for their selection.

Powered and controlled remotely by the ArcPower 384 Rackmount and a single ArcPower 36 allowed for easy installation of the low voltage cable infrastructure, adhering to the strict restrictions of planning.

The lighting design attracted a huge amount of interest from the towpath’s passers-by during installation. With many regular tunnel users very enthusiastic and complimentary of the lighting’s striking effect. Marcus echoed these complements, adding that he was “very pleased with the results”.

“It’s quite stunning,” he said. “It transforms the space from a dark tunnel into a celebration of architecture and light. The visual impact, considering the amount of equipment used, was remarkable. Seldom does a project have such a ‘wow factor’ with such a comparatively small budget.”

Enlightened has extensive experience lighting historic buildings of national importance and has lit many of Bath’s most iconic sites, including Bath Abbey, Pulteney Bridge, Abbey Hotel and St Stephen’s Church Lansdown. Passionate about what they do, the firm takes very seriously the responsibility and privilege of working on architecturally important structures.

Marcus added: “We believe that sensitive and respectful lighting can revitalise and enhance appreciation for a building’s beauty and at night bring to life structures that would otherwise remain hidden. As a proud local company we are always delighted to show the city at its very best.”