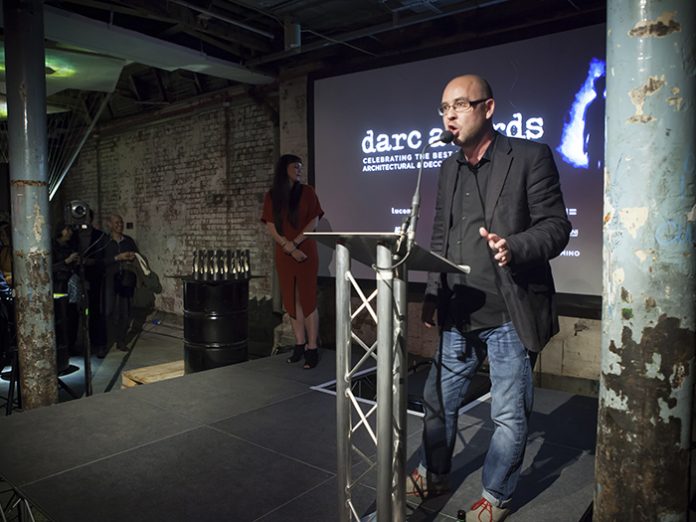 The darc awards and BYBEAU have teamed up to create a launch event for both brands on BYBEAU / Climar’s stand (4.2 E50) at Light+Building at 6pm on Tuesday March 15th.

The Dimple chandelier winning the 2015 darc award for the best decorative lighting product was a major turning point for BYBEAU, an international design studio specialising in high end lighting installations and product design.

Beau McClellan, the artist and designer who gives his name to the company whilst assuming its creative direction, was particularly pleased with the award as this extraordinary luminaire was voted on by international lighting designers as their favourite decorative lighting product.

“I was absolutely delighted to win the darc award – it’s always great to receive confirmation you are on the right track, especially from darc who truly understand our world of lighting, even more so because it was voted on by independent lighting designers all over the world. We make our art for our audience, so something like this feels like a little ovation. The general response after receiving the award has been immense.”

Indeed, the positive reaction to winning the darc award has given BYBEAU the momentum to participate in Light+Building and officially launch the Dimple collection at the show. The Dimple Installation at Light+Building will only reveal itself when a viewer remains still. The installation will be comprised of over 400 mirrored units that surround the viewer in a unique sensory environment. By taking a moment of stillness amid the chaos Dimple will start to interact with you – and the longer you stay motionless the more it will reveal. The project is an exercise in creating a feeling of sentience, with a character and even a voice of its own; a playful, reactive entity expressing itself through light and sound. The debut will mark a new approach to lighting design. Dimple reaches out, invites you to see through it, anything is possible.

BYBEAU’s stand will also be the perfect platform for the official launch of the 2016 darc awards. Whilst darc and mondo*arc are already exhibiting at the show (at 4.1 FOY16), the chance to co-host an event with a darc awards winner was too good an opportunity to miss for the darc awards director, Paul James. “When Beau approached us to do something together at Light+Building, I had no hesitation in accepting. It made perfect sense to officially launch the 2016 darc awards at the show and, to do it with a previous winner has great synergy. We’re looking forward to the immersive experience. It will be spectacular.”

The Dimple unit was always designed as an integration of light into art rather than art into lighting; a unique sensory expression that harmonises with natural light in the day – only to burst into life by night. Light is such a great communicator; so natural and innate. Reactive and sympathetic, it can inform and express our moods and emotions; seeming to have a life if its own.

Of course, awards are all well and good but without commercial success, the process is meaningless. This hasn’t been a problem for BYBEAU as the projects have rolled in since the victory. One of the first was a high end residential project in the Algarve, Portugal. A new plug and play RGBW chip was specially designed to give total control over each unit – the possibilities limited only by imagination. The client has true interactivity; with different moods and ambiences reactive to a range of stimuli. Different temperatures and movements are interpreted and expressed by Dimple to create an art installation of unlimited variability.

The piece was designed to be functional as a more traditional chandelier working with different temperatures of white light, easily dimmable to play with the intensity of the mirror coating. Careful consideration was involved in integrating this piece into the client’s lifestyle, the intention to provide complete control of ambience and mood as quickly and intuitively as possible. Pausing to manipulate technology only serves to distract away from the interactivity of the piece.

When switched on, the pioneering two-way mirror-coated ﬁnish unveils an extra interior hand-blown glass ball. A playful expression of the whimsy of imagination; transitioning throughout the day, a magical twist to any ambiance – Dimple is meant to be used and enjoyed, duality all part of its charm and intention.