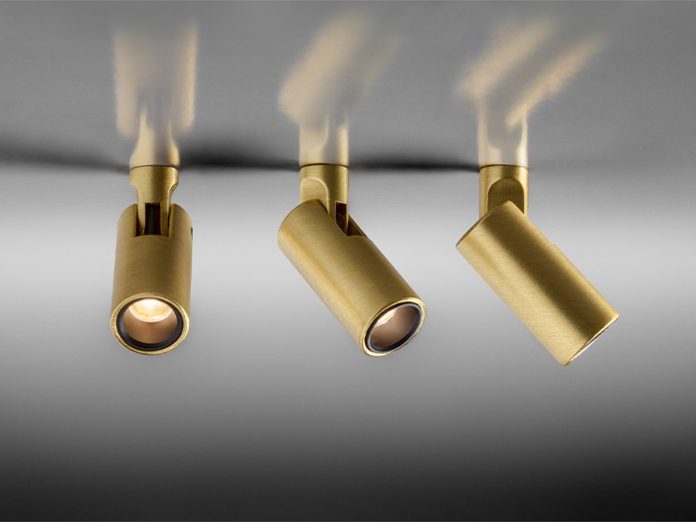 If this product review reflected the size of the luminaire under discussion it would already be well on the way to reaching its conclusion. The DGA Nano Tini spotlight is a very small luminaire indeed.

DGA was founded by Antonio Di Gangi in Florence in 1989 and the first lighting products produced by the company were based on fibre optics for use in museum and architectural projects. These early ranges included downlights, projectors, and linear systems for interior and exterior applications.

The company introduced its first LED lighting systems in 2000 and has invested heavily to create a full range of interior, exterior and underwater LED luminaires. DGA has always aimed to reduce the size of luminaires to the minimum during the design and manufacturing process.

The company undertakes the full luminaire design and development process in-house, including mechanical, thermal, and optical design, as well as photometric testing. The primary in-house production process used by DGA to produce its range of luminaires is NC machining of brass, aluminium, stainless steel, and magnesium materials. The waste material produced by the NC machining process is carefully collected for recycling to ensure minimum waste within a circular economy model. DGA aims to keep as many production processes in-house as possible and undertakes its own LED light engine assembly and powder coating of metal components.

The company currently employs 60 people in Florence and has a sales network covering all major specification markets. Focusing on the specification sector, DGA works closely both with Italian and international lighting designers.

The latest product introduced by DGA is the Nano Tini miniature spotlight, which recently won the [d]arc award for the best interior product.

The Nano Tini lives up to its name and is a very small luminaire – only 9mm in diameter and 20mm long. The miniaturisation in size is made possible by the 5mm diameter lenses used in the range. The design of this range of lenses was undertaken by the DGA design team using one of the standard optical design software systems.

Most of the small spotlights I have reviewed for arc magazine in recent years were based on a 10mm lens, such as the LEDiL Lisa range, and I was interested to compare the performance of the DGA Nano spotlight with these other products.

The sample I was given to test by DGA was fitted with a 30° medium beam lens; it performed well, producing a pleasant, soft edge spot. There were some visible striations in the output when the luminaire was placed close to the lit surface but in normal use in jewellery cases this should not cause any major problems.

The Nano Tini range includes three beam angles ranging from a 20° spot, 30° medium beam and a wide 50°. The light engine incorporates a chip scale LED mounted onto a tiny aluminium PCB. The moulded nano lens incorporates two legs that push into holes in the LED PCB, so the relationship between the lens and the LED could be somewhat variable and that might lead to changes in the beam quality or shape. The medium beam lens in this sample incorporated a series of simple domed micro lens details on the top surface, which are used to control the distribution.

The Nano Tini has a simple but effective construction. The machined brass body/heat sink hinges on the joint with a spit pin to provide friction. The LED board appears to be bonded to the machined body as there is no space for screw fixing, which might cause a few issues with recycling at the end of life. A satin black threaded snoot ring screws into the body to keep the lens in place and provides some glare control. The rest of the metal work is available in five finishes including gold, brass, polished chrome, grey and satin black powder coat.

The spotlight is mounted via an M4 threaded extension to the joint, which gives the smallest possible fixing to the mounting surface within a display case. There are currently three options for fixing the spotlight: a moulded plastic nut can be used to hold the spotlight to a mounting plate; a magnetic base is offered for use with steel panels; and a 19mm diameter surface mount base is available.

The LED light engine is available in five colour temperatures ranging from 2200K up to 4000K, all with CRI over 90. The lumen output with 350mA drive current is 50lm, which rises to 80lm with a drive current of 500mA.

The machined brass body gets quite warm after a few hours of use when run at 350mA. When run at 500mA, it is understood that the spotlight needs to be mounted onto a metal plate of undefined dimension to help dissipate the heat and keep the LED operating at a safe temperature.

The DGA Nano Tini spotlight is the smallest spotlight I have reviewed so far but it produces a useful light output that will be beneficial for the target applications of museum and jewellery display cases. The miniaturisation of LED luminaires continues as LED efficiency rises and smaller packages are developed. It will be interesting to see if there is a lower size limit beyond which there is no additional benefit.