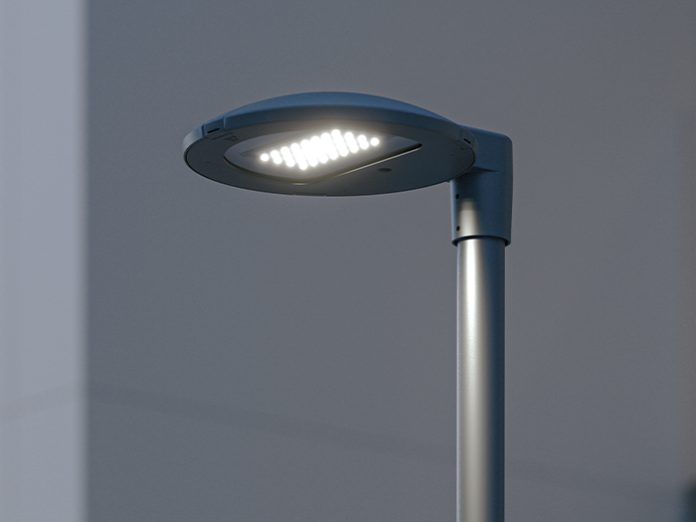 The street lighting sector is currently facing a variety of challenges. Issues manufacturers need to consider when developing new luminaires involve maximising energy efficiency, minimising the impact of lighting on wildlife, ensuring that the products are produced sustainably, and more widely fit into a circular economy model. These are all important considerations, and it is interesting to see how manufacturers respond and are developing their approach. Companies in this market have also needed to develop luminaires and columns that respond to their urban setting, whether the need is for heritage or contemporary designs, and in some cases this can cause a conflict with the wider considerations.

The starting point for David Webster when he founded DW Windsor in 1976 was to produce replica Victorian Windsor lanterns based on the original gas versions to fit onto original cast iron lamp posts. The name of the company is based on the founder’s initials, DW, followed by the Windsor from this lantern. The company has expanded over the years and has developed a wide variety of exterior lighting product ranges. However, the original copper Windsor lanterns are still produced and now even include the option of LED based faux ‘gas mantles’ that mimic the original gas lit effect.

The company, which is based in Hoddesdon, Hertfordshire, UK, now employs around 140 staff. DW Windsor joined the Luceco Group of companies in 2021 and the Group employs around 1,650 people worldwide.

Many of the mechanical components are made in-house although it is understood that pressure die castings are sourced from suppliers in the Far East.

The company has twice been awarded the Queen’s Award – first for Export Achievement and again for Environmental Achievement – the first lighting company ever to be granted this accolade. DW Windsor also previously held a Royal Warrant by appointment to HM The Queen.

The latest product development from DW Windsor is the Daytona range, which is designed for use in a wide range of urban lighting applications, including inner city roads, footpaths, and public spaces.

Unusually for a street lighting luminaire, the Daytona range includes two tuneable white options, from 2200K to 3000K and 2700K to 4000K. The colour temperature can be configured via Bluetooth to create a fixed blended colour temperature output, a time-based colour change sequence during the night or dynamic control via a presence detector where the intensity increases, and colour temperature becomes cooler when motion is detected.

Optics are based on the DW Windsor Diamond Optic range, utilising Ledil lenses, and available in 12 different distributions for different lighting applications. The Daytona is Dark Sky friendly with a ULOR of 0%.

The design of the Daytona features a number of details to ensure long trouble-free working life and ease of servicing on site. The pressure die cast housing is produced in LM6 marine grade aluminium to minimise the chances of corrosion, while the soft disk profile ensures that water runs off, helping to achieve an IP66 rating. For marine applications, a C5 anti-corrosion coating is available instead of the standard polyester powder coating. Windows are available in toughened glass with an IK08 rating or polycarbonate with an IK10 rating.

The product is assembled using mechanical fastenings so that it can be easily disassembled at the end of life and the components either recycled or possibly re-used.

The mechanical design incorporates three over centre catches to secure the window cover assembly of the kind of that would have been found on a previous generation of lamp-based exterior luminaires, and therefore no tools are needed to open the luminaire for servicing. When the window housing is hinged down, access to the LED light engines and the driver is available. The light engines are mounted on a hinged, removable tray, which is fixed to the body casting with captive screws to ensure good thermal management of the LEDs. The light engines can be replaced on site at the end of their 100,000-hour life, or could be changed at an earlier point to take advantage of higher efficiency LEDs that may be available. Once the light engine assembly is hinged down, that allows access to the driver, which can also be replaced on site, keeping the luminaire in service for as long as possible.

Anti-glare shields that follow the design theme of the Daytona can be fitted to control light trespass. Post top and side entry adapter castings for standard pole sizes are available.

The Daytona was designed and developed by the in-house DW Windsor team over a 12-month period during the pandemic and has recently been launched.

It is understood that feedback from specifiers and potential customers has been positive with particular interest in the tuneable white options, and the site changeable light engines and drivers, and the company reports that the overall product appearance is well-received.

The Daytona is a well designed and manufactured luminaire. The tuneable white and 2700K options meet the increasing interest in wildlife-friendly outdoor lighting and the traditional construction fits well into a circular economy model.