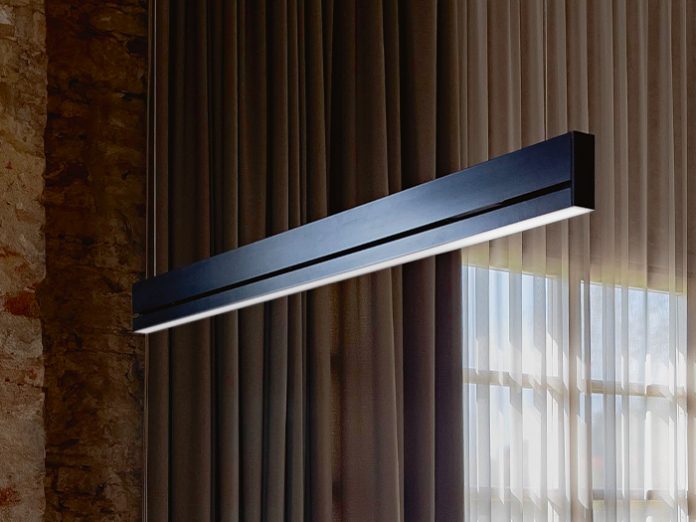 Combining light and sound, the new Rail system from K-scape merges a miniature sound system within a linear light fixture. David Morgan takes a closer look at Rail to see how effective the pairing is.

One of the common traps in new product development is to try combining a number of different functions together in one product in the belief that the combination will achieve more than the sum of the parts. The danger is that, far from achieving synergy, the combined product does not perform any of the functions as well as the individual ones.

K-array, the Italian manufacturer of professional audio equipment, seems to have avoided this problem with its new Rail system, which combines lighting with a high-quality sound system.

K-array, based near Florence was originally founded in Mugello, Tuscany in 1990 by Alessandro Tatini, his father Carlo, and Massimo Ferrati as an audio and lighting service company that offered design solutions for theatres, cinemas, town squares, and events. The problems involved in handling and transporting heavy PA equipment for live events lead to the idea of creating slim and ultra-compact loudspeakers capable of reproducing high quality sound without the weight of traditional products. Since then, K-array has developed a variety of innovative miniaturised audio products including the remarkable Anakonda flexible linear loudspeaker system with modules that can be linked together to produce a 64-metre-long loudspeaker with a profile of only 50x30mm.

It is understood that K-array manufactures its components in Italy and has local suppliers in Tuscany, which is very unusual for the audio industry. K-array products are designed so that at least 80% of materials used can be recycled at the end of life.

One of the latest product developments from K-array is the Rail system, combining a miniature sound system with a linear lighting system. To give Rail a good chance of commercial success, a new division, K-scape, was created with the mission of putting people at the heart of design by merging technologies such as light and sound, which it says will lead to “a more immersive human centric experience to improve its connection with buildings and interiors” for everyday use.

According to Tom Riby, Global Sales and Marketing Manager of K-scape, the initial idea for the Rail system was born while K-array was developing a rigid version of its Anakonda loudspeaker that could connect up to 46 lines of audio. Alessandro Tatini, K-array’s Co-Founder, CEO, and President of Research and Development, had a moment of revelation that Riby summed up in a single question: “We were invading the space of light, so why not explore merging the two worlds together?” And so it was, with audio specialist K-array taking its first steps into the world of lighting.

The Rail system is modular and consists of two extruded 1.2-metre aluminium sections. Overall dimensions are only 35x92mm. The upper extrusion houses the uplight and three downward pointing 1×5-inch full-range cone loudspeakers along with connection and suspension components. The lower extrusion is fixed centrally, leaving a linear gap on either side for the sound to escape. This lower extrusion can house a linear downlight, an array of lensed downlight modules or a low voltage track system into which adjustable spotlights can be attached.

The light engines were developed in conjunction with Nichia and consist of very tight pitch mid power LEDs. With 270 LEDs per metre, an almost dot-free lit effect is produced. A combination of satin silver side reflectors and a number of optical film inserts provide medium beam, diffuse wide or asymmetric distributions. A combination of linear downlight and an array of lensed downlight modules is also an option.

At the moment, only 3000K 90 CRI LEDs are offered. The downward light engine provides up to 3,680 lumens with a power consumption of 33W for the 1.2-metre-long luminaire. The uplight is available with either 3000K or RGB light engines.

The spotlights are also only available with 3000K 90 CRI LEDs and provide up to 501 lumens. A 15° spot and a 25° medium beam version are the only options at the moment. All the lighting elements, including the spotlights, are individually controllable with DALI.

The Rail system is designed to be surface mounted to the ceiling or wall, suspended on airplane wire, semi-recessed or fully recessed into the ceiling.

T and L connectors are available in three lengths to create grid layouts of the system. Finishes for the metal work are standard satin white and black or custom RAL colour powder coat.

Alessandro Tatini and the R&D team at K-array worked on the design and development of the Rail system from 2018 and it was first launched in 2020.

The technology required to produce the very small loudspeakers is quite new and has allowed the overall size of the Rail system to be reduced to such a small size.

The target markets for the Rail system are understood to include offices, retail outlets and museums where the combination of light with sound will be most useful.

According to K-array, the Rail system will reduce product costs by up to 25%, up to 52% on installation costs and also reduce power consumption by up to 35% compared to using separate lighting and sound systems.

The Rail system is a nicely designed and manufactured system, though I did not have the opportunity to fully test the quality of the sound output. It will be interesting to see how easily K-scape is able to penetrate its target markets in competition with the existing multitude of available luminaires. For some projects having a combined sound and light product would be the ideal solution, but would the lighting designer also then be responsible for the audio design? I would imagine that each of the target applications will require a wider range of light source options for power, colour temperature and distribution to meet the likely project requirements. Custom luminaire lengths will also be needed to fill the range of building sizes along with glare control accessories and a wider range of dimming protocols. The Rail system incorporates quite a wide range of options, but it may need to expand on these to be specified on many projects.

Do We Need a Lighting Detox for Sustainable Cities in the 21st Century?