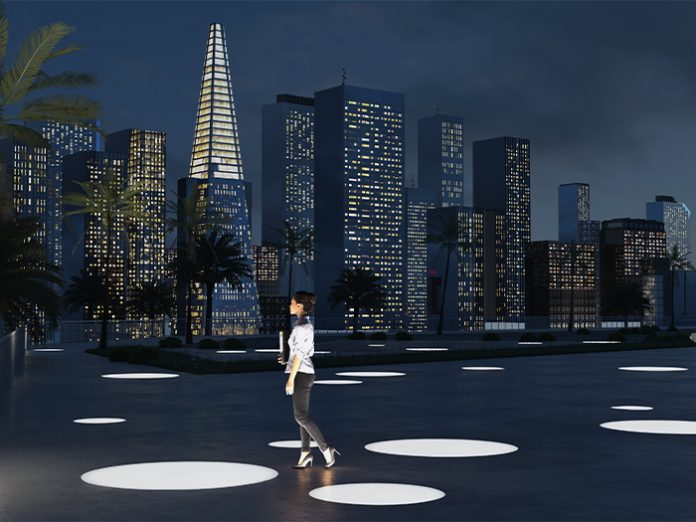 After it took home the KIT – Exterior trophy at the 2020 [d]arc awards, David Morgan was keen to take a closer look at LAM32’s minimumMAXIMUM range of in-ground illuminated panels.

When a recently formed Italian architectural lighting company produces a series of floating illuminated jellyfish for an iconic hotel project in Croatia, the combination of creativity and technical potential is clearly evident.

The unusual name of this company, LAM32, derives from Luce A Misura”, (tailormade light) while the number 32 was the sum of the years of experience of the two founders.

With a background interest in electronics, and after working in marketing for iGuzzini, then for Targetti as a sales agent, Matteo Appignanesi launched LAM32 with a partner in 2007. Their aim was to create luminaires and lighting systems capable of satisfying the needs of lighting designers around the world.

Initial sales came from the design and production of custom luminaires for a variety of international projects including the remarkable Hotel Belleveue concept with Dean Skira in Croatia. This is the project that involved the development of gigantic floating illuminated jellyfish with trailing side-lit fibre optic tendrils; the product and development images are presented in detail on the LAM32 web site.

In 2011 the company introduced the first standard ranges, designed in-house, including exterior-rated Round Evo and Wave projectors, which remain in the range today. The company currently employs 36 people and is located near the Adriatic coast of Italy with sales activity in all major international markets.

This remarkable range includes five different panel shapes and each one is available in five sizes, hence the overall product range name. The first products to be commercialised were the Circles followed by the Square, Rectangular, Line, and Triangular shapes. The luminaires are drive over-rated, being strong enough to withstand 5,000kg loading. Both IP67 and IP68 options are available with the IP68 version being rated for continuous immersion in up to one metre of water.

Apparently, the initial concept for minimumMAXIMUM came from Matteo Appignanesi who then asked lighting designers Francesco Iannone and Serena Tellini from the pioneering Consuline consultancy to develop the full geometric collection. They proposed adding the logarithmic shaped triangles to complete the range and also suggested the ratio for the rectangular types, which are now based on the golden section. The stylish and informative brochure for the range goes into considerable detail about Western and Eastern systems of geometries and how these have affected architecture and design over the centuries.

The construction of the luminaires is very robust as would be expected with a drive over-strength, in-ground panel. The frosted finish, 15mm thick glass is bonded to a stainless-steel body with a 7mm layer of silicone. I was not able to open the luminaire to examine the light engine or diffusion system, but the lit effect is very even in the centre of the luminaire with a 20mm shadow running around the edges where the glass is bonded to the stainless body.

The overall depth of the luminaire body is only 36mm so the diffusion process is clearly effective to give such a uniform lit effect. The heavily engineered stainless steel in-ground housing increases the overall depth to 96mm, which fits into the many projects where a maximum 100mm recess depth is allowed in the slab build up depth to accommodate basement car parking areas. Anti-slip details can be added to the glass, appearing as visible dots on the surface.

The lumen output and efficiency are respectable for a diffuse luminaire of this type, the smallest circular size at 250mm diameter with 3000K LEDs provides up to 1,250lms with a consumption of 15W. The largest round luminaire is the 1,200mm diameter and provides up to 6,350lmswith a consumption of 76W. Standard LED colour temperatures are 2700K, 3000K and 4000K. Colour tuneable and RGB light engines are also available as custom options.

LAM32 undertakes all design and engineering in-house along with assembly and testing. Components are sourced locally from qualified ISO 9001 approved suppliers. It is understood that 90% of the materials used in the minimumMAXIMUM products can be recycled and the light engines can be factory replaced at the end of life, after around 75,000 hours of use.

The introduction of the range was delayed by around 10 months due to the pandemic, but samples have been distributed around the world and it is claimed that lighting designers have responded positively to the project possibilities that the range allows. The first project where the Circle type has been installed was at the Dalma Mall project in Abu Dhabi.