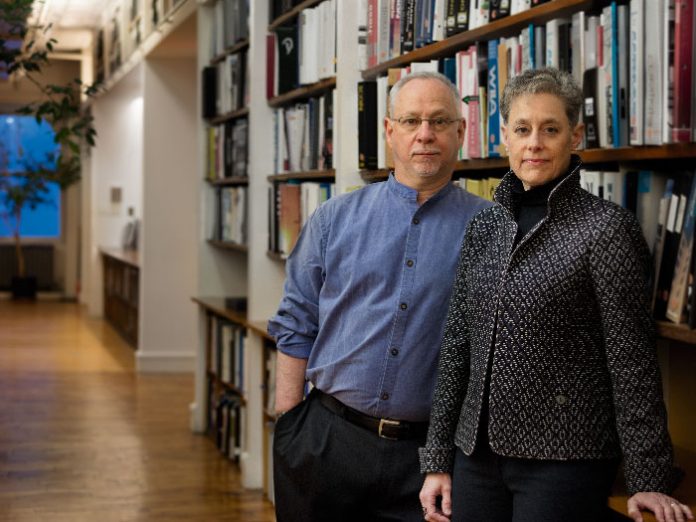 Domingo Gonzalez and AC Hickox share leadership of New York City-based Domingo Gonzalez Associates (DGA), now in its 32nd year as lighting design consultants. Both principals are a study in contrasts, as is their firm. Gonzalez studied and practiced architecture; Hickox was a theatrical lighting designer. Their bright and airy top fifth floor studio is located in a modest vintage building on Park Place in the city’s financial district where a visitor has to look closely not to miss Number 25.

They credit a mix of public and private sector commissions as one of the reasons that their firm has grown to its current number of 20 designers and support staff who are involved in numerous projects around the country. “Both of us have been through a number of recessions in our careers,” says Hickox. “We consciously work to maintain a diverse practice and project mix,” she points out. “While we have most often been associated with high-profile public sector commissions, we welcome private sector projects by taking on just about any and all opportunities that land on our front door.”

“Quite frankly,” Gonzalez indicates, “when we are asked, ‘Can you help us with this?’ we say, ‘Yes, sure.’ We’ve found that our ability to say ‘yes’ has made for very interesting experiences that have been rewarding over the years.”

Their primary practice areas are education, transportation (Hickox is a long-time train buff), historic preservation (a favorite of Gonzalez), corporate, and landscape projects.

“When examining possibilities on any complex project, there is a certain amount of drilling down that we often have to do,” Gonzalez believes. ‘‘In many ways, the right lighting solution starts with familiarising ourselves with the project typology. This strategy explains our interest in understanding why and what is most appropriate to a given kind of project. Simply stated, the way we approach a school is not the way we address an airport. The way we approach a hotel is not the way we plan for a library, or a medical project,” he explains. ‘‘The final product is often a result of this investigation, combined with an understanding of technique, technology, sustainable goals, budget, and identifying the owner’s particular interests.”

Hickox had been a theatrical lighting designer before joining DGA in 1999. ‘‘I grew tired of solving the same stage lighting problems over and over,” she states. As a result of this, she decided on transitioning to architectural lighting design and accepted Gonzalez’s offer to become a full-time member of DGA.

“As an architect-led firm, we have a deep interest in buildings and how people will experience the lighting in those buildings,” Hickox points out. “We are very architecturally focused, individually and as a firm,” she says. “Domingo and I have a similar problem-solving approach even though we have very different backgrounds. We both want to understand a project’s constraints and use those constraints as jumping off points for problem solving,” she notes. “Within our body of work, we do have our technical side. But we pay a lot of attention to understanding the character and identity in a project that is not only appropriate in expression but also wonderful to experience.”

Gonzalez has long been fascinated with the many paths leading to becoming an architectural lighting designer. “Educational programs in architectural lighting design were quite unknown to me when I was starting out in practice 38 years ago. At that time,” he explains, “there were no front doors to architectural lighting…there were only back doors and side doors. Today, because of excellent educational programs such as those at Parsons, Penn State, and the Lighting Research Institute at RPI as well as several programs in Europe, there are now many front doors where young people can actively pursue their interests in this field that weren’t available before.”

Hickox agrees that the firm’s staffers who are trained as architectural lighting designers…‘‘can really perceive light, and apply it to their projects. Our staff is the best! We have a remarkable group of dedicated lighting designers who can problem-solve, render, calculate, illustrate, and detail. Domingo and I have worked very hard to provide opportunities that nurture a very fine group of excellent professionals.”

Gonzalez enthusiastically agrees: “Our interns are fabulous! We have a core group of interns, many of whom started while still in high school. One young lady interned for five years here when in high school, and then went on to study at Cooper Union. She stayed with us for a year afterwards as a junior designer, and then went to Harvard. One of our current interns joined our firm while in high school and is now in his fourth year of architecture school. We like to consider local colleges in our region so these students can work with us in the summers and over winter break.” DGA is also involved with intern programs around the country, having hired students from Northeastern University in Boston, which has a cooperative school/work program.

Staff participation in every aspect of the design process is a critical part of DGA’s project approach. “We try very hard to not pigeon-hole people,” Gonzalez comments. “We will play to their strengths, of course. However, we want everyone to become highly skilled practitioners so they can advance to larger projects and management roles. Our ultimate goal is to cultivate a very strong cadre of well-rounded, ambitious designers.”

Senior designers actively engage with clients during the course of a project. “We are normally there just as back-up,” says Hickox. ‘‘When they need reinforcements, they are free to call Domingo or me. They know they have the ability to handle all phases of the project, win the award, and are responsible to keep the firm moving forward,” she relates. “Much of my time is spent making sure that the staff is properly supported, and that impeccable documentation is executed.”

DGA has created an in-house training program that Hickox describes as robust. “With all of the changes in technology—from conventional legacy lighting sources giving way to LEDs to wireless controls and the on-going evolution of energy codes—there is a tremendous need for continuing education,” she states. “We sponsor brown-bag lunches to understand such factors as optics that are changing with the new technology on the market. So we all have a lot to learn.”

Such ongoing support prepares staffers to maintain involvement with the firm’s often challenging, long-term large-scale projects. Over the years, DGA has completed more than ten million square feet of corporate offices, numerous historic restorations, plus several bridges, schools, and public sector projects that can extend into decades. The firm began work on the 85-acre Brooklyn Waterfront Park in 2003 and is still in the process of a phased completion. The Hyatt Times Square Hotel, which underwent several operational changes, took seven years before opening. The East Side Access project started in 2000 and won’t open until 2019. The re-lighting of Bryant Park in Manhattan extended from 2005 to 2013.

DGA designers bring a very active participation presence to the design process. “We are relatively fearless when it comes to generating ideas, and speaking up on the merits and challenges of certain approaches,” Gonzalez affirms. “We appreciate being engaged in projects from the beginning. We offer expertise and opinions to realise the lighting potential.”

A favorite DGA technique is helping clients to understand a project by generating multiple options, sometimes well over a dozen. He cites the belief that there is not one answer to solving a problem. “Discussion of the alternatives for lighting opens a productive dialogue about what is good, better, and best… examining the costs, constructability, procurement, and other factors so the client can make better decisions. Mock-ups are a critical part of this process in helping them, and us too, to better visualise final results.”

Current projects include finishing touches on NYC’s Second Avenue Subway, now carrying passengers after 156 years of planning, designing, modifying, and updating the design, followed by years of construction. The lighting program included lighting for all four stations plus illumination for the art works in the line’s stations, commissioned by the Metropolitan Transit Authority’s Arts and Design Division from such notable artists as Chuck Close. Other current projects include the upgrade of the c.1919 Brooklyn Army Terminal by famed architect Cass Gilbert who also designed the Woolworth Tower. Other assignments include upgrades to La Guardia Airport, and projects in Washington, D.C., Florida, Tulsa, Burlington, San Antonio, and several large-scale park projects in Chicago.

Sustainability is a large part of the DGA process. All DGA staffers realise the importance of sustainability and most are accredited. According to Gonzalez, the sustainability movement has provided a common language to help designers to educate their clients and has propelled the evolution of code updates. As for the advancements coming thick and fast in LED, he calls it “astonishing. Usable innovation in lighting used to occur once every 24 months. Today, it’s more like once every 24 weeks, or even 24 days.”

Gonzalez cites one important tenet of good lighting that hasn’t changed is to create outstanding lighting installations based on the principle of simplicity and consistency of elements. “It’s like cooking… making a fabulous meal out of very few ingredients. I like to think that everyone’s mother had this sort of talent (mine certainly did).”

In his estimation, a true test of lighting skill is the designer who can work with anything that is dependable and produce excellent results. “Consider the subway projects we completed for Second Avenue that relied on just two types of fluorescent lamps. Despite this apparent limitation, the result has drawn considerable praise, and has become a source of inspiration for the firm’s future. Everyone shares in its success.”