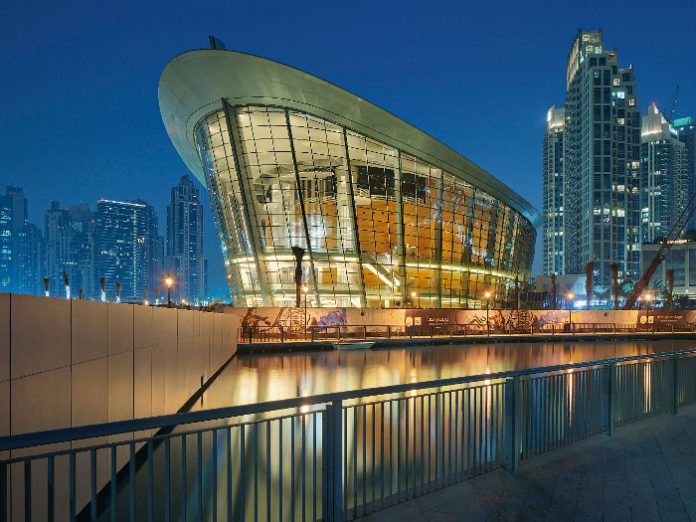 Set to become one of the most significant, vibrant and successful performing arts and entertainment centres in the Middle East, Dubai Opera is a 2,000-seat, multi-format theatre designed by architects Atkins to captivate its visitors.

Officially opened on 31 August 2016 with a sold out performance by Placido Domingo and located within The Opera District in Downtown Dubai, the building is unique for a venue of its size, in that it has the ability to convert into three modes; from a theatre into a concert hall and into a ‘flat floor’ form, offering 2,000m² of space for events such as exhibitions and gala events.

It is set to become a hub for cultural activity, entertainment and artistic expression, while playing its part in creating a vibrant local community for residents.

Dubai Opera aims to transform the emirate’s cultural footprint and establish the city as a part of the elite global theatre circuit – providing a vital new draw for the tourist industry – a cornerstone of Dubai’s economy.

With regards to the lighting design, neolight were appointed in early 2014 and given a brief to create a fully flexible environment that showed off the stunning architecture and interior, designed by WA International, in the best manner during the evenings, whilst still being energy and cost efficient.

‘‘This design intent remained broadly consistent throughout the lifetime of the project and allowed us to develop our design and ultimately deliver a successful lighting scheme,’’ explained Gary Thornton, Senior Project Designer, neolight.

neolight were employed from the full concept stage through to completion for the lighting design at all front of house and landscape areas, plus the completion of the auditorium lighting scheme, which was designed by Light + Design Associates.

‘‘We have worked with both Atkins and WAI on previous projects so it was an excellent fit working alongside these consultants and building on previous relationships,’’ said Thornton. ‘‘Likewise we are currently working on multiple jobs with Mirage Leisure at the moment so that was a great opportunity to extend our working relationship together.’’

The brief required an emphasis on the strong architectural elements such as the ‘dhow’ feature. This was taken as an opportunity by neolight to consider this as the main beacon and focus of the façade lighting design.

A beautifully creative solution was produced using diffuse light located within the main structural columns that bathe the wooden walls of the auditorium dhow in a golden softness, bringing it to life at night. The LEDs hidden in the columns are high output, high efficiency RGBW for a lovely warm white output and have the potential for full colour change to meet any specific show requirements, which has already been used to excellent effect in conjunction with the recent performances of Les Misérables.

The lighting experience starts on the approach to the venue. From the external perspective it is the interior glow of the dhow that provides the beacon and focus of the building. Recessed LED marker lights draw you towards the entrance, guiding you along the plaza and through the gobo projections that create a dynamic and visually exciting lead up to the building, enhancing the expectations of what the public will experience once inside the Opera House.

“After numerous concepts and iterations for the façade lighting we made a bold decision to have no specific façade lighting on the exterior of the building,’’ explained Thornton. ‘‘Instead we focused on the interior space and having the impressive dhow shape of the architecture accentuated by allowing it to fall into silhouette and letting the interior lighting sing out through the special anti-reflective glazing designed by Atkins.’’

Around the full circumference of the building the dhow is illuminated by internal columns that appear to run full height and are lit through with a series of bespoke lighting fixtures. They allow seamless glows of light to resonate throughout, piercing the building levels and complimenting the interior material finishes.

The glass allows anyone in the vicinity to look through and see the interior promenade space of the building, “effectively transforming theatre-goers into performers for the local community by blurring the lines between the interior and the plaza”, commented Janus Rostock, Design Director and Head of Architecture, Urban Design & Masterplanning, Atkins Middle East. In comparison, traditional glazing would only allow you to see the reflections of neighbouring buildings.

With an emphasis on indirect lighting there were no downlights used for the general lighting in the promenade space, but instead cold cathode within the ceiling slots and coves is supported by integrated LEDs that illuminate the escalators, main lift structures and bars in an elegant yet subtle manner. These layers of light combine to provide the general ambient lighting as well as highlighting elements of the interior design to retain a strong visual aesthetic for the guest experience.

All areas are lit using highly efficient light sources. LED was primarily used for its low power, high output and compact form factor for detailing, but the ceiling coves throughout the promenade levels are homogenously lit with cold cathode so that the project was produced in good balance with the budget constraints and the requirements of Dubai Green Building Code.

‘‘In doing so, we managed <5W/m2 for the front of house areas (for architectural lighting), adhering to all requirements whilst providing a visually stunning solution that successfully delivered on the brief,’’ added Thornton.

A lighting control system allows for the dimming of all light fixtures to create programmed scenes of varying intensity and mood, altering the look and feel of the space for different occasions and scenarios.

The neolight team faced an initial challenge within the auditorium when they took on Light + Design Associates’ lighting design. ‘‘We were met with a number of constraints and features, including the ever-changing advancement of the auditorium space that required constant coordination and development of multiple design layouts across all disciplines,’’ explained Thornton.

Although there were changes and some fine tuning elements to be made to the scheme, neolight were able to see the concept through to construction and retain the excellent design intent.

Coordination between multiple consultants based in multiple countries was paramount and, at times, proved challenging. In addition to neolight’s architectural lighting scheme, coordination and collaboration with the theatre consultants Theatre Projects was required to resolve the over-arching challenge of providing a lighting scheme that was flexible enough to cater for a multi-format venue.

‘‘The lighting details, fixture locations and control circuits that we designed and executed had to work across all modes,’’ continued Thornton. ‘‘This meant working out all of the logical control circuits for the light fixtures to feature in any of the format modes, as well as working with manufacturers to design a number of bespoke light fixtures that could meet the requirements.’’

As the project developed, virtually all the lighting details within the auditorium space were iterated and improved in line with the increasingly complex site conditions, having to amend circuiting, manage DMX cable routing, and design plug-and-play style cable management systems to allow for a number of flying walls, rotating mobile boxes, seating wagons, staging sections, and a proscenium arch, which all to need to move seamlessly depending on the required mode.

The Vexica linear uplights that graze the wall panels from within the skirting all around the auditorium, and the Remote Control Lighting remote control spotlights within the moveable ceiling are particularly great examples of the fixture customisation used on this project.

Another challenge neolight faced was the timeframe required to complete the project. ‘‘Throughout the project we found ourselves being forced to react to site conditions and detailing much quicker than we would have liked, whilst trying not to compromise on the design intent,’’ said Thornton. “The flip side of this speed is that you get to see your design realised extremely quickly, with the site developing and growing each day that you visit.’’

Although well versed in the fast-paced construction industry of the UAE, this project had its own fixed schedule of events that put tremendous pressure on the construction site, which meant that neolight and most other consultants and trades were working to the very last day.

On opening night there was a very small window of opportunity for commissioning and programming of the lighting once the lighting control system was installed and working. Much hard work from the neolight team and many late nights spent testing and commissioning the final lighting levels and scenes paid off and meant that the space could open looking and feeling great.

The list of sell-out shows and events following the opening night meant that there was no real time to go back in and amend things, even after the opening night. This added further pressure to ensure neolight delivered a successfully functioning project until the team could get back in for the final adjustments, which it carried out January 2017 when there was a break in the performance schedule.

Reflecting on the task, Thornton commented: ‘‘We have worked on many high-end and prestigious projects, but this was one of the most high profile and eagerly anticipated from the general public and Middle East region as a whole. The building is the central focus of a newly defined Opera District in the already impressive Downtown area of Dubai and has been dubbed ‘one of the most prestigious square kilometres in the world’.’’

Dubai Opera opened to huge success and critical acclaim, with the lighting playing a huge role in that. It reinforces the architectural vision of the venue and complements the interior for both function and aesthetics.

Simple where needed and more creative where the situation allows, the majority of the lighting is indirect to provide maximum comfort and minimal glare for all visitors, whilst balancing carefully with the spectacular FF&E lighting to provide the ultimate visual aesthetic and ambience.

The dynamic and flexible design demonstrates a creative interpretation of the architecture, serving to define the building as a world class venue for the performing arts.

‘‘The project for us is still ongoing. Since opening night over six months ago we have supported the construction of the new rooftop restaurant that is opening, as well as making some minor adjustments for the final scenes within the auditorium earlier this year,’’ concluded Thornton.