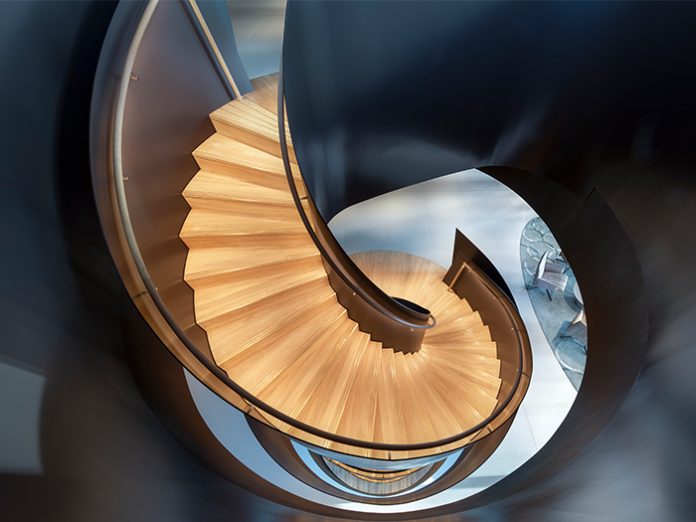 Freshfields Bruckhaus Deringer (Freshfields), is one of the world’s leading legal practices and a member of the prestigious ‘Magic Circle’ of London-based solicitors. The company has recently relocated its headquarters, moving from Fleet Street to a new development at 100 Bishopsgate in the City of London.

Lighting designers at 18 Degrees worked closely with interior architects ID:SR to develop the lighting strategy for both the front and back of house areas of the new workspace, spanning 15 storeys.

Paul Beale, Co-Founder of 18 Degrees told arc about the collaborative nature of the project. “ID:SR are not restrictive in their work. They don’t say ‘we want you to use this light in this place’, instead they told us what they were trying to achieve with the space – the look, the feel, the type of people using the space – and asked us to instruct them on what was needed. When your collaborators think that way, it always leads to the best outcomes.”

The collaborative approach in the design led to a lighting system that sits in harmony with the wider interior design, forming a part of a visual journey that takes visitors from the reception spaces through to the client-facing areas, the practice floors and back of house areas.

Beale continued: “The spaces had to make sense visually, when you go from the reception, right through the journey of the building. Lighting had to support and reinforce that concept.”

While light was used as a wayfinding, navigational tool within the building, 18 Degrees also aimed to create a comfortable environment for the office workers. Maria Favoino, lighting designer at 18 Degrees, explained: “We wanted to make sure that they were happy with the light levels, because some of the client staff still work with paper documents and spend a lot of time reading. Within the mock-up stages, we took inspiration from volumes of light. We studied the different layers of light, and established that it couldn’t just be downlighting; we had to do something more that would give us diffuse light, and different options for people.

“There were daylighting studies looking at how we could implement different layers of light – not just with a table lamp, for instance, but maybe with an uplit element too. The central part was defining the user of the space, and at the same time creating this wayfinding element to help them to the coffee point or the break areas, for example. It was also important that these spaces have a different level of light, to give the user the feeling of being in a different space, taking a break from work.”

“That sort of fluidity in terms of how a space can be adapted to different uses throughout the day, that’s why those layers of light are built in,” Beale added. “It might be an uplight, or light directed at the wall, or table lamps, as well as the standard lamps that come from above.

“It’s a lighting scheme designed for people. We didn’t look at it with the approach of getting 300-500lx on the desks. No one talked about lux levels. The conversations were all about how it has to feel, who is going to be using the space, how they arrive at the building and what that journey is.”

Taking a special focus on the people using the space also led to a number of challenges for the lighting designers, because of the wide scope of people working for Freshfields. Beale continued: “We’re catering to everyone from fresh-faced graduates who might be 21-22, through to some of the partners who may be in their mid to late 70s. As our eyes degrade and our eyesight deteriorates with age, how do you light a space that caters for a 78 year old that isn’t going to be too bright for the 22 year old?

To do so, 18 Degrees managed the various layers of light through the lighting control system. This included the introduction of elements such as presence detectors and daylight sensors linking to the window blinds, which in turn resulted in a more simplified control system for the end users. “A lot of elements don’t need to engage with an interface if you’ve got an inherently tunable system,” Beale continued. “And then the fine grain control can come from the users. If it’s arranged in such a way then the interface with the user can be something really simple, and that’s what we’ve got here.”

While the increased controllability aids staff wellbeing, the project has also been carefully planned to minimise its environmental impact too. Freshfield’s tenancy is powered from 100% renewable energy, and the LED system and associated controls helped the project to achieve a BREEAM Excellent sustainability rating. The new fitout has also resulted in a 30% energy saving compared to Freshfield’s previous location.

And Beale believes that the decision to use top quality fixtures helped in achieving this status. “We’ve got really good quality lights in there. The light within the space has a very high colour rendering, etc. You walk into the space and one of the first things that you notice is that the colours are really vibrant. Because of that we didn’t need to put too much light into the space to make it feel well lit.

“Sometimes, projects that have an environmental agenda can tend to feel gloomy, or like they’re trying a little bit too hard, and as a result you don’t end up with a very nice space. Here, you walk into the space and think “wow, this is a really nicely lit environment”.”

The high quality architectural fixtures throughout are offset by a range of beautiful decorative pieces, from large pendants in meeting rooms to striking chandeliers in the reception spaces. This again was built on a strong collaborative relationship between 18 Degrees and ID:SR.

“It was a real collaboration between the interior designers and ourselves. Fortunately, they have a superb design sensibility.” said Beale. “We’ve got a custom Roll & Hill pendant in one of the meeting rooms, which is more of a sculpture. It’s just incredible. We’ve got a few really beautiful signature pieces like that throughout.”

Favoino added: “We always collaborated and selected items based on what the space would be used for, what team would be working there, etc. The interior designers were always open to our suggestions. They were also really careful about the materials as well. There were metallic finishes in some areas, while in others it was softer. It was always in balance with what was surrounding it – the carpet on the floor, etc.”

“We hid so many lights, for instance in the meeting rooms there is a blackout blind and then a sheer hanging down. There are concealed lights behind the sheer curtain tracks; all you see is a wonderful glow to the drapes. You can’t see the light fittings, but you get this beautiful effect. This was just one of the layers that we introduced into the scene within that room to give the client the flexibility to use it for a whole range of different functions.”

The use of hidden lighting elements is also on show at the striking central staircase. A huge, spiral structure connecting the client-facing floors, the staircase is one of the highlights within the workspace, but rather than shine a spotlight on it, 18 Degrees opted for a more subtle approach, illuminating it with recessed handrail lighting, courtesy of The Light Lab.

“The staircase was a key part of the project, and a combined effort from all parties,” Favoino continued. “The architect wanted to create this sculptural element between the client floors. We thought about how we could highlight this in a soft way, and decided to just use handrail lighting.”

Beale added: “It’s one of the main focal points of the space. I don’t think there is any one singular focal point, instead there are a whole series of moments, but that’s certainly one of the highlights.”

While many projects of this type may employ the services of a lighting designer for the front of house, client-facing areas, a more integrated approach was taken for Freshfields, with 18 Degrees delivering lighting in all spaces. This enabled a seamless visual transition between the spaces, acknowledging that the staff are the company’s most valuable asset and linking their work environment with their wellbeing.

Beale explained how the lighting provides a sense of connection throughout the building: “There is a consistency in terms of colour temperature and quality of light, colour rendering, etc, but within that, there’s scope for varying the intensity of light to suit the operation and the mood of the space, whether it’s a reception space, a dining room, a room for video conferencing, or circulation on the stairs.

“Each of those spaces can have its own personality and some might be lit from overhead, some might be lit more with lamps, and then spaces for video conferencing become a bit more technical with a higher degree of control. But there is a consistency with the colour temperature and quality of fittings.”

The level of consistency that a more integrated approach brings to the project is something that Beale believes makes it stand out as a piece of architectural lighting design, not least because it allowed his team to truly make a difference, whereas in other, less coherent projects, that may not have been possible.

“One of the best things about this project has been that we were able to design the lighting not just for the front of house, but to the wider space,” he concluded.

“The reason that we get out of bed in the morning is to try and make a difference through our work. You can only make a marginal difference if you’re lighting a space that someone is going to walk through for 25 seconds to then sit at a desk where they don’t see that light again until they go home.

“We had the privilege of lighting spaces that people are going to experience day in and day out throughout their careers, ranging from the very young to the very old. That is so rare as a specialist lighting consultant, and that was the highlight of the project, for me, being able to make a difference across such a vast scope.”