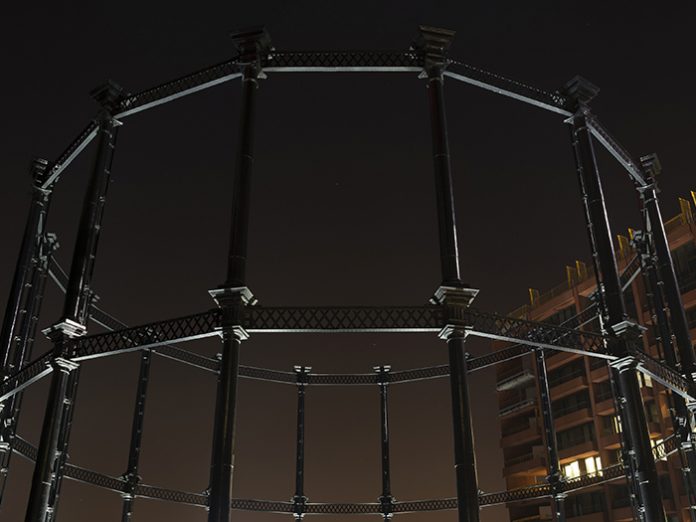 Located in London’s King’s Cross and winner of the Spaces High Budget category in this year’s darc awards / architectural, Speirs + Major’s lighting of Gasholder No 8 uses astronomy and the lunar calendar to highlight the iconic structure and the new public pocket park and event space found within.

Located in the northern residential quarter of London’s new King’s Cross redevelopment, Gasholder No 8 is the largest of the iconic gasholders that once dominated the skyline in the area. This magnificent heritage structure has undergone a major offsite restoration and been repurposed as the frame to contain a new public pocket park and event space. Bell Phillips Architects added a mirror polished stainless steel canopy and a landscaped lawn to create a tranquil green space for use by local families and the children from the neighbouring school.

With a long standing involvement in the wider King’s Cross regeneration, lighting designers Speirs + Major were engaged to ensure that the new ‘Gasholder Park’ would be as attractive and as usable by night as it is by day.

The lighting is designed to ensure that park users feel safe and secure as natural light fades, but also to make the most of the uniquely juxtaposing materiality and forms of the new park. The circular layout led to the idea of using light to create both a beautiful night-time landmark and an enlivening immersive experience inspired by the idea of a solar eclipse.

In an eclipse, the form of the moon is revealed by a soft corona of light, which shifts in intensity and position as the sun and moon move relative to each other. Within the park, each of the canopy uprights are uplit with cool white light on the inside using a very narrow beam that enforces the architectural rhythm. This light reaches the interior of the canopy and is reflected back onto the path, creating a glowing ‘corona effect’ that highlights the circular form and creates a sense of enclosure.

The historic gasholder frame itself is uplit with cool white light from the inside. The resulting silhouette is not only highly legible from a distance but also creates the illusion that the light is emanating from the corona generated by the interior canopy. This reinforces the sense of enclosure, marking the park out as a truly special place to be.

As with a solar eclipse, much of the beauty of the experience lies in how the light animates the form as it moves. The pavilion lighting is programmed over twenty minute cycles, beginning with all lights on and cross fading from east to west over three minutes, followed by a pause of two minutes in darkness (full eclipse) and then a slow east to west cross fade back up to full brightness. This creates fabulous shifts in the shadows and inter-reflections from the polished surfaces, gently animating both park and users.

The management of the lighting program is based on an astronomical time clock, with the timing of the light cycles also changing in accordance with the lunar calendar.

The light scheme is completed with warm white lighting to the steps and ramps neatly integrated into the handrails to ensure the safety of all visitors to the park and to integrate into the wider public realm.