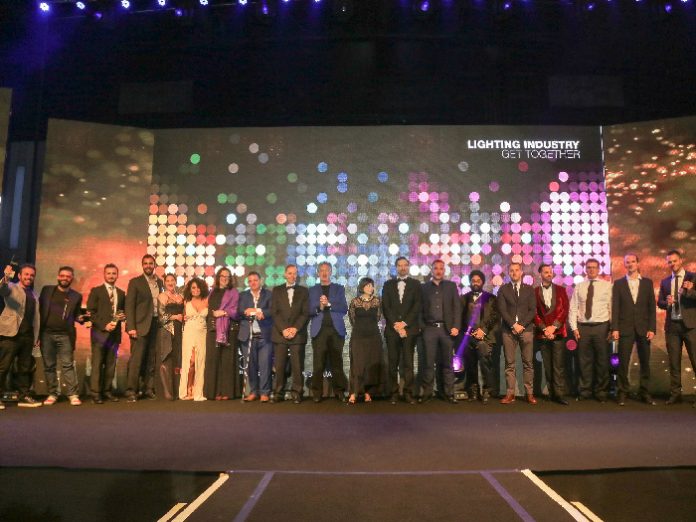 (UAE) – The twelfth edition of Light Middle East has been declared a success by organisers and exhibitors alike.

A glittering awards ceremony capped off a successful three days at Light Middle East 2017, where a dedicated student showcase and the launch of the region’s first institute dedicated to lighting education and knowledge were among the many highlights.

The 12th edition of Light Middle East concluded on 19th October 2017 at the Dubai International Convention and Exhibition Centre, drawing in 5,755 visitors from 84 countries.

Showcasing their latest products and solutions were 345 exhibitors from 30 countries, with global manufacturers and regional distributors mixing it up with their latest innovations, from smart home lighting and controls to LED street lights that integrate Wi-Fi, electric car charging stations, CCTV, loudspeakers, and motion detection sensors.

That was before the 5th Light Middle East Awards, where 700 industry professionals gathered at a gala dinner to celebrate the best in architectural lighting and design, as a shortlist of 40 projects and 29 products contested for the ultimate accolade across nine project and six product categories.

The shortlist was drawn from more than 250 entries, with the most hotly contested category being the International Lighting Project of the year, where entries from France, USA, UK, Germany, and Italy made the cut.

Abu Dhabi’s Khalifa University, The National Museum of Oman, and Lightscapes at the Venice Architecture Biennale 2016 were among 15 winners on the night.

Khalifa University was the only shortlisted project to be nominated for more than one category this year, with the UAE’s top ranked university eventually winning the Exterior Lighting Project of the year.

An award also went to Team One from Heriot-Watt University in Dubai for their lighting project at Light.ication, a popular student competition at Light Middle East in collaboration with design studio Light Func. The initiative is aimed at nurturing the talent of future designers, where university teams, with the guidance of design studio professionals and equipment from Light Middle East exhibitors, conceptualise and display their own inspirational lighting installations during the show.

Think Light was the launch platform for the Lighting Institute, the Middle East and Africa’s first virtual lighting design community that raises awareness of the profession and provides dedicated industry training courses throughout the year.

Meanwhile on the exhibition floor, returning major local companies such as Debbas, Cinmar Lighting Systems and Huda Lighting were presenting their latest services and innovations from global partner brands, while the likes of HCC Lighting and BMTC were exhibiting at Light Middle East 2017 for the first time in many years.

Light Middle East has established itself as the region’s number one networking and sourcing platform for the entire scope of decorative, architectural, outdoor, and indoor lighting solutions, attracting a wide range of visitor profiles from around the globe.

The international flavour was underlined by country pavilions from Italy, France, and the UK, while 52 UAE exhibitors took up 2,130sqm of exhibition space, an impressive 27% year-on-year growth over the previous year.

“A large number of major industry players were on board again this year, while the many new companies that took part reinforces a bright future for the regional lighting sector.

“The latest in innovative technology as well as key insights into the road ahead for lighting technology and design was on offer, while the exhibition continues to be the premier launch platform for global players looking to engage with this promising region,” Pauwels added.

The 13th edition of Light Middle East returns In October 2018.