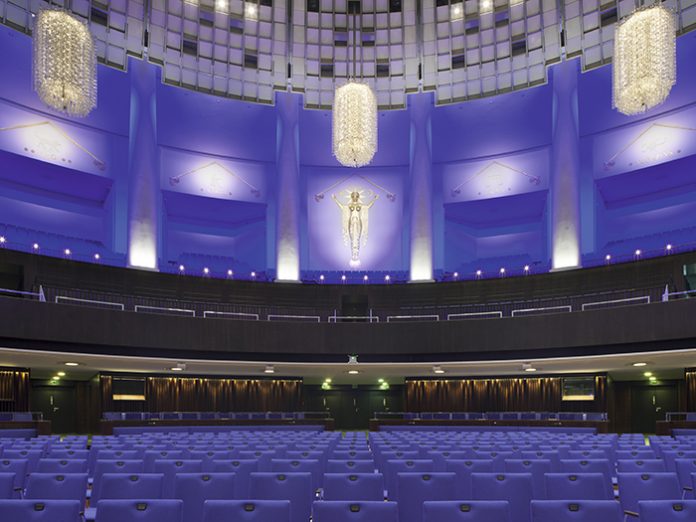 Highlighting the historic significance of the building’s interior architecture, vogtpartner’s lighting scheme combines the adaptability of modern technology and the illusionary power of colour at the Hannover Congress Centre in Germany.

Following this, the lighting of the Hannover Congress Centre was completely redesigned as part of the overall renovation of the building, which was inaugurated in April 2016 by German Chancellor Angela Merkel accompanied by US President Barak Obama. The new lighting design allows for greater flexibility in the use of the hall for both small and large venues and contributes to an entirely new experience of the space.

“The vastness of the historical space and having to create an atmosphere that did this historical space justice made this project different from others,’’ commented leading lighting designer on the project, Matthias Wilcken-Frey.

There were many demands presented to vogtpartner in the brief, but the most crucial one, expressed by artists themselves, was to make the enormous space feel smaller, for smaller events. “Artists don’t like to perform in venues when the upper levels are completely empty,’’ said Wilcken-Frey.

The speed with which the project and the entire interior renovations took place meant that the hall remained a construction site, filled with scaffolding, throughout the renovations. Therefore vogtpartner weren’t able to test its conceptual ideas on site. The only way around this was to do some tests at different locations and in simulations.
With the removal of former acoustical components above the stage area, the entire ceiling becomes more noticeable. Suspended above the stage are now freely arranged pendant luminaires that evoke the image of a transparent ‘light cloud’.  The luminaires can be lowered or raised as a group and are dimmable. Their highly specular surface reflects surrounding colours, making them almost invisible.

Audio requirements were fulfilled by suspending the necessary audio components between the pendant luminaires, integrating them perfectly in the light cloud. Additionally, the pendants are equipped with indirect light sources to brighten the ceiling above the stage.

The folded surface material of the stage backdrop is grazed with a gradient light that can change to any colour, including a glowing white. A perception of depth is consequently evoked in the beautiful background. The row of architecturally pronounced pillars can likewise be highlighted with either white or coloured light, bringing an additional, working layer of light to the overall lighting composition.

Carved reliefs, such as the zodiac signs and the so-called ‘light goddess’, which had been walled up for decades, have again been exposed on upper-level walls and accentuated with precise, focused light. These sculptured, historical reliefs complement the overall ambience, becoming festive, architectural elements that re-tell the historical origins of the building.

With the performers in mind, the vogtpartner team wanted to prevent the sense of emptiness when upper level seats were unoccupied. They thus installed blue linear LEDs to create, at the right luminance level, a transparent curtain of radiant blue, reducing dimensionality and making the hall feel smaller and more intimate.

Dimmable, brilliant light points that were added to the upper level railing frame the setting and add a festive ambience, especially for gala balls.

“The lighting for such events is different than for larger ones, as it’s different for gala balls, classical concerts, rock concerts or assemblies. Therefore the right lighting had to be flexible lighting,’’ explained Wilcken-Frey.

The seven historical chandeliers, each consisting of over 1,000 crystal elements, used to supply the hall with general ambient lighting. This role has now been taken over by newly installed down lights in the dome ceiling, allowing the restored chandeliers with their brilliant, sparkling points of light to act as decorative lighting creating a festive ambience.

The open ceiling in the middle of the hall is now illuminated with the soft glow of a twilight sky, giving the room a positive connection to the space above. This soft glow of blue above reminds visitors of the hall’s original cupola, now walled up, and thus builds a bridge from the present to the past.

The new lighting system is equipped with energy efficient LED technology. Special converters allow light level adjustments down to 0.1%, yet still guarantee flicker-free HD filming without shifts of colour. With the help of a lighting control system, different lighting moods can be easily programmed and realised depending on the occasion and use of the hall.

In total, more than 400 new luminaires were installed in the context of the renovation; all of which are 360° glare-free. The maximum connected load (excluding the large pendants) now lies at approximately 14kW. This translates into a reduction in connected load of around 16% with over a twofold increase in light intensity. The use of modern LED technology and custom fixtures has allowed vogtpartner to develop a scheme that is adaptable to fit purpose while highlighting the historic significance of the building’s interior architecture.