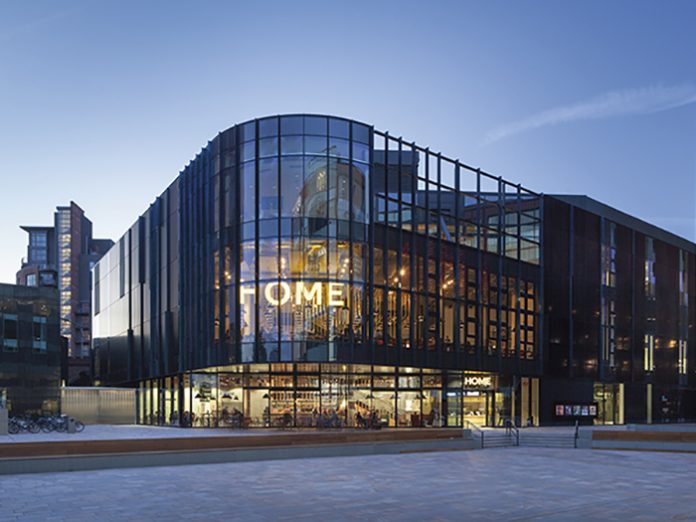 As one of the host venues for this year’s Manchester International Festival (MIF) and co-producer of festival performance Neck of the Woods, HOME is the latest cultural destination to hit the streets of one of the UK’s most vibrant cities.

Featuring international contemporary art, theatre and film, HOME is a bold new centre that commissions, produces and presents a provocative year-round artistic programme and is a space in which artists can create work that interrogates and illuminates our existence and experiences today. Having received a cool £25m investment – with contributions coming from Manchester City Council, the Arts Council England Lottery funding and fundraising including £250,000 from Garfield Weston Foundation and £150,000 from The Granada Foundation – the new space forms the cultural heart of the First Street Redevelopment project in Manchester and it is anticipated that the venue will attract half a million visits a year, making significant economic and social impact to the local and regional economy.

Commenting on the direction of this new cultural hub, Dave Moutrey, Chief Executive, said: “We’ll be a ‘home’ for everyone, staging challenging and critically engaged art, yet connected with our city. We exist to produce outstanding art, create unforgettable experiences, develop skills and make a difference to people’s lives.”

The ‘home for all’ ethos is reflected in the building’s characteristics. Its striking exterior acting as a beacon, while welcoming public spaces and social areas designed in such a way that HOME is inviting to all – a place for making, meeting and socialising. For Mecanoo, working alongside BuroHappold Engineering, identity was key. From the outside, the building’s triangular shape and rounded corners create a strong visual identity. The building, which connects the First Street zone with the city centre, is carefully positioned in its surroundings while visually distinct from the adjacent, commercial developments.

The glazed façade, adorned with irregularly spaced fins, opens up where public areas are located, giving the building a varied and dynamic appearance. The iridescent façade reflects the surrounding city and skies, its colour changing from black to blue to green depending on the weather.

Mecanoo partner Francesco Veenstra commented: “We tried to perforate the façade as much as possible to let daylight into the building, especially in the main entrance.” At night, the building comes alive with help from 65, five-metre Aurora LED strips, neatly tucked in all the way around, illuminating the building’s exterior. At the same time, from inside the lighting acts very much as an attractor at night – the building viewed as a lantern – creating a warm and inviting quality throughout.

Putting the visitor at the heart of the project, BuroHappold provided multi-disciplinary engineering solutions from the ground up. Partner Mark Phillip explained why it was so exciting to be part of the project: “HOME provides a fantastic new cultural hub for Manchester’s community and through the building’s design, this vision has really been brought to life.”

“HOME is quite a demanding space where a lot happens in a small area,” added Laura Phillips, Head of Lighting at BuroHappold. “The material palette adds a lot of drama to the space and from a lighting perspective provides challenges in terms of sufficient visual brightness and bringing out the inherent qualities of the materials used. With the use of the building always in mind, we played with the idea of light and dark. Different lighting languages help to define the different uses and assist with visually organising the space.”

The relationship between natural and artificial light at HOME was, of course, a key consideration as Phillips went on to explain: “Sunlight is allowed into the building in a controlled way and adds drama and visual interest to the various spaces. The lighting was mindful of the transmission from inside to out, where people would be leaving the theatre environment to move outside and so, to help with this, the lighting is at a slightly higher level at the entrance spaces.”

A series of sensors have been fitted at HOME to respond to daylight levels – increasing and decreasing the artificial lighting accordingly. Veenstra commented on the use of daylight in the space: “We deliberately opened up the southern corner to let as much daylight through as possible. The brief was to create an open appearance when you’re looking out from the building, but also when looking into it. It’s not pretentious… The quality of daylight comes from a large window format, four-metre high pieces of glass, at 1.5-metre intervals. The daylight then falls into the deepest part of the floor, reducing the amount of artificial light needed.”

Inside, intimacy is key with the triangular floor plan allowing for a series of unique rooms inhabited within the three corners, including one of the five cinemas. On entering HOME, a combination of suspended and recessed Whitecroft fixtures; suspended Illuma Concepta fixtures; Chelsom decorative glass black pendants; and Inspired By Design bespoke decorative lamps, work within the urban living room layout to instil a sense of warmth.

Very raw materials have been used as much as possible at HOME. Wood and steel are the main ingredients and part of this is a large central wooden stairwell, which acts as the main circulation route through the building – helping to create a strong sense of identity, as Veenstra explained: “For such a dense building, inside we introduced this big staircase bringing people from the ground floor, through the first and up to the second. Covered in wood, which will colour in time through exposure to daylight, it becomes the heart of the building.”

The stairwell makes use of suspended Whitecroft Mirage SX and Illuma Concepta fixtures all the way up – connecting the different aspects of the venue: gallery (also on the ground floor and featuring ERCO Optec fixtures), theatres one and two (featuring GDS Blue Dome and Pro 1, 4 & 8 Cell fixtures) and cinema. According to Veenstra, The decision to use suspended lighting fixtures, rather than hiding everything away, came from the idea of using the building as a machine. Mecanoo’s Ernst ter Horst explained further: “It’s an honest approach that keeps costs down while achieving so many goals. The concrete is exposed and celebrated and the lighting really helps with this.”

The bars and restaurant are located in the areas in between, some of them cleverly integrated into the characteristic stairwell; the restaurant is an essential part of the integrated art and culture concept, with high floor-to-ceiling windows – Chelsom glass black pendant lights and custom made fixtures from Inspired By Design, again create an airy and inviting space. As you move up to the second floor, the roof terrace offers a view onto the square – the rugged concrete floors and part of the walls contrast with the warm oak of the bar.

With the lighting more or less replicated on each floor of HOME, Phillips told mondo*arc of HOME’s lighting brief: “The space was to feel pared back, yet warm and comfortable so lighting was important to create warmth and to direct visitors on the use of different spaces. Early on in the process we established the importance of vertical illumination to key surfaces in order to create a sense of enclosure and comfort to the bar lounge areas.”

Horst adds to this: “The Cornerhouse wasn’t about having fancy lighting features, it was about being honest and appropriate lighting – we didn’t want HOME to be glaring – but still get warm lighting, a nice downwash on the timbers. The fixtures point to the plywood to celebrate the material and shiny concrete floor – celebrating the palette of materials and elements we have in the building. It has been kept very simple from an architectural point of view, but also from a light point of view.”

Summing up the experience of HOME and the challenges the BuroHappold team faced, Phillips concluded: “Brainstorming ideas with Mecanoo was really great fun and then seeing those ideas come together on site was very satisfying. It was important to consider the technical requirements, especially for darker spaces such as the cinema and theatre where there are changes of level, but this did not drive the design. We looked to create the right quality of lighting for how people will use each space, then looked at how the spaces could be stitched together with down lighting and wall washing to provide continuity and assist with orientation.”

As remarked by Councillor Rosa Battle, Executive Member Culture and Leisure Manchester City Council: “The opening of HOME marks the newest high-profile addition to Manchester’s renowned cultural scene – a scene that brings with it huge economic benefits and is a big part of what makes the city a place that people want to live, work and invest in.”