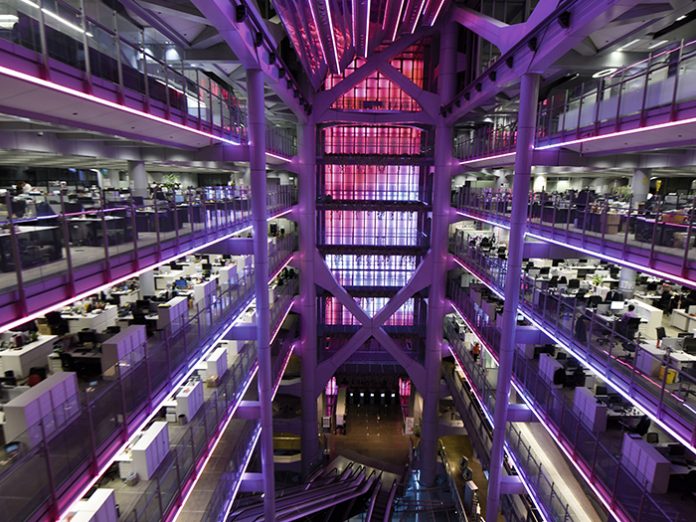 With clean lines of light used to emphasise and support the striking Foster + Partners architecture as well as adding spectacle and drama to the space, the main banking hall of HSBC’s headquarters in Hong Kong is the recipient of considered architectural illumination by MindsEye Lighting Consultants.

The main banking hall of HSBC’s headquarters is referred to as ‘The Cathedral’ thanks to its modern resemblance to a grand abbey. The vast space soars above the glass floor of the main banking hall and is accessed via escalators from the plaza below. The vaulted ceiling is crowned with the sparkle of an immense mirror. The office floors are the galleries and the bridges the cloisters. The eastern elevation contains a grand symbolic gesture, a vast unstained glass window complete with its tracery of mullions and transoms, which extends the full height of the vault.

The idea of lighting the atrium had been proposed more than a year ago by UK-based Mindseye Lighting Consultants. The impetus to develop and implement the concept came from the 150th anniversary of the bank, which fell on the 3 March 2015.

As covered in mondo*arc issue 87 (October/November), Illumination Physics was already engaged on a major project for the HSBC headquarters – the design replacement of all external lighting and the creation of three large media walls, all of which would be used during the nine month long 150th celebrations and beyond, and was again asked to be involved in the Cathedral project.

With no internal core structure, the building is suspended from the steel exoskeleton and the services are hung from this using bridge building techniques. Thus, architects Foster and Partners were able to create a spectacular atrium that soars 55-metres upward from the glass floor of the main banking hall; itself suspended ten-metres above the ground so that an open public plaza can exist at street level. The bank’s customers ride up through the transparent belly of the building via the world’s longest free-standing escalators.

The atrium is eleven stories high. Mounted at the top are a bank of giant mirrors designed to reflect natural light being captured by the computer controlled ‘sunscoop’, a massive articulated reflector mounted on the exterior of the south façade.

At the centre of the eastern façade is the ‘cathedral wall’. This 50-metre high double layer glass wall is transparent on the outside but opaque on the inside allowing natural diffused light to enter, which exposes the remarkable metal structure. The concept was decorative and conceived of a mix of direct-view lighting and back-lit panels. The areas to be treated included the chamfered edges of the floors that surround the atrium, the ‘sunscoop’ mirrors and the cathedral wall.

Creating an internally illuminated light box on the chamfered floor edges proved problematic for structural reasons. Indirect grazing light produced obvious aberrations because of the slight differences between the metal panels. Mock-ups and testing found that a direct view LED strip with a 100% diffused lens would produce the best result. The clean lines emphasise and support the architecture and add spectacle and drama to the space. Previously the upper levels of the atrium were regarded as too dark and the addition of the line of light on each of the five floors which bound the atrium corrected that impression.

The installation process called for a new product to be created – the IP Bar Rail – as a mounting rail was required to hold the IP Bar as the soffit cladding needed to be removable for access to the fire extinguisher system. It was necessary to attach the rail to the stanchions of the balustrade to provide both structural integrity and a method for concealing the power and data cables.

The ‘sunscoop’ mirrors were the subject of several tests using both indirect and direct view lighting techniques. It was not the client’s intention to reactivate the mirrors as a light source per se but to celebrate the design and add drama to a feature that had been left in darkness for decades. An aesthetic choice was made, an IP Bar Rail gave the cleanest and most pleasing result and was also the most practical to install.

The Cathedral Wall was the most challenging of the three features to illuminate. The wall is composed of two vertical layers of glass forming a cavity approximately one metre apart. Between the two layers and the supporting structure are layers of louvered working platforms and a cat ladder system to connect them. All of this has been designed in the finest detail as is visible from outside the building in Bank Street. The aim was to illuminate the inner glass layer from within the cavity whilst keeping the light fixtures and cables invisible.

Illumination Physics’ objective was to illuminate each 1,200mm pane of glass individually, creating a pixel. Content was then created for a variety of dynamic displays that are synchronised with the ‘sunscoop’ and atrium edges.

Mock-ups with both high powered and low powered LED were performed. Since it was not the client’s intention to activate the Cathedral Wall lighting until late afternoon, lower power LED was sufficient and required only 20% of the power. Illumination Physics Linear Graze was chosen, a very slim and compact fixture using the 5050 RGB chip. Its modest dimensions also made it easier to conceal behind a custom designed reflector/glare shield, carefully finished to match the existing metal work.