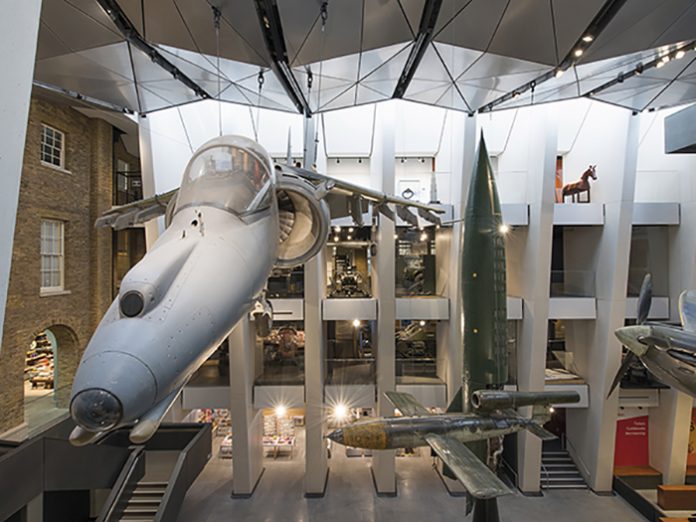 Amid the commemorations of World War I, the Imperial War Museum, London, marked the centenary of the start of the Great War with the opening of its new atrium designed by Fosters + Partners and lit by George Sexton Associates. The atrium, housing the museum’s biggest displays, now has an extra floor floating over it. Part of this floating floor’s job is to mitigate natural light levels but it also provides a surface for carefully focused track and spot lighting to meet the challenge of illuminating displays, including a Battle of Britain Spitfire, a V2 flying bomb and a Russian T-34 tank, that are visible from almost every angle.

“The approach to the atrium, in which we have inserted a new ‘floating’ floor at the top of the space, was designed to bring down the natural light levels,” said Foster + Partners senior partner Michael Jones. “They were previously too high from the existing barrel roof for conservation purposes. The new floor acts as a lighting baffle. It has enabled us to open the central space to the adjacent galleries, allowing a broader cross-section of the collection to be displayed alongside, and in curatorial context with, the large objects in the atrium – these light sensitive objects include textiles, works on paper and other objects with organic pigments. This was a fundamental objective of the museum and has allowed for new readings, angles and perspectives on some of the major objects, such as the Spitfire.”

The Imperial War Museum, described by King George V in 1920 as “a lasting memorial of common effort and common sacrifice”, opened in 1917 but moved to its home in Southwark in 1936. In 2010, the first phase of a £40m transformation began and today, the whole space has been reconfigured to make moving from one gallery to another logical and intuitive. Foster’s long-term strategy for the museum’s interior is based on three themes: clarity and circulation, chronology, and consolidation. Foster designed the vertical circulation to enable visitors to move through the exhibition floors in chronological order from the new lower floor World War I Galleries up to the first floor World War II exhibits and the post-1945 displays intended for the floor above.

The redesign retained the existing glazed barrel vault over the atrium. “The space was very dramatic and loved by people but restricted what we could display because we were getting thousands of lux and everything we displayed has to be very robust,” said Ann Carter, the museum’s head of exhibitions. “So, as part of the architectural development, we have introduced a new floor high up under the barrel vault that allows the light to flow down, but in a more controlled way. This also gave us more exhibition space and we hire it out.”

The transformation also included opening up views from a new lower ground floor, level zero, which includes a cafe and shop; a new opening into the floor of the central hall provides a visual connection to the different levels and draws in daylight deep into the space below.

“Fundamental to this approach was the opening up of the side walls to reveal galleries and allow views out to the park – this changes the way visitors see the collection and improves the visibility of galleries and objects from the central space,” said Jones. “This move has the effect of drawing visitors to explore all parts of the building and discover the whole collection. Circulation throughout is designed to be intuitive – visitors increasingly want galleries to have the added dimension of relationships with each other and the wider setting, rather than isolated spaces. This makes the experience richer, less overwhelming and more accessible. This also enabled us to open the museum up to the park – for the benefit of both.”

“Daylight has to be a part of the design vocabulary both technically and aesthetically. Fosters is a big proponent of daylight and we agree that it is an important consideration in any architectural project – and any museum setting,” said lighting consultant George Sexton. “Typically we like to do physical modelling of a space but the budget, time constraints and design process did not allow that, so we used design software that that we have had a lot of success with in the past, to create a very detailed computer model.”

“One of the exciting things about the atrium space is that visitors are seeing things from so many perspectives,” he added. “It was very challenging. You rarely get to light objects in 360º, where every aspect is on view, as opposed to theatrical lighting, for example, where the viewer is in one position and has a very specific vantage point.”

Throughout the public space, carefully focused track and spot lighting from ERCO and Flos play a major role in lighting displays, guiding visitors and underpinning the logic of the architecture. LED spotlights, floods and washes provide the bulk of the lighting although the scheme also uses linear fluorescents from Encapsulite and XAL and accent lighting from AlphaLED and Viabizzuno.

“The track lighting is integrated into the folds and reveals of the architecture and we used LEDs from an energy point of view and for low maintenance,” said Sexton. The cafe comprises a distinctive waffle ceiling which, while visually impacting, hinders the ease at which an effective and aesthetically pleasing lighting system can be installed. While conventional track is used in the atrium, in the cafe and shop the lighting is on specially designed lattices of cable track, with small luminaires positioned at each of the intersections, custom built by Precision Lighting. The cafe ceiling comprises a matrix of domes – originally, these were to be painted a light colour and up-lit but it was then decided to paint them black. The ceiling is criss-crossed with a web of cable delivering low voltage to 176 customised Precision Lighting PICO LED spotlights, now reversed as downlights.

“The original design created volumetric lighting but when the paint colour was changed, up-lighting a dark ceiling did not make sense,” said Sexton. “But changing to downlighting with same sparkle and comfortable light level was both logical and easy. When you are in a design process you adapt to the optimum conditions of the design and a good infrastructure is adaptable for the long term.”

Ambient lighting in the cafe was provided by the glowing pendant orbs mounted to Precision’s lattice of cables, enabling the interspersed Precision spotlights to add an element of brilliance to the scheme.

“All of our lighting is LED-based,” said Carter. “The shop has a network of Precision Lighting EVO spotlights providing downlight and using long snoots to avoid glare. Both areas are lit with a colour temperature of 3,000K. The shop space you want as bright and as desirable as possible. They used the same type of ceiling lattice lighting on level zero and the main seating area in the cafe, supplemented with a range of other suspended lamp fittings. In the serving area, we have suspended and some wall mounted fittings. Plus, we opened up the windows on to the park from the cafe. We have reduced the number of fittings but I don’t think we changed the concept at all.”

The new events level at the top of the building is lit with Remote Controlled Lighting DR8 spotlights attached to the curving metal framework below the glazed dome, using custom mounting brackets. The space has a number of uses and staff can refocus or adjust the lighting using handheld controllers to suit parties, seminars or temporary shows.

The new World War I Gallery designed by Casson Mann has lighting by DHA Designs and this area faced a different challenge. It has some 1,600 exhibits within just 1,050 sq metres of gallery with more than 300 lights due to low ceiling height, mainly Havells Sylvania Beacon Muse spotlights. “That space was particularly problematic, it is a very complicated space with a low ceiling and the services running across make it tricky,” said DHA Designs Director Jonathan Howard.

“Although it seems counterintuitive, the lower the ceiling, the greater number of lighting positions you need because your lighting positions become more critical. You are doing detail work. Particularly when you are dealing with low light objects and you are closer with the light source, the inverse square rule starts fighting against you because every part of the object is a radically different distance from the light source.”

Carter added: “The World War I gallery has cases with internal lighting but in the atrium we have to rely on the track lighting to light almost everything, the space the exhibition and the labelling, providing enough light for visitors to move around safely without lights shining in their eyes. The lighting designers worked very hard to get that right.”

“Although the luminaires are strategically placed to achieve object / glare balance it took constant shifting and trimming. It was a long process,” said Sexton. “But without a flexible system we would not have been able to shift lights on the infrastructure for optimal effect. If the exhibition evolves or displays are rotated or changed, the track is there, so there is no problem refocusing and no additional construction work is needed.”