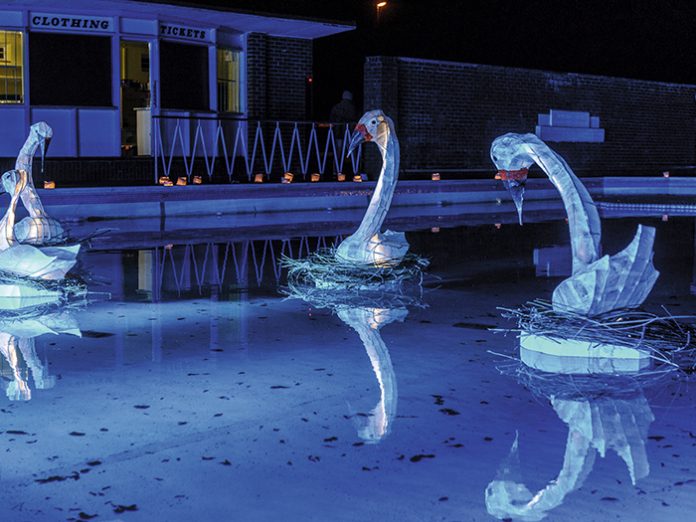 LewesLight is a new light festival launched in October 2015. Taking over the small town of Lewes in South-East England, it aims to promote the town’s history and beautiful architecture, while showcasing the creativity that lives within it.

LewesLight festival took place for the very first time in October last year. A small town in the south east of England, Lewes sits on the South Downs in an area designated as a National Park with an aspiration to become a Dark Skies Reserve.

The organisers of the event had discussed the possibility of staging a festival in the town for a number of years and with 2015 being the UNESCO International Year of Light, it seemed to be the perfect time to realise these aspirations. Festival Director Graham Festenstein is an independent lighting designer with a consultancy based in the town, and as a designer with specialisms in lighting strategy and masterplanning he was able to see the potential and opportunities LewesLight would have for the community. Discussing his ideas for the lighting event with environmentalist, author, journalist and Lewes resident John May who, inspired by images from Lights in Alingsas festival in Sweden, convinced Festenstein to persevere with his plans.

The aspiration was to showcase what is possible, with a view to developing the event as an annual festival of light promoting the town, its history, its beautiful architecture and its creativity. Taking place over a two-day period, the festival included lighting installations, an exhibition, talks and discussion. In the spirit of International Year of Light 2015 the intention was to include as diverse a programme as possible including science, astronomy, sustainability, health and, given its special location, environment, wildlife and the impact of lighting in such a sensitive area.

Another aspiration for the event, was that it should be community based. Whilst the organisers wanted to draw visitors to the town, they felt it must be firmly routed in the community and engage with local people, businesses and have a strong educational component.

Educational input was provided by the Sussex Downs College (SDC) located in the town; head of the Production Arts course Philip Rose embraced the event involving his students as a formal part of their course in all aspects, from design through planning to delivery. He also enlisted the help of his colleagues and the students in the Digital Arts and Photography departments. The festival was also publicised to local schools through STEM (Science, Technology, Engineering and Maths), a network that engages with professionals to encourage children to consider education and careers in these fields. It is hoped that in future STEM events with local schools can also be included. Whilst the community was core, it was essential that what was delivered was of the highest quality. With this in mind, Festenstein was keen to draw on whatever professional resource was available. Keeping the local theme very much in mind, he approached fellow Lewes resident, theatre and opera lighting designer Paul Pyant, and lighting designers Karen Van Creveld and Paul Nulty, both with Lewes connections – all were enthusiastic and keen to support the festival. Paul Nulty also enlisted his co-director Ellie Coombes, who coincidentally grew up in Lewes, to coordinate input from the Nulty team.

The final place was filled by projection artist Alex May; having grown up in Lewes, May returned to the town with one of his pieces Shadows of Light previously shown at the Kinetica Art Show and Tate Modern. An interactive digital artwork, Shadows of Light, explores the concept of ‘slow interaction’: rather than responding to quick movement, it requires viewers to slow down and stand still, it slowly takes the viewer’s silhouette and uses it as a digital stencil, ‘spraying’ paint that starts to drip and spread into the silhouettes of others.

The festival itself was based in the Linklater Pavilion, an eco building that plays a community role as home to the Railway Land Wildlife Trust – a nature reserve at the edge of the town. Within the building was a small exhibition with displays on Dark Skies by the South Downs National Park; work on the impact of artificial light on wildlife by Dr Alan Stewart from Sussex University; sustainable light sources by Sustainables4U; Brighton and Lewes Downs Biosphere – a UNESCO project; photography from the Lewes Camera Club and SDC; and an educational display for younger children by the Herstmonceaux Observatory Science Centre.

The venue was also host to a short programme of speakers who talked on a range of subjects: Paul Nulty on lighting design; Graham Festenstein on lighting as part of sustainable urban design; Dan Oakley from the South Downs National Park on dark skies; and Dr Richard Hobday on light and health. The discussions were chaired by Professor Emeritus Peter Mobbs, former Dean of Life Sciences and neuroscience researcher at UCL.

There were fourteen installations around Lewes itself, with buildings and spaces lit by conventional architectural schemes, torches, or digital projection. Visitors could navigate these by joining a guided walk or by themselves using a map of the route. At the end of the night they could reflect on the evening while enjoying the final installation to an atmospheric soundtrack prepared for the event by Starfish, a local youth music project.

The entire event was delivered on a shoestring budget with limited funding and many of the resources delivered by the organisers and designers. Significant support came from within the industry, as the event was affiliated with, and supported by, The Institution of Lighting Professionals; The Society of Light and Lighting; the International Association of Lighting Designers; and IYOL 2015. Equipment was provided by Commercial Lighting; Meyer; iGuzzini; Light Projects; Architainment; Malham Lighting; SORAA and Osram with additional support provided by Russell Beck Studio and Creative Light and Power.

The organisers were said to be delighted with the final result and feel the first year’s event demonstrated the tremendous potential the festival offers the town; successfully combining community participation with high quality artwork and design, providing something for everyone – residents and visitors alike and across all ages.