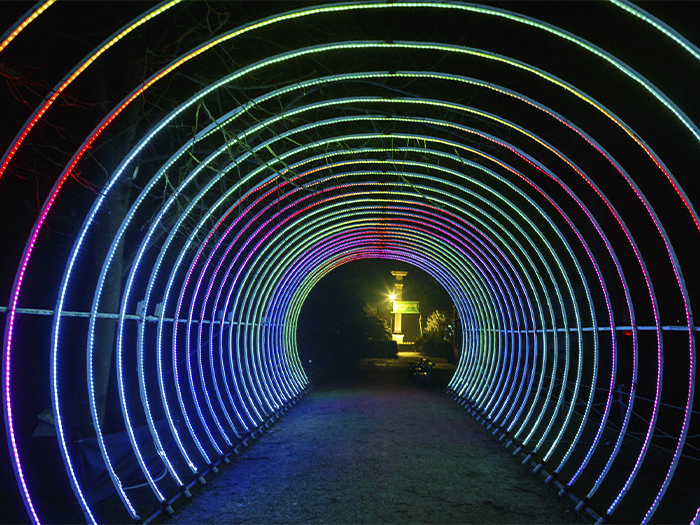 (UK) – Socially distanced version of the festival to run from 20 November to 3 January 2021.

After making its European debut in Manchester last year, Lightopia will return to Heaton Park with its lantern and light festival this winter.

The festival showcases interactive and immersive lights, lanterns and installations, with an illuminated trail that has this year been designed to maintain social distance from others.

New themes for this year’s event include a Christmas showcase, which will use the Grade I-listed Heaton Hall as its backdrop, and the Astronomy display, in which the night sky will be illuminated with a beautiful moon installation. Other pieces will include robotic controlled pads on the floor, which will create light shows when stepped on, and an interactive Zodiac Sign installation. There will also be an area dedicated to the Manchester Skyline, and an immersive Musical City, encouraging visitors to dance their way through the lights.

Last year’s popular Animals attraction will return, while other installations from the 2019 edition can be re-visited in the Discovery space.

The Lakeside water show will also play a key role in the exhibition, as a state-of-the-art projection will create a visual masterpiece, bringing the story of Lightopia to life with a new production created for 2020 that reflects the festival’s themes of discovery.

Ian Xiang, Creative Director of Lightopia, said: “We are excited to bring Lightopia back to Manchester, and have once again created a world in which light, sculpture and art combine with traditional Chinese lantern-making techniques to create an immersive experience, full of light and stories.

“We want our guests to become part of the Lightopia story, helping to create new forms of art as they interact and engage with the luminescent sculptures that trail through Heaton Park.”

Lightopia will run from Friday 20 November until Sunday 3 January 2021.