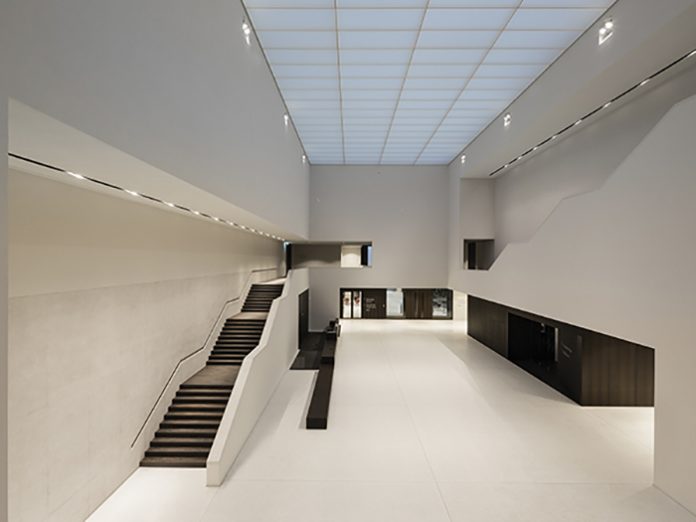 Extended by Staab Architekten through a new construction connected with the existing building from 1908, the LWL Museum for Art and Culture in Münster, re-opened in September 2014 – now displaying its collection in 51 exhibition spaces – is flanked by a library, auditorium, access and relaxation zones, as well as a bookshop and restaurant.

The carefully structured lighting concept by Licht Kunst Licht (LKL) offers flexible exhibition illumination, while orchestrating the architecture. Light is integrated into the architecture and new visions of an interconnection between the museum and its neighbourhood open up from within. Regardless of the perspective – inside or out – openness and clarity undeniably prevail in this building, with the lighting concept underlining these qualities. Consequently, LKL opted for a stringent integration of all light sources, with the light effect at the focus of the design. Entering through the new extension, visitors are welcomed by a three-storey foyer spanned by a glazed skylight and a membrane ceiling below – creating an interesting play of light and shadow that shapes the space.

In order not to encumber the ceiling surface’s visual effect, the foyer illumination has been fully integrated into hidden wall recesses throughout. For the adjacent courtyard, ERCO downlights have been integrated into the vertical façade surfaces, illuminating the patio and orchestrating the sculptures and objects on display. The light sources remain concealed as visitors pass the staircase connecting the foyer and exhibition spaces on the second and third floor. Nevertheless, the sculptural character of the staircase is emphasised by light emanating from the linear ceiling recess – appearing as a dark groove from below.

Moving through to the new exhibition spaces, a unique lighting solution has been specifically developed. A ceiling integrated artificial lighting frame creates a calm ceiling impression and provides flexible light. The light frame creates a particularly homogenous illumination of the wall surfaces, achieved through a precise arrangement of dimmable fluorescent lamps behind the translucent membrane.

Artificial light frames and projectors work to form a versatile duet in the exhibition space. Following the groove between the lighting frame and the central ceiling area is an ERCO track, which allows for the flexible adaptation of Gallery LED cc spotlights from Eigenart Leuchten. Moving up through the building, artificial and natural light is carefully matched through the use of five skylight spaces. Large, centred daylight ceilings allow the dynamics of natural light into the interior space, but in order to avoid the detrimental effects of direct sunlight, a laminated glass sandwich has been fitted with a micro-prismatic layer. The amount of light can be further reduced through a roller blind, while another layer allows for a complete blackout, and a translucent membrane ceiling facing the interior acts as an additional filter. In order to achieve artificial light identical to that of the other exhibition areas, a combination of the aforementioned light frame and track-mounted spotlights has been implemented. The luminous flux emitted by the ceiling integrated light frames is automatically dimmed by a daylight harvest control, with the data required for this provided by a daylight sensor on the museum roof. Moving through to the historical building, a filagree lighting profile has been implemented so the visual disruption of the listed arcade space is not interrupted. In spite of its small cross section the profile accommodates three lighting functions – fluorescent lamps for the indirect component precisely illuminate the vaults above the transverse arches while the profile’s lower section contains LED miniature projectors.

For the central staircase, decorative pendant luminaires are suspended from vault apexes, while the uppermost floor of the staircase has been fitted with additional direct illumination by ERCO Quintessence downlights. The library has abundant daylight intake through the patio, but the high mobile library shelves require good vertical illumination of the book spines. Two Selux pendant luminaires have been suspended, while vertical displays are highlighted by flush recessed downlights. For the ground floor access areas and recreational zones, flush ceiling recessed downlights have been implemented to create directional light as well as a calm light atmosphere, while for the auditorium flush recessed ERCO LED and HIT downlights create resonant light and dimmable LED luminaires create an atmospheric ambience.

Moving outside, wall recesses in the new building’s façade have been fitted with wall washers in order to illuminate the facing historical building homogenously and softly. The public square on the new building’s opposite side is orchestrated by various lighting elements, along with recessed orientation Bega step lights. The focal point of the museum’s exterior façade illumination however, is Otto Piene’s refurbished light sculpture Silberne Frequenz, integrated carefully into the exterior lighting concept. With the museum’s cultural artifacts reflected in the building’s historical architecture, LWL Museum is a well-orchestrated hub of anthropological significance. LKL’s detailed lighting scheme intuitively guides visitors through 1,000 years of Western art and culture in this defining reconstruction.