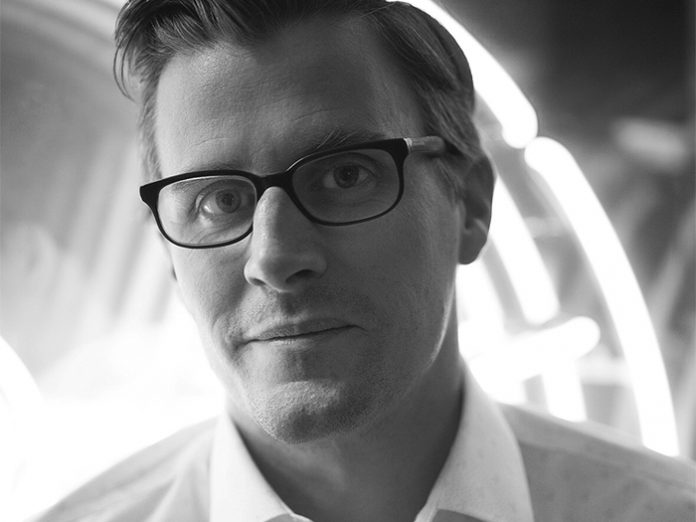 Following the announcement of the recent merger between PointOfView and Firefly Lighting Design, to become Firefly Point Of View (FPOV), arc sat down with Mark Elliott, Global Creative Director, to discuss the merger, and the growing standing of lighting design in Australia.

I think, like many others did 20+ years ago, by accident. I studied as a furniture designer; and worked in that field for a short time, but then saw a job as a junior lighting designer for Lumino Lighting. From there my passion for architecture was reinvigorated and it was the launchpad for me to collaborate with architects and designers I would probably never have been able to work for in their fields as an architect or interior designer. From Lumino I moved to work with Barrie Wilde at BDP. Barry was one of the pioneers of lighting design in the UK and it was great to work with someone like that early in my career. From BDP I joined Isometrix and Arnold Chan’s team there. This experience really sculpted my career and exposed me to the very best in architecture and design, collaborating with global leaders and Pritzker Prize winners. Following a move to Sydney in 2005, I joined another pioneer of lighting design, Andre Tammes and LDP, working on a number of large hospitality projects in India and China, which then took me to my current role at PointOfView, (now FPOV) where we grew the studio from four people to a team of 40+ across eight offices today.

You left Isometrix to move to Australia. What were the reasons for the move?

Like many people early in their careers, I was looking for new challenges, mostly personal. I was very happy with my role at Isometrix and in fact discussed with Arnold the possibility of continuing my role in Australia. At the time Australia wasn’t really on the world stage for architecture and design, so it didn’t make sense; but the lure of sunshine and an easy way of life was too strong. Little did I know that “work hard play hard” was invented by the Australians, and specifically Sydneysiders, where the working environment is very demanding.

How does lighting design differ in Australia compared to the UK?

It’s a much smaller industry in Australia, which means competition is much stronger between those at the top. We have been very lucky to be prominent in Australia at the time where Asian investment has driven the quality of design and demands of clients to a higher level. Over the last decade I would say that design is on a par with the rest of the world and we see global design leaders like Foster + Partners, MAKE, Jean Nouvel, Frank Gehry, etc, working in Australia. This then lifts the practices of all other consultants and in response a knock-on effect for all clients to push harder for innovation and excellence to stand above their competitors. The Australian market, I believe, is a leader in sustainable design, implementing the ban on the GLS earlier than many other parts of the world, which led to the early adoption of LEDs project-wide. In fact I think that The Collins Bar in Adelaide in 2013 was the first full LED project we completed, where we implemented very early warm dim technology from acdc. That was a game changer for me, where we could get back to the warm, night time hospitality environment that was lost when halogen was no longer usable.

We spoke to you twelve years ago, just as you moved to Australia. How has lighting design developed there since you arrived?

Twelve years ago I felt that the industry was a long way behind. I think the investment from Asia, together with the advances in technology meant that the demand for specialists has grown to deliver environments to meet client expectations and code requirements.

Today, Australia is up there with the best, delivering projects around the world, with global clients and collaborators. FPOV is testament to that, where we now have studios in Hong Kong and London, working on all continents (apart from Antarctica!).

And how has PointOfView expanded in that time?

I joined POV in 2005, at that time there were four of us in Sydney. We have grown with the industry and, hopefully, through the quality of our work. In 2010 we took ownership over from David Becker, POV’s founder, and have been growing organically ever since. I always judge myself on the projects we currently work on rather than our past, always striving for better results and more prestigious projects. We also merged with Tony Dowthwaite Lighting Design in the Gold Coast, Tony is the third in my list of lighting design pioneers, I believe TDLD was the first independent lighting design consultancy in Australia.

How did the merger with Firefly Lighting Design come about?

POV was looking to grow internationally, many of our hospitality clients in Asia enjoyed working with us but needed a local presence; and Firefly were looking to be part of a larger team to have more capacity to service clients. John Lau, Director of Firefly and I worked together at Isometrix, Peter Veale, Co-Director at Firefly, also worked at Isometrix, before my time.  So, we knew each other, the way we worked, and our design philosophies were attuned, so a merger would form a true partnership and extension for both studios.It’s a continuation of our organic growth, an expansion of clients, market knowledge, global abilities, sharing of resources and an expansion and growth of expertise and experience, all with a view to deliver better and more innovative results for our clients.

You’ve also recently moved back to the UK. What were the reasons behind the move?

As part of the merger my role became a global one, to be the glue between each office to ensure the sharing of ideas, experience and consistency of delivery and creativity. To ensure that we all really benefit from the ‘global studio’ ideal and to ensure we don’t all work in silos, which would defeat the purpose.

Finally, what can we expect to see from FPOV in the near future?

I believe we are working on the world’s leading and most aspirational hospitality project in Crown Resort Barrangaroo, a $2.2billion project, with a global design team including Wilkinson Eyre, Meyer Davis and Bates Smart. Also in the works, Resorts World Manila, the $1billion Castle Towers Shopping Centre with Woods Bagot and UNStudio, the soon to be completed Jumeirah Sadiyaat Island Resort and the landscape and urban environment of the recently opened Jean Nouvel National Museum of Qatar. Beyond that, bigger and better things…