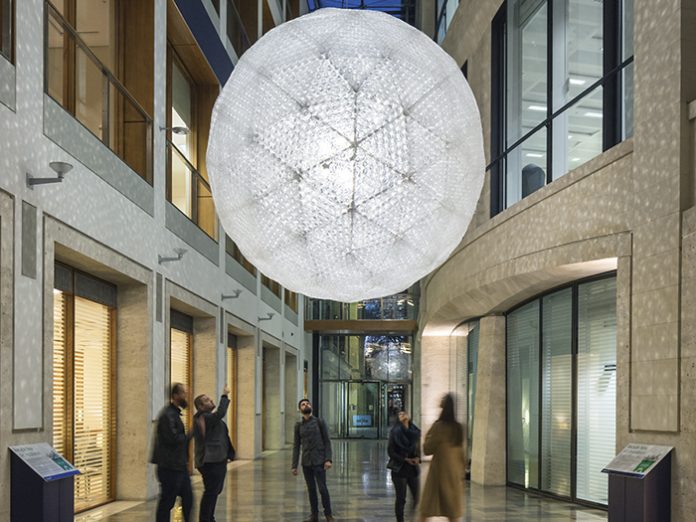 Commissioned for Earth Day by Bank of America Merrill Lynch and Create London, MyCup is a light installation that educates and inspires employees to recycle at work.

Lighting technology has undergone a disruptive change since the introduction of LEDs. The desire for energy efficient lighting is putting more pressure on making LEDs ever-present in buildings and around cities.

This has led to the idea of smart lighting, which lies at the convergence between an internet of things and LED technology. By connecting lighting using the protocols and languages of the web, an internet of light can be created. As light is everywhere, it can be used as an infrastructure to unlock hyperlocal services inside and outside buildings. For instance, it can distribute sensors and communication devices inside buildings and around a city. By coupling microcontrollers and proximity-based connectivity and communication, light sources can become aware of themselves and their surroundings, with which they can interact and develop an emerging behaviour. This would allow the creation of buildings where lighting systems adapt parameters to keep a state of visual equilibrium with the environment and occupants.

Arup and Xicato recently put this thinking into action in a lighting installation called MyCup. The project was in the form of an interactive light sculpture, installed at the Bank of America Merrill Lynch London corporate headquarters at No.2 King Edward Street.

Designed and installed by a collaborative team formed by Create London, William Bondin, Francois Mangion and Ruairi Glynn from the Interactive Architecture Lab at University College London’s Bartlett School of Architecture and Francesco Anselmo from Arup, it was launched for World Earth Day in April 2015 as part of an initiative to stimulate reflection about the planet’s personal and collective waste streams.

Waste generation is usually discussed on mass but MyCup brought awareness to individuals, using plastic cups as a marker. On average, a person discards four plastic cups a day in an office environment, equalling over 8,000 cups in a decade. In light of this statistic, 8,000 cups were used in the suspended six-metre diameter globe. During its six week installation, Merrill Lynch pledged to use 8,000 less cups as part of the bank’s commitment to environmental sustainability.

The lighting core at the centre of the geodesic structure illuminated the surrounding space through the filtering layer of the translucent outer envelope created by the plastic cups. The positioning of the LEDs revealed the inner structure and the surrounding space through the glowing skin of the sphere, using a multiplicity of dynamic lighting behaviours.

The lighting core included 40 Xicato XIM modules, 1-10V version, 4,000K, controlled with 0-10V DMX dimmers. Arup developed a 3D interactive web-based interface for visitors that allowed anyone to play with the lit sculpture through an ad-hoc Wi-Fi connection. In this way, the richness of visual sensations offered by the interplay of light, darkness and reflections, both inside the sphere and in the surrounding environment, can be created by the visitors who have a direct role in shaping the sculpture’s lit behaviour.

The afterlife of the installation was also an important factor in the design and so the cups were used in workshops with local school children in discussions about waste and in building their own artworks. For example, the structure was used at the Bartlett School of Architecture on the reEarth project and the lighting will be incorporated into ongoing research at UCL.