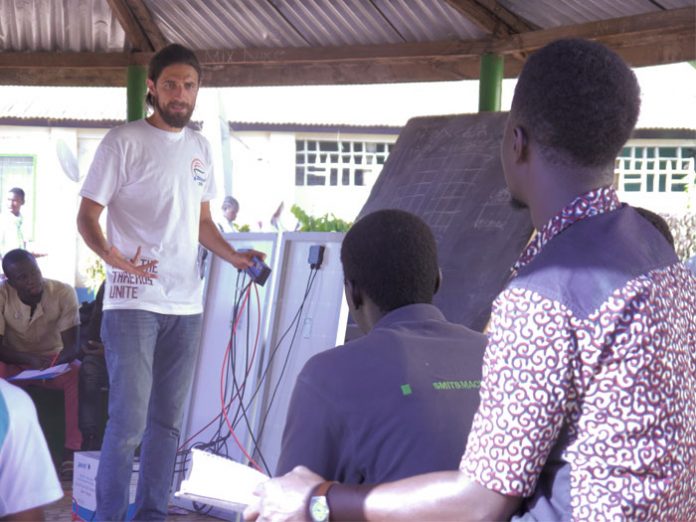 Lighting designer, artist and Dark Source founder Kerem Asfuroglu tells us about his recent trip to Gambia for a charity venture, in collaboration with The Vessel UK and Daughters of Africa.

Long-time readers of arc will already be well aware of the work of Kerem Asfuroglu, as the lighting designer and artist regularly graces the pages of this magazine with his hard hitting Dark Source stories.

Since the turn of the year, the Hochschule Wismar graduate has founded his own independent lighting design and visual arts studio, Dark Source, following his departure from Speirs + Major – where he worked for almost eight years – in October of last year.

Passionately driven by its “social conscience and creative vision”, Asfuroglu’s aims for Dark Source are to work collaboratively to add value to public, architecture and design projects of various scales, with social-impact and community projects ranking very high on the studio’s agenda.

As part of this agenda, Asfuroglu recently teamed up with the Daughters of Africa Foundation and The Vessel UK for a charity project in Gambia, focused on training 30 local electricians about lighting design and solar energy to increase their employment potential, while also providing a new source of light for their local community. More than just another lighting design project, The Vessel is an innovative approach to target projects around the world to promote the universality and importance of lighting design.

The project came out of Asfuroglu’s charity work closer to home, as he explained: “In 2014, I volunteered at KORI, a community centre in North London that was focused on youth development.

“The community centre was founded and managed by a wonderful lady called Odiri Ighamre, who taught me a lot about youth-mentoring. The Vessel was a product of KORI that focused on empowering people to deliver projects in Africa through teamwork and sharing knowledge. They worked in various African countries before, but Gambia proved to be one of their most consistent partners.

“We always talked about doing something, but I never got around to it due to my professional commitments. When I left my job towards the end of 2018, I finally ran out of excuses.”

Electricity is an unreliable and very expensive resource in Gambia; apart from the main highways, the majority of the streets do not have any lighting. On top of this, approximately 600 million people in Africa cannot access or afford electricity, which forces people to consider oil-based lamps or candles for illumination, which can cause issues such as air pollution, fire, smoke poisoning and bad sight. The aim for The Vessel, therefore, was to demonstrate how designed light could improve lives – not only by replacing the incendiary illuminants, but also by offering an alternative to their blatantly utilitarian successors.

Following technical training at St. Peter’s High School in Lamin, the project was finalised with the practical installation of a solar power-based lighting scheme at a 24/7 accessible community library. “Alagie Ndow, the most charitable young man, offered the Inspiring Young Stars Library, which he set up to serve his community in Abuko,” said Asfurloglu.

“Our mission was to deliver a holistic training, which involved design concept, project management, site-work and even preparing portfolios for getting new jobs.”

Due to the lack of electricity and economic circumstances, some children travel up to six kilometres to attend the library, so Asfuroglu and The Vessel wanted to improve their studying experience through lighting design, while eliminating the power cuts and costs indefinitely.

The new design for the library consisted of multiple layers of light, with custom-designed pendant luminaires providing task lighting, spotlights for creating vertical emphasis and bespoke lanterns for flexibility.

A local artist produced the hand-woven pendant shades, as Asfuroglu explained: “All we did was identify that we needed pendants as a functional layer of light. It was important that the design felt local to create a sense of character familiar to the surrounding context and its users.

“We got in touch with a local artist named Tijan and coordinated the process through WhatsApp until we met in person. We only gave him a guideline idea about the scale and transmission, the rest is his magic. We are delighted that we can take no credit on that front.”

The spotlights focused on the walls revealed the colour and texture of the books, while creating a legible and well-lit space. Old-school kerosene lanterns found in second-hand shops were retrofitted with LED lamps. The transportable nature of these lanterns provided flexibility as they could be relocated based on need; for instance, two of these were hung outside the entrance to signal that the library is open, with a warm welcome.

Due to the very tight budget for the project, Asfuroglu said that they had “no funds for fancy equipment”. “It is a real eye opener,” he said. “It makes you appreciate the kit that you normally get to use over in this part of the world.

“We allocated more funds for the lamps to ensure a certain level of quality and longevity. We also brought enough spares to minimise the maintenance costs for the community.”

As well as the quality of light, mounting standards played an important role on the luminaire selection criteria. “Whether it is B22 or GU10, it was important to ensure that the right products can be found in the local market. Therefore all selected luminaires had to utilise interchangeable lamps for future-proofing.”

Asfuroglu also added that, owing to the difficulty in sourcing specific materials in Gambia, as the majority of electrical equipment is outsourced, most of the materials used – such as the solar panels, light fittings and cabling – had to be brought in from abroad.

However, he revealed that the overall equipment cost was less than £1,000 – and was completely financed through fundraising. The new scheme also provides a solar system capable of storing up to 1.2KW per day. “With five hours charge, the system provided more than eight hours of illumination, and enough additional power for other applications.”

The newly illuminated library features a complete 2700K LED scheme, something that is uncommon for Africa. “Due to the efficiency concerns, manufacturers don’t tend to provide LED lights in warmer colours,” Asfuroglu explained. “The popularity of the scheme busts the myth that warmer climates always opt for cool colour temperatures.”

Indeed, Asfuroglu said that he was “over the moon” to see how much the local community embraced and valued the scheme, particularly when considering the lasting social impact that the project will have on the area.

“Our biggest design question was ‘what will be left for the community once the project is over?’” he said. “Its social impact was meant to create sustainability and growth through training, evoking business ideas, connecting communities and improving social circumstances. As much as delivering a design project, it’s also about teaching how to sustain and spread the culture of design.

“True self-sufficiency relies on the knowledge to be sustainable, as well as the energy. Rather than importing a design, the project focused on local culture, issues and experience to generate its own workforce through sharing knowledge.

“I heard that one of our trainees, Pabi, wants to design lighting for his neighbourhood now. He’s trying to get households to join together and contribute. We cannot think of any better outcome than this.”

Having spent a month in Gambia for The Vessel project, Asfuroglu described his time there as “a profound experience”.

“Within the massive African continent, Gambia is a tiny country that is full of life and ambition,” he said. “The growing economy has not yet reached its full potential, therefore it is difficult for people to sustain themselves with a single job. This is why the lighting design course was timely for our 30 young electrician friends, helping them to broaden their approach and seek other opportunities.”

On his return to the UK, Asfuroglu has said that he is already looking for the next venture to get involved with, whether that be in Gambia, or elsewhere in Africa. He said: “Social impact and community projects rank very high in Dark Source’s agenda. We’d be happy to see ourselves going back soon, but it would need to be with the right people, and the right time.

“Charity projects demand considerable amounts of time and resources, therefore the coordinating partners play a very important role on bringing the project to life. With that said, we want to give a big shout out to The Vessel UK and Daughters of Africa. They have done an amazing job with coordinating the project and accommodating us. It would not have been the same without their personal care and involvement.”

And he has encouraged more lighting designers to get involved in initiatives such as these. “The Vessel was a design project that sought success in social impact, not excellence in visual aesthetic. It’s part of a movement that encourages lighting designers to take social responsibility in parts of the world where their skills may not be profitable, but certainly life changing.

“If you want to get involved, you should first scout for like-minded organisations and project managers who operate in the area of interest and consult them. Start a conversation. Think of what you can offer and make sure that it has deeper roots than just a two-dimensional lighting project. We would be happy to share our experience and point people in the right direction if we can, so feel free to give us a shout!”

Looking back on his time in Africa, while he feels that the whole experience was incredibly rewarding, there was one moment that stands out as a highlight.

“On our last working night, seeing the children comfortably study under the new light was our biggest reward,” he said. “Lots of parents showed up asking about the place, because the new lighting got their attention.

“As we stepped outside, we noticed that the power had gone out in town again, but the best part was that the children at the library did not even notice. This is how imminent design enhanced the quality of life.

“This project has been a profound experience for everyone who has taken part in it. As designers, we rarely get opportunities to improve lives in such an essential and straightforward way. We are forever in debt to our donors. This project would not have touched so many lives without their kindness.”

Following his return to the UK, Asfuroglu has received a great deal of recognition for his work in Gambia, notably receiving a special mention at the Lamp Awards. Noted as a “commendable piece of charity and social work…concerned with making a long lasting, sustainable difference within the community” by the judges, Asfuroglu received a donation of €1,000 in lighting material for Dark Source’s next social light project.