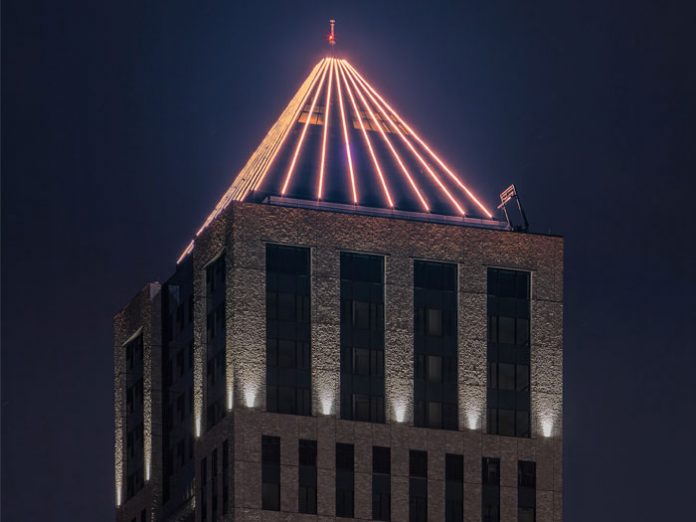 Located in the heart of Istanbul, Turkey, Nurol Life is a new complex housing 501 residences and 50 offices. Completed in 2018, the building stands at 220 metres high, and is nestled in between the city centre and the Belgrad Forest.

Due to its proximity to the luxurious elements, coupled with its sleek look and minimalist design approach, Nurol Life is centred on the concept of ‘Practical Luxury’, with the aim to make life feel easier for its occupants.

Designed by Hakan Kiran Architecture, with interior design from Autoban, the lighting design for the complex was created by ZKLD Light Design Studio. The main idea for the lighting design was to complement the ‘Practical Luxury’ concept, creating a cosy and pleasant ambiance that makes people feel welcome on a human scale, while adding to its eye-catching architectural design, highlighting its iconic look on wider the city scale.

Because of the tower’s height and location, the façade was integral to ZKLD’s lighting design right from the start, as Mustafa Akkaya, lighting designer at the firm, explained: “At the beginning of the project, a mutual exchange of ideas was made with the client and the architectural team.

“During the next phases, we put forward possibilities of light that could emphasise the structure, and new ideas came in from there. The collaboration of ideas put a great emphasis on the lighting scheme during the whole process.”

The façade lighting for Nurol Life was broken down into three separate parts: the first, the base of the tower, related to the common areas and offices on the lower floors, and how the building is perceived from street level. The second part relates to the residential properties in the main body of the tower, while the final part relates to the ‘Pyramid Lounge’, situated at the building’s peak, and the pyramid form that can easily be perceived in the wider city scale.

At the base of the building, the lighting designed by ZKLD illuminates the entrances with mid-power uplights in a move to try and keep the building looking “calm and elegant”.

To accentuate the silhouette of the building, while retaining a minimalist appearance, the main body of the tower is lit from the corners. This illumination was achieved through the use of very narrow, 5-degree Philips Color Kinetics LED projectors at 3000K that were placed at the bottom corners of the tower.

The other application for façade illumination created by ZKLD was to highlight the surfaces of the balcony sidewalls with Assan line Power Plus graze lighting fixtures recessed on the floor of the balconies.

“It was a great challenge to graze the surfaces homogenously whilst preventing light spill going through the windows of other residences,” said Akkaya. “Several mock-ups, where we played with the lenses of 3000K linear power LED fixtures, had to be done to obtain the desired result.”

The tower-topping Pyramid Lounge is the most attractive part of the project, not just for the building inhabitants, but also in highlighting the building amongst the city’s skyline – and it is particularly notable for its geometric shape. To highlight this geometry, and give the building an iconic status within the city, lines of light, underline the shape of the pyramid. However, while these light lines give a message to the wider city, it was important for the reflected lights and visible fixtures not to disturb inhabitants who spend time inside the pyramid.

To make this a reality, a special profile was designed between two glass panels to conceal linear lighting fixtures. With the Philips Colour Kinetics RGBW, pixel-controlled LED fixtures, the designers are able to create special lighting scenarios for special events and national holidays, while retaining a sleek, minimalist look throughout the majority of the year.

This minimalist approach is something that was very important to ZKLD, as Akkaya explained: “Light is an instrument that brings a dramatic effect to a space, but it has to fit with the natural aesthetic of the building.

“We aimed to keep this drama elegant and minimal, by illuminating the building modestly from the inner side balconies, and the iconic geometric shape on the roof.”

Alongside the façade illumination, ZKLD created a lighting scheme for the surrounding landscape, extending the simple, relaxed aesthetic, while adding to the cosy atmosphere that the designers wished to create for residents.

This landscape lighting is blended with the tower, and constitutes the front of the building, a courtyard in the middle of the office space, a pool terrace and the rooftop. For each of these areas, a colour temperature of 3000K was chosen to complement the façade lighting, while creating a series of cosy and serene ambiances.

As part of this landscape lighting scheme, Heper Vesta S and Norma luminaires were used to highlight the road and pedestrian paths, while Faro Shadow LEDs created effect lighting on the grass.

For the main entrance of the building, the aim of the lighting design was to create a highlighted entrance, without any distortion on the visual perception of the interior. Keeping illuminance below eye level was the essential idea of this area’s lighting concept; therefore short bollards with double-sided light distribution were used.

The courtyard, with its small water feature at the centre, is an important breathing space not only for office employees, but the inhabitants as a whole, due to its location. To create a ground-level illuminance, so as not to disturb the office employees while they are working, floorwashers and spike spotlights were chosen to create the desired level of ambiance.

Another spectacular part of this project is the pool terrace: in this area, repetitive linear forms within the architecture served as a starting point for the lighting concept, while Vibia’s Meridiano Series creates warm, cosy and light-shadow effects on the surfaces, as Akkaya explained: “The rhythmic light beams are constituted to create a dramatic atmosphere. The wall sconces that have 360-degree linear light effects are also used to boost light and shadow, underlining the linear form of the architecture.”

At the rooftop, as with the rest of the project, cosiness and simplicity were the main factors in the lighting concept. The use of both up and downlighting fixtures with different light distributions were used for the pathway lighting; as the wider beam helps to illuminate the canopy, narrow beam fixtures help to create a dramatic atmosphere with rhythmically lit pillars to guide people through the pathway.L&L Luce&Light’s Step 6.2 floor-recessed luminaires were used to create this rhythmic effect across the terrace level.

Apart from these up and downlighting fixtures, all luminaires are kept below eye-level: illumination in other parts of the rooftop includes one-sided floorwashers at the side of the walkways, while a diffuse light emanates from the vegetation lighting. Special bollards, again fitted with 360-degree light effects, are used to continue the light and shadow motif present in the pool terrace, therefore keeping the whole lighting design integrated within the architectural language of the landscape.

Such integration was essential for placing Nurol Life into the fabric of the city as a whole – a key facet of the initial concept. “Lighting elements were mainly chosen in accordance with the conceptual idea,” Akkaya said. “Nurol Life is a structure in the centre of a metropolitan city, therefore we needed to keep in mind that it will be affected by its surroundings all the time.

“For this reason, we were very careful with the surrounding buildings and as such we differentiated lighting levels according to the needs of each space. On the different layers of the building, such as the balconies, indirect lights were chosen to avoid visual discomfort during the design development process.”

Akkaya added that ZKLD’s close relationship with the architects, developed from previous projects, helped to make the whole process as streamlined as possible.

“In every project, the essential point is the conceptual idea: there are different ideas inspired by each project, its people and its surroundings. For Nurol Life, we aimed to enhance the architectural details by using the power of light.

“Lighting design played an important role in reflecting the ideas of the project, and seeing this minimalist and elegant touch in the silhouette of Istanbul is a great feeling. Alongside this, Nurol Life has a unique place as its own reflection in the heart of the city.”