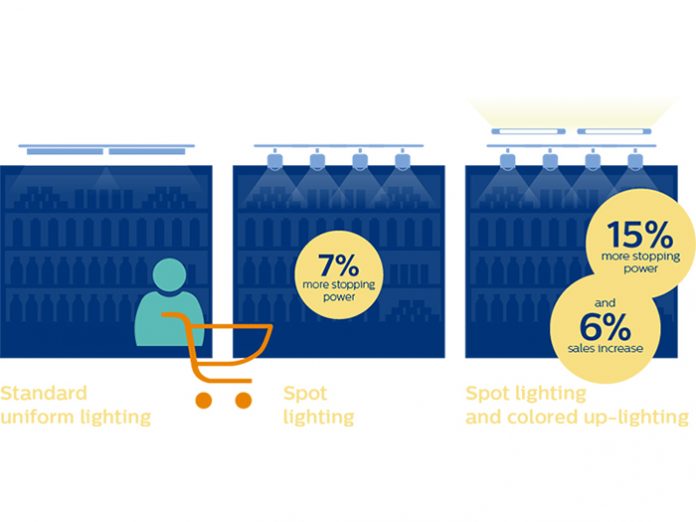 Philips Lighting and Globus, a major grocery retailer in Germany, have measured the positive effects of lighting in a joint research project. In collaboration with German Research Center for Artificial Intelligence DFKI and EIT Digital, a series of experiments were conducted at the Globus supermarket in Saarbrücken to study the impact of different combinations of coloured lighting on sales and customer behaviour. The results showed that using coloured uplights together with Philips StoreWise lighting system helped increase sales while enabling energy savings of up to 75% compared to conventional lighting.

The study showed that the most effective setting for enticing shoppers was using spotlights with pastel coloured uplights that led to a 6% increase in sales of goods from the promotional area. The same combination of coloured lights created the best stopping power for the promotional area and increased customer visits by 15%, compared to the standard store lighting. When conventional lighting was replaced by spotlights alone, 7% more customer visits occurred.

‘‘Adding soft pastel colours to highlight products is a potential game-changer for the retail industry. For the first time research has shown that different lighting conditions can affect shopper behaviour and drive increased store revenues,’’ said Gonneke Gros, Segment Lead Food and Large Retail, Philips Lighting. ‘‘With new lighting systems like Philips StoreWise and Philips’ indoor positioning system, we anticipate retailers to analyse sales and traffic data within their store in real-time and adjust the lighting conditions to optimise sales.

Retailers have traditionally lit stores using uniform, white, overhead lighting. The research showed that the 58 spotlights used in the experiment strengthened the appearance of products by increasing contrast. Adding coloured uplighting (aimed at the ceiling) as well, helped differentiate the promotional zone and make it more visible from far away.

Norbert Scheller, Store Manager at Globus supermarket in Saarbrücken commented: ‘‘As a retailer, to stay ahead of the competition, you have to create a multi-sensory environment and a ‘wow-factor’ in your stores. Working with Philips Lighting has helped us realise the immense potential lighting can have and we have successfully been able to create triggers to direct our customers to promotional areas in our store and to inspire them in new ways.’’