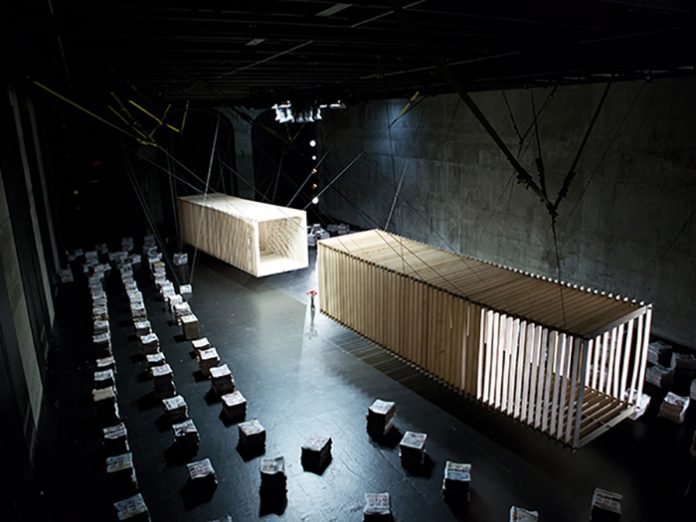 Using Shakespeare’s King Lear as inspiration, Requiems King Lear is a theatrical festival by Hanna Abd El Nour, which visited Espace Libre in Montreal. The project used an old barracks converted into a theatre as the setting for Nour’s contemporary project, creating a dramatic space for the actors and spectators. Making use of a 360° theatre, the idea was to create an installation modelled on the City of Quebec.

The immersive design by Nour and ephemeral architecture by Mazen Chamseddine was inspired by King Lear and his fate – when, overnight, he is stripped of his power and status and left homeless to become a nobody, living in a nowhere place and attached to nothing. It is also inspired by the origins of Quebec society and the performance of the actors; with the two inspirations driving and sustaining one another. The set becomes a space-time realm to be inhabited by visitors, made up of three worlds intermingled in the scenography created in situ. The three elements that define the space include: an immense wooden structure, numerous stacks of newspaper and a concrete block. All three elements came into conflict with the light and music to create a marketplace in which the ideas of the actors and the audience were expressed.

The striking theatre featured raw concrete walls, deliberately left exposed to form part of the scenographic landscape. Contrasting with the stark brutality of these walls, the wooden structure divided the room diagonally, offering a degree of transparency, giving the impression of an opening or a passage to an imaginary world.

Suspended in the centre of the room, the wooden structure immediately becomes both the contents and the container, providing a walkway through the large empty rectangle of the theatre. As if floating in the air, the structure represented a nowhere land, an inhospitable place that is perilous to traverse. Consisting of two mirror-image sculptures separated by a void, the structure gives the impression of a black hole which becomes the centre of the universe, extending to infinity.

The 175 stacks of newspaper reporting the city’s news populate the space, which transformed into a labyrinth to walk around. In reference to the newspaper stacks, Nour commented: “They serve both to create King Lear’s barren heath and to provide seating for the audience.” The stacks were arranged in the room along a Cartesian urban grid, traversed by two storms, transforming the configuration by creating one centre at either end of the room. As a consequence of this arrangement, the boundaries between the spectators and actors was deliberately blurred, especially as spectators were given a shot of vodka at the start of the performance. A concrete block with the same dimensions as the newspaper stacks, acting as a counterweight to Chamseddine’s wooden structure, was positioned facing the wall of the room

The steel wires used to suspend the installation heighten the feeling of insecurity and fragility, creating a poetic image and evoking the strings of destiny – the ties between humans and the social hygiene of the city.

At first, the approach to lighting for Requiems King Lear was that of darkness, but when faced with the empty space, lighting was used to create volume. Lighting designer Martin Sirois used light for its architectural features, aside from its function to illuminate or show. Sirois’ idea was to structure the dark around the architecture designed by Chamseddine. His concept looked to suggest that light was living free before meeting the materials filling the space. The darkness was therefore cut surgically, suggesting a space outside of the visitor’s body and time.

In reference to the introduction of lighting to the project, Sirois said: “Working with Hanna Abd El Nour and filling the space for the first time, is why we directed the concept towards the stars and astronomy.” In each of the four corners of the theatre, Espace Libre spirals were installed – each with a distinct centre. This created a symbol of a black hole or the wheel of fortune. In the centre of the spiral, a projector directed towards the centre of the space and structures reflected the feeling of emptiness within the visitor, a dark framed space, evoking the fear of the unknown.

In the centre of the theatre nine moons, symbolise birth, life cycles, fate and destiny, but also the image of death and travel. Commenting on his inspiration, Director Nour said: “In the Divine Comedy, Dante rises through nine heavens, like new spheres revolving around the earth. While Dante rises into the new heavens, King Lear falls to the absolute void of existence. Nothing.” Nour’s Requiems King Lear looked to create the idea of a tenth heaven, consisting of ten projectors placed in a rectangle, like a sky framework that exists in a place further away from our world. Its mission was to replicate the movement of the heavens, controlling our destinies; in contrast, it is with this movement that time arises, which limits all that exists. The sky structure forms the tenth wasteland of King Lear, the the lost paradise, the promised land of the Apocalypse. Finally, the stars, created by 20 strobes directed on the wall of the theatre, looks to remember the death of stars, or the speed of light, as distant and mysterious.

Achieving true immersion through light, space and suggestive experiences, Requiems King Lear is a project that allowed visitors to transcend space and time.