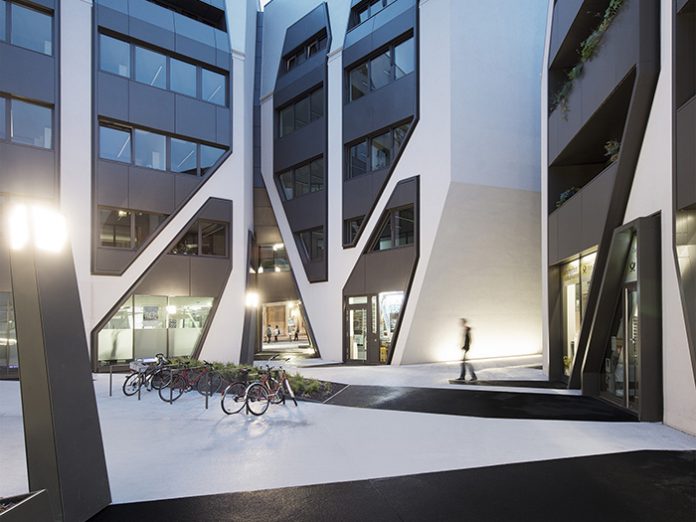 Challenged by J.MAYER.H’s angular design, lichttransfer has created a bespoke lighting scheme that celebrates the contemporary architecture, while creating an inviting communal space for workers, residents and visitors of Sonnenhof’s courtyard.

Sonnenhof consists of four new buildings with office, retail and residential spaces. Located on a consolidated number of smaller lots in the historical centre of Jena, Germany, the separate structures allow for free access through the grounds. Each building has been placed on the outer edges of the plot, defining a small-scale outdoor space congruent with a medieval city structure. “The idea was to fill the huge site in the middle of the historic centre with buildings of about the same size as the ones from the past,’’ explained J.MAYER.H’s Founding Partner Juergen Mayer H. “We didn’t want to build one huge building there, so we decided to create four smaller volumes. The separate structures allow for free access through the grounds,’’ he added.

Its outdoor facilities continue the building’s overall design concept past the edges of the plot. The planned incorporation of commerce, residence, and offices enables a flexible pattern of use that also integrates itself conceptually into the surroundings.

While working with J.MAYER.H Architects (JMH) for the exhibition Level Green at Autostadt Wolfsburg, lighting design practice lichttransfer was asked to support the architects with its scheme for Sonnenhof as well. In particular the exterior lighting with some consultancy for special parts of the interior, such as the staircase, office and lobby lighting, using iGuzzini iN60 light lines in varying lengths.

Katrin Söncksen, founder of lichttransfer commented: “It has been very challenging for us to complete the lighting design for this project because, on the one hand, the outdoor place is a pathway for the public and, on the other hand, it is a kind of private space for the occupants of the buildings. But we have been lucky to work with such a great architect and for a sensitive client. Only this close collaboration made the detailed lighting design and the development of all the custom-made luminaires possible.’’

The design for the exterior lighting seeks to create a warm and welcoming atmosphere. “We wanted to provide an adequate luminance level for security reasons as well as a pleasant and almost private atmosphere for the residents,’’ Söncksen explained.

This atmosphere wasn’t created through the use of regular streetlights as the buildings’ slanted walls made it difficult to place them between the buildings and aesthetically, typical streetlight styles wouldn’t have suited the architectural design. This made it even more important for lichttransfer to analyse the different zones of the outdoor space and to reconsider the various special requirements. As a result of this, the lighting design scheme consists of the following separate components, aiming at creating a consistent impression:

Illumination of the shop windows for a pleasant and light appearance at night (no black glass panels) by linear light lines recessed within the reveal.

Illumination of the entrances by diffuse linear light, recessed in the ceiling.

Illumination of the pathways by diffuse linear light, recessed in the ground.

Illumination of the stairs, ramps and space around the benches by diffuse linear light, recessed in balustrades and benches.

Illumination of the ramp by linear light, recessed in the hand rail.

Starting from the footprint, the design of the light columns is firmly rooted in the architectural design of the buildings and the use of polygonal fields on the ground.

The small courtyard between the four buildings is situated on private ground and could have been inaccessible to the public, but the city of Jena insisted on a public passage, so lichttransfer had to plan according to particular regulations. “We had to provide a certain luminance intensity for the pathway but, at the same time, we aimed at a comfortable atmosphere for the occupants of the buildings,’’ said Söncksen.

The result is a fully integrated lighting concept, fitting perfectly with the architecture of the buildings and the exterior design, no luminaires on the facades, no dark entrances and no dark shop windows at night, no use of a heterogeneous variety of luminaires and no use of luminaires featuring a high luminous spot.

Söncksen continued: “When we started working on this project (summer 2009), LED-lighting was still in it’s infancy. But being aware of the promises and the rapid development of LEDs, we developed light fixtures which would work with both fluorescent lamps and LEDs. In 2012 we decided to switch from fluorescent lamps to LEDs.’’

As a result of the challenging brief, lichttransfer had to develop custom-made luminaires to fit the project’s needs. Using mock-ups, the practice rigourously tested the light sources, refining the design of the luminaires. When switching from fluorescent lamps to LEDs, lichttransfer tested LEDs from several manufacturers before selecting products from Xicato, LED-Linear and Osram to suit the situation.

By switching, the practice was able to reduce the overall input by approximately 30%.

In response to the challenges faced during the project from scheme to completion, Söncksen commented: “Due to the construction of the ground of the courtyard, we had to design the in-ground light lines noticeably smaller than those used in the balustrades and underneath the benches. We would have prefered to use the same width everywhere.’’

Lichttransfer has approached Sonnenhof from an interesting angle, paying close attention to the incorporation of JMH’s angular and abstract architectural scheme into both the internal and external lighting fixtures. The result is an interactive space, highlighted by bespoke luminaires that allow the buildings’ design to flow seamlessly into the project’s external communal areas.