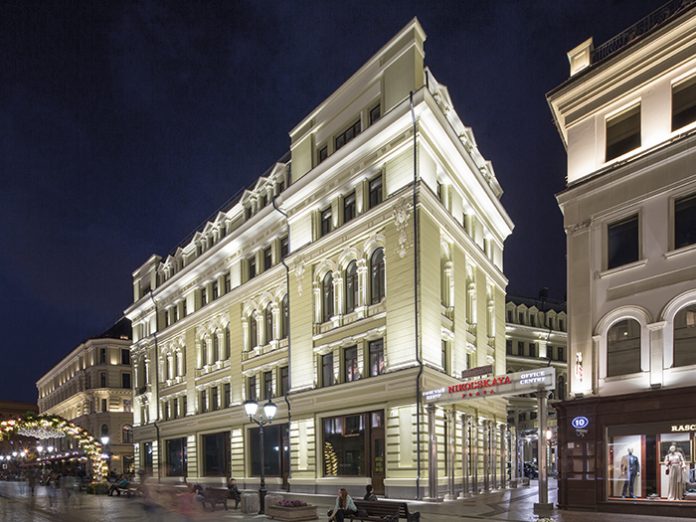 Working in close collaboration with Moscow-based engineering practice Spectrum, BDP has provided a lighting scheme that is respectful to the St. Nickolas building’s Russian heritage, while still endowing it with an impressive presence at night.

A late example of Russian imperial style architecture, St. Nickolas is a unique apartment building built in 1900 and located on Nikolskaya Street – one of the oldest streets in Moscow – a few steps from the Kremlin. The building was purchased by Vesper with the intention to convert it into luxury residential apartments.

International design group BDP has designed a lighting system to accentuate the strong architectural lines of the building as well as highlighting the more subtle baroque and classical details, endowing the prestigious development with an impressive presence at night. This included 130-metres of primary façade lighting, interior public areas and lobbies, circulation routes and stairs.

The project came to BDP through Spectrum, who were the multi-disciplinary engineering practice working on the job. Based in Moscow and looking for a lighting consultant to assist them with their project, BDP was recommended by another architect. “We developed a very good working relationship with Spectrum and we navigated many design challenges, including the language barrier, to deliver a successful project,’’ said Tom Niven, Lighting Designer, BDP. ‘‘Spectrum was pivotal to the project and without them, it wouldn’t have been possible to get the end result we have.’’

The discrete size and inherent energy efficiency of LED technology was used exclusively throughout due to their minimal intervention with the fabric of the historic façade.

The interior lighting was designed to respect the heritage of the spaces. BDP worked closely with the architect and the Spectrum design team to integrate discrete, minimal luminaires that softly illuminate the space with low impact on the listed interiors. Continuous recessed lines in the walls and soffits, combined with cove details to provide ambient illumination and decorative fittings, were kept to a minimum so as not to compete with the ornate interior architecture.

During the design process, the project posed many challenges for the lighting scheme, with numerous key hurdles to overcome.

Firstly, the St. Nickolas building is listed with Russian Heritage to the equivalent of UK Grade 2 making the façade works particularly sensitive. Therefore all cabling had to be concealed from view on the reveals so, in conjunction with the team’s Russian engineering colleagues, BDP had to define a cable route for each luminaire. All luminaires and the horizontal containment were RAL matched to the render finish and taken up vertically from each level at a single point. No penetrations through the building were allowed, so all power and data went back to one point in the roof, with the cabling carefully concealed behind the rainwater pipes. Cable runs were meticulously calculated to ensure, even on the longest runs, there was no voltage or data drop.

The second challenge the team had to face was digital light modelling.

‘‘Our preferred methodology is to be ‘hands-on’ with light but due to the distance between the site and ourselves, mock-ups were not deemed necessary by the client,’’ explained Niven. ‘‘Instead he called for digital light modelling and supplied us with a highly detailed 3D laser survey model. Using Studio Max, luminaires were constructed and joined with their IES webs to create a realistic interpretation of the lit effect the client could expect.’’ Relying solely on digital modelling in this way is an approach BDP wouldn’t usually take, but the accuracy of the results are plain to see from the comparison shots.

The final key potential problem area for the BDP team was contextual sensitivity.

As a residential building, the risk of glare and spill light to residents was significant. The relatively thick window reveals were used to hide fittings from view but custom anti-glare louvres were also designed for most of the luminaires where there was any potential risk of glare. Careful focusing was also used to ensure correct light distribution.

‘‘Given the distance of the building from London, site visits were limited throughout the project,’’ added Niven. “Extremely detailed focusing information was supplied to the installation contractor to allow for aiming. A fully addressable DALI control system allowed for tuning of light levels throughout the night as well as special scenes for Russian celebration days.’’

Although the St Nickolas project posed challenges for BDP, the resulting lighting scheme is one of great precision and sensitivity to the building’s heritage status.

“For me personally, this project posed significant challenges on many levels but is ultimately a testament to international collaboration. Working closely with our Russian counterparts Spectrum, we were able to overcome many technical issues and create a beautiful building that I am immensely proud of,” concluded Niven.