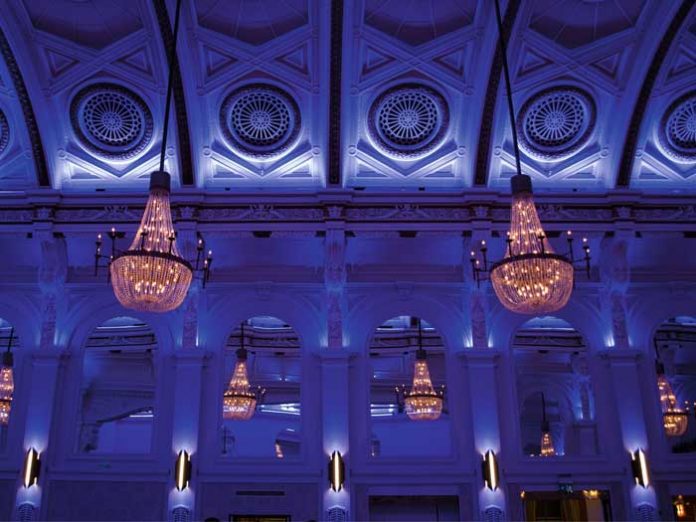 The Grand Hall at the Grand Connaught Hotel in London received an enlightening makeover recently with the help of Tyson Lighting Design. The grade II listed building has been expanded and renovated over many years, with the earliest part dating back to 1774 as part of the original Freemasons’ Tavern. The building was then remodeled into the now known Connaught Rooms between 1905-10, creating a suite of dining, meeting and entertainment rooms.

The De Vere-run occasion rooms play host for many prestigious events throughout the year, such as high-end fashion shows, including London Fashion Week’s ‘Fashions Finest’, which will be making a second appearance later this year. However, the venue owners have been restricted with fixed, outdated spotlights that limit the potential the grand space could exploit.

The pre-existing lighting installations were comprised of a central run of large crystal chandeliers and reflecting crystal wall lights. Within the high level vaulted ceiling were a number of disused and unmaintained spotlights. These were not successful nor did they create the impact the space required or deserved.

The brief for the client was to create an upgraded version of the already existing spotlights and uplights. However, due to the listing rank of the building, designers and manufacturers were restricted with flexibility of positioning locations and power source points. Another factor they had to consider during the evaluation process was the concealment of fixtures around the key architectural areas. In addition, the client also wanted to be able to change the colours and atmosphere of the space, all in order to broaden their clientele and create an element of competition with other local venues.

The Principal Haley Company brought in Tyson Lighting to the design process, which then provided NJO lighting elements to the project.

Due to the architectural sensitivity of the building, the initial steps made towards the refurbishment included a full site survey, which was then examined and approved by English Heritage and the conservation architect. Detailed lighting layouts and concept visuals were all submitted as part of the application and review process.

In order to accomplish the vibrant and pastel colour schemes, RGBWA luminaires were brought into the scheme. Linear runs off medium beam profiles were positioned in an existing trough space to illuminate the ornate barrel vault ceiling. The second layer down was to highlight the ornate detailing to the high level columns. This was achieved using miniature RGBW uplighters, which were surface mounted to the plinth detail. A bespoke wall luminaire was designed to provide both white and coloured light, and direct and indirect light onto the columns, thus bringing lower level coloured wash lighting down into the space.

The lighting control system created by DMX is run via a Pharos web-based controller, which allows the operator to control the system via a tablet. Flexibility was a key element for the client, so the scheme was designed in a zoned system, giving full control of the space.

The Tyson lighting wall fixtures are made with bronze plated steel in a classic Art Deco inspired design. With LED strip lighting and NJO spotlights hidden behind the steel encasing and opal perspex central strip, the wall lights add an element of sophistication and tradition while being modern and energy efficient. They are used along the length of the room, fixed to the column uprights, to reiterate the linear theme and symmetrical consistency throughout the Hall.

London is a time machine of historical architectural buildings. What Tyson Lighting and NJO have brought to this iconic building is a splash of vibrancy and Modernism, whilst maintaining respect for the architectural features within the room. It is vital to be able to light a room without the fixtures becoming intrusive or detract from the overall architecture.

The fittings should not be visible unless they are present for decorative purposes, which Tyson Lighting have achieved in this project.