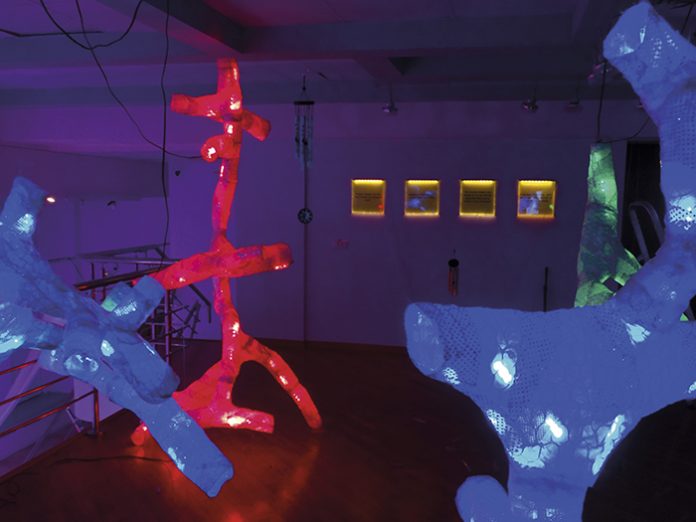 Russia’s National Centre for Contemporary Arts (NCCA) recently launched a large-scale audio-visual project in Moscow dedicated to the study of sound in contemporary art… with a little help from lighting.

The TO SEE THE SOUND festival is an organic continuation of a joint project of Russia’s National Centre for Contemporary Arts (NCCA), and TodaysArt – LUCIDA Space (which took place in January-March 2014) – in collaboration with the Goethe Institute and Moscow City Galleries Network as part of the 6th Moscow Biennale of Contemporary Art.

While LUCIDA Space was mainly dedicated to the phenomenon of light, this time the main object of aesthetic reflection was sound in all the multitude of its manifestations. Aesthetic images that simultaneously affect all senses are born out of the never-ending dialogue of light and sound.

TO SEE THE SOUND began in September at different venues around Moscow. The festival program included exhibitions, performances, concerts, lectures and public talks with artists.

The festival presents the work of numerous contemporary artists that use integrated installation forms, where the sound creates a new artistic integrity organically interacting with the image (video projection, photography, computer animation), with technology and situational developments, thereby showing its limitless phenomenological presence in the world.

The exhibition at Gallery Beliaevo is built on the principle of the Mobius sound loop and reflects the idea of perpetual motion and return of the sound to its original state. In this case, the sound itself, acoustics in general and music are subject to movement and circulation as a cultural phenomenon. The imagery of the exhibition is based on quotations and references to previous historical experiences of a contemporary listening audience – a huge and varied sound-music culture, including the minimalism of casual human speech.

The uniqueness of sound and acoustics in our current modern life realises itself in the fullness of historical experience of a person, the experience of hearing and sound production – from Vladimir Tarasov’s audiovisual bass installations to Maxim Ksuta’s electroacoustic projection. Music, sound, light and acoustics in the optics of artistic vision – a myriad of possibilities of recourse to the world, its understanding and savouring.

At the heart of Mobius sound loop exhibition is the idea of cyclic development of the sound and music in contemporary culture. Geometry of Light VVV by Nargiza Usmanova portrays the cyclicity of lights and repetition, infinite like Mobius loops to represent the geometry of lights. Geometry of Light VVV, like an encrypted abbreviation, represents the infinite zig-zag lines of light. The huge structural geometric shapes organise spatial composition. The figures are constructed from GVA linear product Highlighter HL-DL with round and flat diffusers. Plastic film acts as a connecting reflector combining shapes and drawing the movement of light using GVA INFINITY Technology, Highlighter HL-DL, STR9 RGB and LIRA products. Mechanical and technical support was from Julian Verrall and Peter van Nuland.

Usmanova is the Chief Designer at GVA Lighting. Originally from Belarus, she graduated from the Belarusian Academy of Arts and is passionate about the integration of art and light. Her original works are in private collections in Belarus, Russia, Kazakhstan, Finland, Turkey and Canada.

Originally from Belarus, Walery Martynchik has lived in London since 1990 exhibiting nationally and internationally. His Misterium Cosmographicum installation is named after the 16th century book of cosmological theory by astronomer Johannes Kepler. The installation consists of abstract structures lit from the inside by coloured LEDs.

The other installation is devoted to the work of the 20th century philosopher Ludwig Wittgenstein. Wittgenstein’s Light logic consists of a number of tall rectangular semitransparent boxes covered with text and photographs of the philosopher, lit from the inside by white light.

The TO SEE THE SOUND festival runs until 31 January 2016.