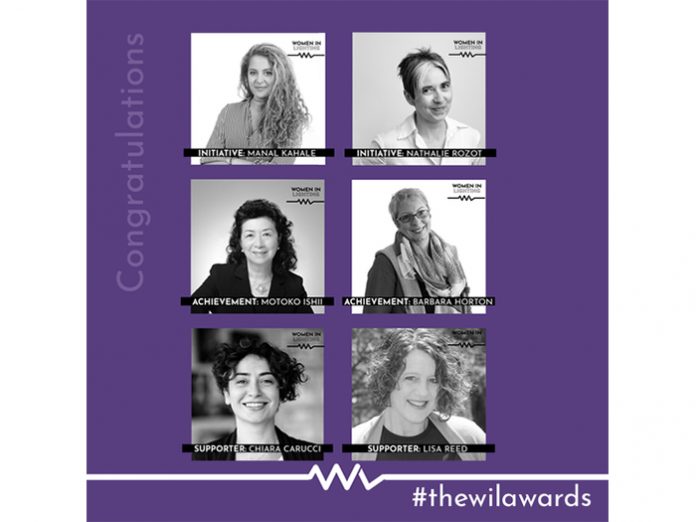 (Online) – In an online ceremony held on 10 June, the winners of the inaugural Women in Lighting Awards were announced.

Established to seek out and celebrate women’s achievements, and the achievements of those who support them, the WIL Awards was open to nominations for accomplishments large or small, for people that did something special in 2020, and was broken down into three separate categories – Achievement, Initiatives and Supporters.

Entries opened on 8 March, to coincide with International Women’s Day, and throughout the entry a process, a total of 180 nominations were made, resulting in 141 nominees from across 36 countries.

Each category had a separate judging panel, comprised of Women in Lighting Ambassadors, and two winners were selected from each category.

The Initiative category looked to highlight new ideas and initiatives that sit alongside the lighting industry, celebrate ideas that push the lighting profession forward, or use light to help the wider community. The two winning initiatives were Light for Lebanon and Light Reach, led by Manal Kahale and Nathalie Rozot respectively – both of which are intertwined with each other.

To date, Light for Lebanon has raised US$75K and already afforded the purchase of almost 1,500 solar lights. Kahale’s ground team has provided lighting to the Beirut Fire Brigade and distributed solar lanterns to residents plunged in darkness and to address immediate safety and security issues.

Light Reach was set up by Rozot, and is a solar lighting initiative by lighting think-tank PhoScope, designed to leapfrog over utility grids to light work and play, and to boost the wellbeing and economic growth of underserved communities worldwide. As well as supporting Lebanon, they have also worked on projects in Puerto Rico. Light Reach is a WiL partner, and any profit from the sale of WiL T-shirts is forwarded on to help fund its projects.

The Supporter category was intended to shine a spotlight on those who have helped us in our lives – people who enable us to keep moving forward and have mentored us or supported us in some way. The winners of this category were Chiara Carucci, Italian lighting designer based in Sweden; and Lisa Reed, a lighting designer in the USA.

Founder of the IALD Nordic chapter and, together with Giacomo Rossi, founder of the Facebook group “Italian Lighting Design promotion group”, which is aimed at spreading the culture of light and promoting lighting design in Italy, Carucci also supports and publishes WiL events on social networks and collaborates with the WiL ambassador in Italy in the organisation of various initiatives.

Lisa Reed has an extensive professional resume of awards and is known for her altruistic character and dedication to helping others. She founded Ladies of Lighting in St. Louis, helped expand WILD across the USA and is a passionate advocate for diversity in lighting. She received the 2014 IES Presidential Award for her work with Emerging Professionals and in 2020, she was named as one of the top 20 women in construction in St Louis. She also co-authored the survey Why Women Leave Design and how to Keep Them and presented the results at IALD Enlighten 2018.

The final category, Achievement, honoured the achievements of two icons in the lighting design industry who have been a massive inspiration to female lighting designers throughout their careers – Barbara Horton and Motoko Ishii.

Barbara Horton retired a few months ago having spent more than 40 years as a lighting designer, rising to CEO of HLB Lighting, and enabling it to become the largest female-owned company in the USA during her tenure. She has mentored many young professionals, is a Past President of IALD and one of the founders of the Women In Lighting Design (WILD) movement.

When WiL was established, she said: “Women in lighting design have somehow broken the glass ceiling in many parts of the world by creating their own destiny, starting their own firms and being recognised for their achievements. With more awareness, communication and mentoring we can continue to educate and support those who still struggle and ensure future generations will continue to succeed in lighting design and other parts of the industry.”

Motoko Ishii was accorded the highest accolade in Tokyo on 1 October 2020, when she was named as a Tokyo Honorary Citizen and commended by the Tokyo Metropolitan Government as someone who has contributed to the rise of Japanese social culture. She has had a 52-year career in lighting and has achievements too numerous to mention.

Ishii also supplied a quote for the WiL website when it launched: “I am very glad to say to all the people who are engaging in lighting business that the highest position of Japanese mythology is a Goddess called Amaterasu. She is the Goddess of Light and her power is falling all over the world. Please read Japanese mythology and recognise women’s power.”

The full awards presentation is available to view online here.