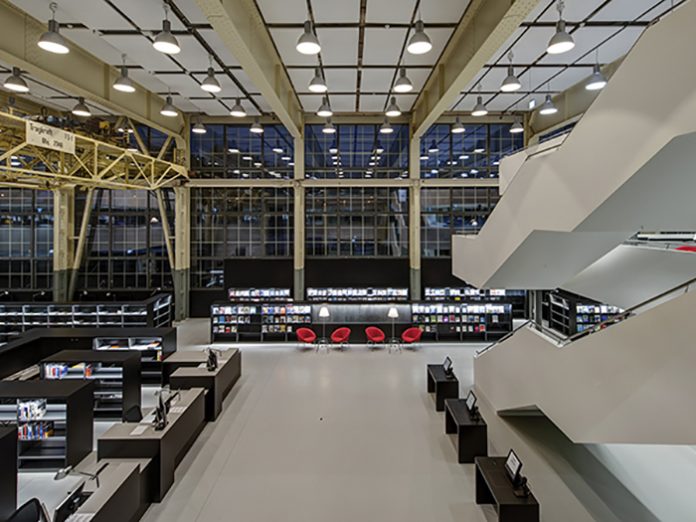 The new Zürich University of Applied Sciences (ZHAW) library based on the Sulzer site in Winterthur, Switzerland is a state-of-the-art facility with a floor space of over 6,000 sqm. It houses more than 120,000 media items, a computerised self-service borrow and return system, around 700 workstations, training rooms and a cafeteria.

The Sulzer site is a former industrial park operated by Sulzer and the Swiss Locomotive and Machine Factory in the centre of Winterthur. Since 1990 a new district featuring a wide range of residential buildings, offices, leisure facilities and educational establishments has been created on the site. The latest project involved bringing together five libraries of ZHAW in the former Sulzer Hall 87.

In November 2012, following a period in which it was used as a concert venue, the building was converted into a modern library based on plans drawn up by P&B Partner Architekten.

The three-storey workshop building was constructed as a steel skeleton with reinforced concrete floor slabs. The curtain-wall constructed façade consists of fibre-reinforced cement cladding and large glazing panels. During its renovation, the defining architectural elements were retained. With this in mind, mezzanine floors, detached from the façade, were installed only in certain areas in the eleven-metre high hall; leaving the original riveted steel upright and crossbeam structure omnipresent, and even the old crane tracks spanning the rooms as before.

Due to the cavernous nature of the building, lighting designers vogtpartner were faced with the challenge of finding luminaires that would suit the old industrial architecture but would also produce excellent illumination at desk level from a great height for studying. vogtpartner defined luminaires from Fluora along with LED components from Tridonic to offer the ideal solution. The classically shaped body of the luminaire, which comprises a cylindrical top section and a parabolic shade, houses LED modules and LED drivers from Tridonic.

The original plan was to service the different room heights from three metres in the training rooms to eleven metres in the hall at ground level, with luminaires of different sizes, but the Tridonic LED portfolio offered all the necessary combinations of LED modules and LED drivers to equip a single luminaire type with the appropriate technology to suit the different requirements.

TALEXXmodule FLE LED modules were used in areas in which the luminaires are mounted at great heights as they have been specifically designed for illuminating large halls. For areas with moderate ceiling heights, Fluora selected the TALEXXmodule SLE GEN3 modules, which Tridonic offers mainly for use in spotlights and downlights. Both LED module types operate in an output range that calls for active cooling, which is provided by a fan located at the top of the luminaire housing. Tridonic conducted a series of measurements to support the correct design of the active thermal management system and gave the customer approval for the combination of fan, LED modules and LED drivers. The LED modules are supplied with power via TALEXXdriver LCAI 100W and TALEXXdriver LCI 35W.

Martin Vorburger of Fluora commented: “Tridonic’s extensive range of LED modules and matching LED drivers has enabled the very different lighting tasks in this project to be covered by a uniform luminaire design. The technical support that Tridonic offered us in integrating the components was an important factor in the efficiency and durability of the luminaires.’’

At the ground level, in the eleven-metre high hall, are three separate areas: the library, the administration offices and a café. On the first floor are classrooms and on the second floor, under large-scale skylights, students can use a room structure which serves as a learning and reading area.

The lighting design has been tailored for purpose, providing a clean and bright working environment that supports focused and quiet study, a creative exchange in group rooms and encourages knowledge transfer in the classroom environment without feeling fatigued. Therefore the architectural features haven’t been left in the background but have been integrated into the interior scheme with a conscious use of light and shadows.

The large-scale skylights allow a large amount of daylight in during the day. In contrast, to avoid so-called ‘black holes’, at night the skylights can be illuminated by LIG’s Linearlight Tube, specially adapted for the project with a deep blue light to create an association with the night sky during twilight.

The rest of the lighting follows in this style despite the intervention of the architecture. Luminaires in the existing structure have been built-up or suspended to adopt the industrial theme.

With glare control in mind, newly inserted spatial elements such as the main staircase are illuminated with LIG’s custom recessed LED strips that have 360° louvres to reduce spill light. Workspaces, such as office areas and the endless-working space on the ground level, have cautious base lighting, decreasing as daylight increases, leaving the ideal illumination provided through Artemide Tolomeo table lamps and therefore controlled by the individual.

The learning landscape on the second floor is also extensively brightened. Modern table and floor lamps from Artemide complete the lighting design to create adaptable discussion and work conditions.

Overall, vogtpartner has helped to repurpose a vast industrial space through practical and versatile illumination without sacrificing the building’s rugged charm.