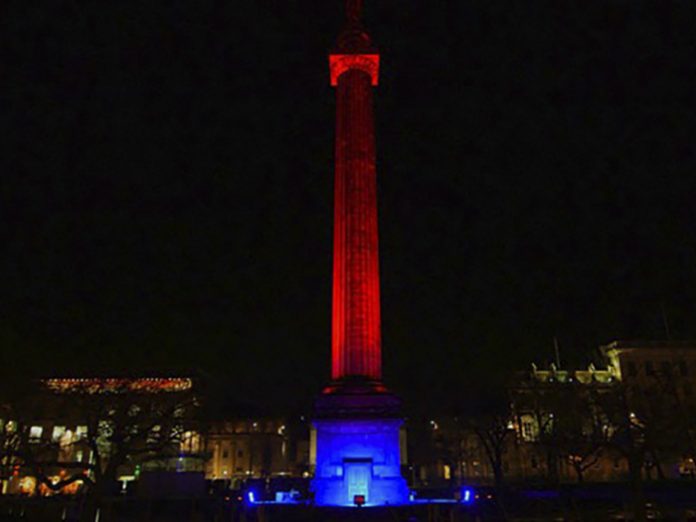 The Light Fantastic event, took place from sunset to sunrise between 12 March to 28 April 2015. It invited visitors to change the face of the Edinburgh skyline with a tweet. Organisers encouraged the public to tweet their favourite colours using the hashtag #lightfantastic, which would then change the lighting state at the Melville Monument automatically.

Black Light invested in a LumenRadio CRMX Nova TX2 RDM transmitter, four CRMX Nova transmitters and four outdoor-rated receivers, plus ancillary antennae and cables which were utilised on this event.

Heading up the team on the project was Black Light’s Calder Sibbald, alongside moving light and systems technician Andrew Green, who was responsible for the Wireless DMX and ArtNet systems.

“Phil Haldane from Black Light created custom script allowing the software to poll the amount of tweets every three minutes. The most popular colour tweeted would then automatically change the lighting onto the monument”, said Green. “The LumenRadio products were used to create a wireless DMX link between the control room in the centre of the monument, and the fixtures on the outside perimeter of St. Andrew Square.”

“When choosing which wireless system to invest in we did a lot of research as our main concerns were reliability, range and functionality. As we were using the system in a heavy Wi-Fi traffic area in Edinburgh’s city centre, it was imperative that the system was reliable, not prone to interference, and did not disturb other networks. LumenRadio’s coexistence function was ideal for this, as well as its high range and durability.”

Operating licence-free on the 2.4GHz frequency, LumenRadio’s patented Cognitive Coexistence technology ensures optimum performance even when other wireless systems are operating in the same area. Its CRMX technology continuously scans the wireless frequencies, detecting activity from other networks and where gaps are available. The radio modules hop into these available frequencies, making best use of the available space whilst reducing the effects on other networks.

“I was most impressed by its ease of use. The SuperNova software provides an ideal interface to set up the devices and monitor them during use, whilst the capability to monitor RDM devices and Wi-Fi traffic in the area is also extremely useful,” said Green. “I configured the system at Black Light’s offices, and once onsite it worked first time, and for a further six weeks without fail, whilst enduring some typical Scottish weather – including high winds, rain, snow, and even sun!”