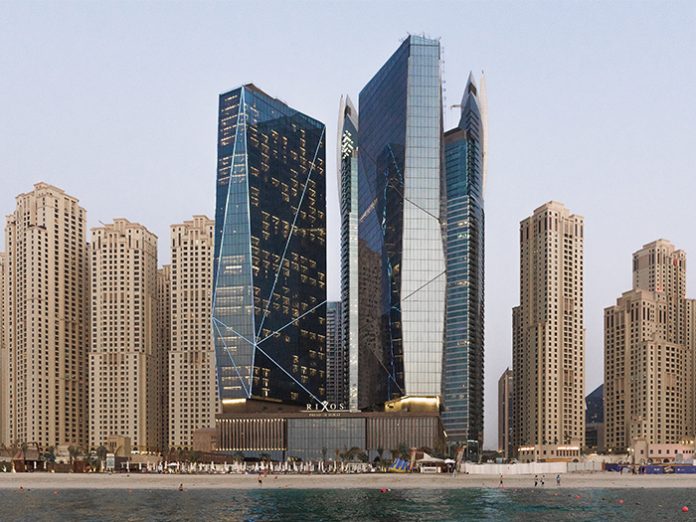 Dubai’s Jumeirah Beach is one of the UAE’s most famous areas, and for good reason. With a number of high profile hotels and resorts, the area has become known for its grand, extravagant buildings.

Alongside the sand-coloured architecture of the surrounding beach hotels, the Al Fattan Crystal Towers’ sleek, angular glass façades bring a glamourous sheen to the Dubai skyline. The architectural idea behind the towers’ unique form was to “create a crystal feeling in front of the horizontal sand atmosphere”.

The lighting for this striking new development was designed by ZKLD, which developed schemes for the interiors, landscape, and the dramatic façade. Mustafa Akkaya, Design Director at ZKLD, explained the thought process behind the lighting design: “The project is in a region that culturally has major interest in grandness and splendour. From the beginning, this was well-known and obviously affected the lighting design decisions. However, we also knew that we must set a balanced design under this flamboyant appearance that welcomes people who stay or visit the hotel, and creates a cosy ambiances to make them feel at home. In contrast to this flashy envelope, interior areas and landscape lighting also followed these intentions.

“An established bond between dynamic stance and serene ambiance was most desired by ZKLD from the beginning of the design phase.”

Throughout the design process, ZKLD also established a bond with the architectural team, thanks to a “mutual exchange of ideas”, that Akkaya feels “helped to make the whole process as streamlined as possible.”

This was of particular use during the development of the façade lighting. Inspired by the refractions and reflections that light creates when passing through a crystal, ZKLD sought to highlight the triangular forms on the façade through lines of light. These lines make the building rise dynamically at the oceanside, in contrast to the surrounding buildings.

“Emphasising the crystal effect on the façade through lighting was one of the main challenges that we encountered, because the building is located in one of Dubai’s most famous areas, and can easily be seen from different angles throughout the city,” Akkaya explained. “Therefore, the gutter detail was designed by considering the lighting effect as seen from a distance. It took several mock-ups and collaboration with the architectural team to execute the necessary detail of the gutter to obtain the desired result.”

While the façade lighting creates a lasting impact from a distance, the designers also wished to bring this feeling into the interior areas as well, with traces of the fractal forms dotted throughout.

A shining example of this can be found in the Alley – the lobby area, which acts as a spectacular focal point for the interior design. “Because it was like a passage connecting the city to the beach, it was aimed at attracting people inwards. Considering this, we wanted to introduce a brilliant light effect on the ceiling to grab attention,” Akkaya said.

“Guided by the crystal form, triangular shaped surfaces are created under the skylights, and are illuminated in a way that creates a magnificence and brilliant effect in the area.”

Through the use of Traxon’s DMX-controlled PXL Board LED fixtures, a play of light, colour and motion has been created, bringing a modern touch and an “attractive soul” to the vast lobby space that, according to Akkaya, “welcomes not only the people who stay at the hotel, but also visitors from the outside”.

Lighting has been seamlessly integrated into the architectural fabric of the project throughout its many different spaces, creating a smooth atmospheric flow as visitors transition both between the exterior and interior spaces, and once inside from one area to another. “By using the geometry supported by the lighting effect in interior spaces, we have created a uniform identity in all spaces, even though these spaces have different functions,” Akkaya continued. “Of course, the lighting levels and distributions have been considered according to their functions.”

Such examples of this can be found with the recurring motif of continuous lines of light, echoing the eye-catching effect of the façade lighting, through the use of Ilmas’ Estro Comfort and Osram’s Linearlight Flex fixtures. These lines of light are complemented by recessed up- and down-lighting from Flos, Erco and Endo.

Despite its grand, exuberant appearance, one of the key facets of ZKLD’s design approach was “interlocking the soul of both dynamism and calmness in one structure”, while creating a design that is holistic in its appearance.

To do this, Akkaya explained that the design team “intended to establish a bond between dynamic stance and serene ambiance”, with light being used to highlight the architectural form of the towers, while creating an atmospheric flow between spaces.

Although the architecture of the Crystal Towers is striking in and of itself, the lighting design from ZKLD is a major contributor in its success, highlighting the impressive structures and drawing visitors in.

“With the help of the glittering lighting design, Crystal Towers has become a stomping ground not only for tourists but also for city dwellers,” Akkaya said.

“Most importantly, it has become an iconic sculptural crystal, that has brought another identity and another level of prestige to its surroundings.”