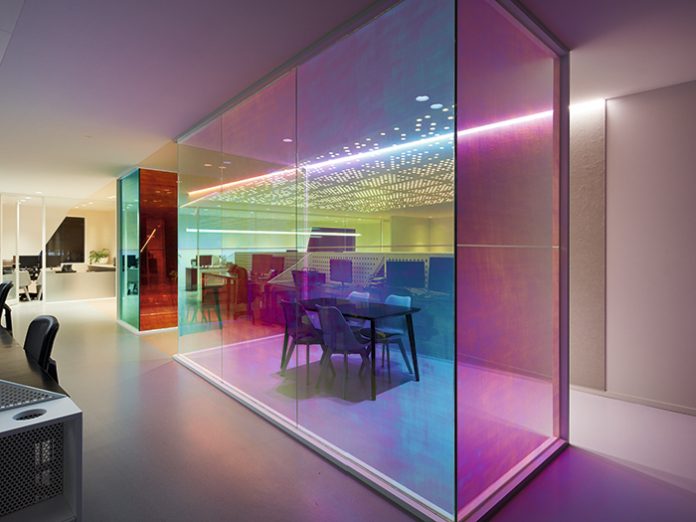 Ambience’s new workspace is located in Melbourne, Australia, and is home to its experimental and artistic office lighting installations.

The old chemical supplier factory and office was purchased by Ambience and transformed into their artistic, labyrinth-like playground space.

“Our brief to our interior designers and architects, Studio Y, was to create a workplace where people wanted to work. This had two meanings; one where it created a harmonious and productive workplace, but most importantly an environment where people wanted to come every day,” explained David Justice, Managing Director at Ambience.

Taking a mere seven months from conception to completion, this project was very important for the Ambience team, as it was essential its own workspace reflected the light-hearted branding and creative tone of the firm.

Designed to give varied stimulation at different times of the day, making use of the bright Australian sunshine to the rainbow prism effects and colour gradients, with bolder colours and contrasting shadows, depending on the time of day.

The design process encompassed a varied amount of restrictions and challenges the team had to overcome. As with many projects, budget was of course an influencing factor when it came to renovating the older building. A customised perforated ceiling system was put in place to help control the daylight and heat levels, which in turn created a smooth, calming and futuristic effect.

Stephen Justice, of Ambience, reflected on the team’s journey through production: “We ended up changing some of the creative execution throughout the process, as it became quite experimental. As the space evolved, our lighting approach evolved with it. For example, we created some beautiful custom perforated linear table features, but when we went to install them, we thought they were cluttering the space so we made the tough decision to remove them.

“We added linear LED profiles after we added the dichroic film onto the glass to create a laser effect. The dichroic film on the glass itself is a lighting element where by depending on the time of day and amount of natural daylight that filters into the space, reflects and bounces colour and shadow contrasts throughout the office, walls and ceilings.”

All of the downlights were custom painted to live harmoniously in their allocated colour zone and linear LED extrusions were painstakingly assessed to be placed for the greatest effect and interaction with the dichroic and seating arrangements.

David explained how this project differed to others Ambience had previously worked on: “The creativity of the lighting execution was paramount. With other projects, lighting is usually, at best, a secondary consideration. However, with us being the lighting designers, the entire project was centred around light.

“The pressure was on being able to execute a lighting design concept that provided an overall task lighting with consistency. The concept was tried many times in the past, which resulted in a lack of overall consistency.

“The consistency of light across the entire perforated ceiling added another layer and dimension to the office space; one that is prominent in the aesthetics overall, yet a subtle and calming environment can be felt when working under the light itself. It gives varied visual stimulation at different times of the day, from mesmerising natural sunlight to mind-bending prism effects and arresting backlit colour gradients, with colours becoming denser and shadows more dynamic.”

Working simultaneously to the dichroic film installation is a striking large lighting feature; a custom-designed backlit double layered acoustic panel in the ceiling. It was created to provide mood-calming and gentle lighting for staff in the main office area without cluttering the ceiling with suspended fixtures.

The finished product of Ambience’s new office is a modern and timeless space that has staff and visitors alike pausing to take in the colourful Australian sunshine and creative installations in the workplace.

“When the staff entered the space for the first time, they were gobsmacked by the beauty and mood of the space,” claimed David.