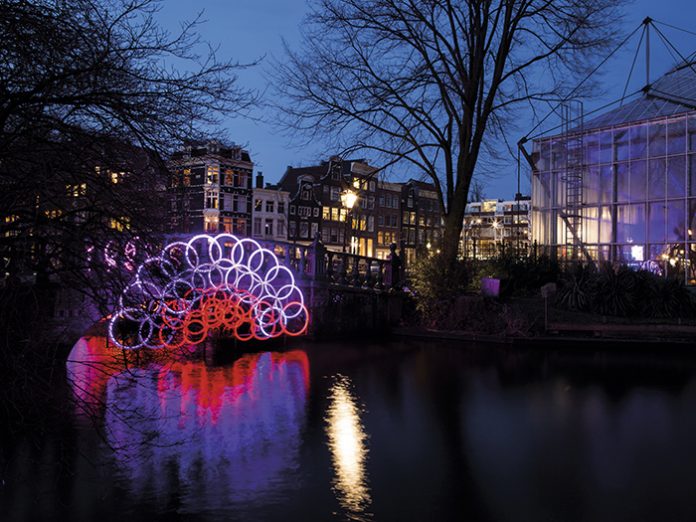 This edition of the 55-day Amsterdam Light Festival was dedicated to the theme ‘Friendship’ and took place from 28 November 2015 until 17 January 2016. mondo*arc editor Paul James was delighted to be on the judging panel to choose the installations and visited the Dutch capital to see the results.

Now in its fourth year, the Amsterdam Light Festival ran from 28th November to 17th January for a 55 day extravaganza of lighting creativity. The 38 lighting and multimedia installations attracted an amazing 850,000 visitors (100,000 more than last year).

I was honoured to be part of the judging process alongside such luminaries as American light artist Janet Echelman; Rogier van der Heide, artistic leader of Amsterdam Light Festival; and Jeroen Junte, a freelance editor who writes about design and architecture; to choose the magnificent installations for this year’s event. The festival has grown year on year in terms of popularity both with artists and visitors.

Amsterdam Light Festival consists of two main routes. The boat route, Water Colors, offers a unique view of the city from the perspective of Amsterdam’s famous waterways. The walking route, Illuminade, winds its way through the culturally rich neighbourhoods Weesper and Plantage in Amsterdam East. During the festival, light played a central role in the city as museums and institutions organised light-related activities introducing visitors to innovations in light art.

The fifth edition of the Amsterdam Light Festival will take place from the end of November 2016 till January 2017. The deadline for submissions is March 11 2016, 10am CET.

To the Chilean artists Macarena Meza and Daniela Orallana of Oh my Light! Studio light art is a way to generate emotions by transforming light into a sensory experience. Their Friendala is a good example of this. Half of the work consists of a big mandala, an Indian symbol for unity and integration between peoples. The reflection of the light in the water constitutes the other half of the circle and makes the work complete. The artists hope that in turn the work will infuence the visitors: “We hope that the Friendala will subconsciously touch the people who observed it so that they will take along some of the harmony and the peace it stands for.”

Those who visited the festival two years ago, would recognise Ralf Westerhof’s style. In the 2013-2014 edition he created Drawn in Light, but with this new project, Paths Crossing, he manifests himself even more lavishly.

The work constists of colourful, 160 metre long lines of light that stretch out over the canal from bridge to bridge. While you are tranquailly sailing along in your boat, the work comes alive. Suddenly you feel as though you’re inside an animated cartoon and your eyes are the camera. All around you a story about friendship begins to unfold. The abstract lines are like a colourful linear diagram – every one of them has its own colour and represents a person. Lines moving towards each other are friendships growing. The lines also form figures that make up sculpture groups, representing certain stages of life. Paths Crossing is a universal story about paths that may cross, or run parallel to each other, sometimes for a short time, sometimes for life.

Infinite Support is a project created by the Dutch collective Lightform, which is made up by the young creatives Dorus van Lieshout, Ivar Posthumus, Daniël Thomassen and Raoul van der Ploeg. The collective, four sworn friends, focuses on finding exciting applications of new technologies. With Infinite Support they translated their ideas about friendship into a beautiful light object. “To us friendship means supporting one another through thick and thin. As far as we’re concerned, friendship is never ending.” What we see are two drop-shaped objects, visible from afar beause of the subtle changes of different colours of light, enticing the public to come closer. The two shapes turn out to need each other to stay upright. If we come even closer, the sculpture, that can be touched, turns out to contain mirrors, suggesting an unfathomable depth. According to Lightform, the mirrors symbolise real friendship: a bond without limits.

The theme of the project The Uniting Lightstar by Venividimultiplex is clearly friendship. To begin with we see from afar a multangular, luminous object. More precisely a dodecahedron, which, in its turn, consists of twelve pentagonal surfaces. That number corresponds with the number of stars in the European flag. Getting closer, you see numerous strings of blue light which connect all the points of this artificial star and which represent the continual relationships between the European countries and their inhabitants. The Uniting Lightstar contains another characteristic of friendship, namely the human capacity to boost friendships and let them grow. The sculpture has been positioned in such a way that it is a part of both the boat route and the walking route and the festival’s visitors collectively control the intensity of the radiance of this diamant. With The Uniting Lightstar, Venividimultiplex wants to convey the essence of friendship in an iconic manner.

Winged Migration is an interactive video installation created by theatre maker Judith Hofland and filmmaker Tessel Schmidt. In the Wertheimpark there is a larger than life-size birdbox that looks out on to an old tree. As soon as you enter the little house, a bird starts to fly. The more people come in, the more birds start to fly around freely. To people freedom is not always as self-evident as it is to birds. In the theatre Hofland and Schmidt often use video, trying to confront the audience interactively with the current situation in Europe. In this work, as in many others they have created, the artists combine reality and fiction. In this case they use video mapping on an existing, old tree, and add the projection of birds. Visitors of the birdbox are invited to take a stranger inside with them in order to let more birds fly and make the tree glow, which constitutes the interactivity of the piece.

Run Beyond is a work about the jump we all have to take in our lives: the jump to freedom. Artist Angelo Bonello does not tell us what kind of freedom, the spectator has to make up their own mind about that. The figures flash in sequence to give the impression of the movement of the jump before all figures shine together.

As Bonello explains: “To me this work is about the power of imagination, a power so strong that it makes individuals conquer their fears and limitations and causes them to open up to other cultures, new friendships and unknown worlds.”

The two spectacular heads created by the Hungarian light artist Viktor Vicsek show countless emotions and react to each other across the canal. Each head has 4,000 individually controllable LEDs to provide different facial expressions in various colours. As they are connected by WiFi, they react to each other, but also to the interference of visitors. They conduct conversations by means of light. Only when a new boat passes, these talks are cut short, whereupon a new conversation between the heads commences. What is it exactly they’re saying to each other and to the visitors?

In science a holon is something that is simultaneously a whole and a part. This looks like a brainteaser, but it is applicable much more frequently than you would imagine. Think for example of the cells that together make up you body, or of atoms that exist on their own, but also make up a molecule. Holon Light, created by the designers Michiel Martens and Jetske Visser, also consists of various parts that form one whole. Holon Light will give you as a spectator an unforgettable experience: a swarm of spinning, hypnotising light spheres is formed directly above the water. They become more fluorescent as they turn and seem to fuse the loose strips.

Polygonum is an artwork that investigates the differences (and similarities) between organic and geometric forms and between natural and artificial forms. Them Sculptures, the studio of Belgian artist, sculptor and designer Tom Dekyvere, made the work. Dekyvere has participated in two previous editions of Amsterdam Light Festival.

According to Dekyver: “Today, we live in a world that manipulates the natural environment. Digital devices and microchips are intertwined with the human body. In art, we also see a lot of nature-based forms.”

BIRDS FLY AROUND WITH YOU

Birds Fly Around with You, created by the Japanese light artist Masamichi Shimada, is an interactive licht sculpture based on the zoetrope, a pre-film animation device, consisting of a cylinder that is spun at a certain speed. Looking through the slits in the cylinder, you see a figure moving. Shimada has taken this simple principle out of its casing and put it here as a larger than life-size object. A visitor who enters the garden will activate the magical machine. The birds illuminate one by one, giving the illusion that they are flying. The more visitors that come into the garden, the more birds will fly around.