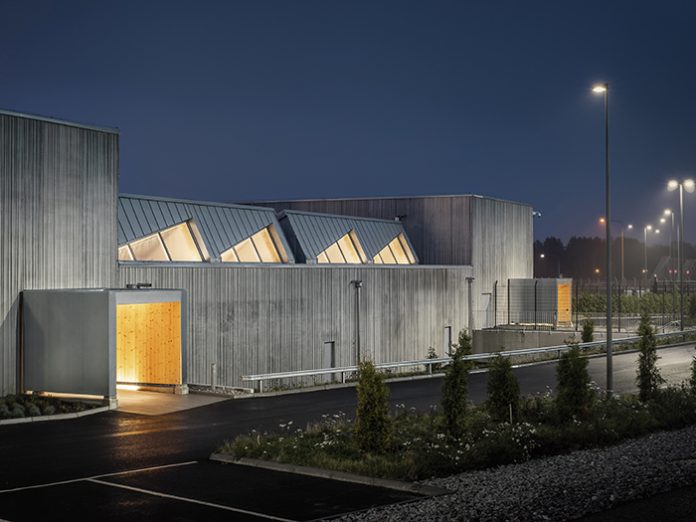 As part of the ongoing expansion of Stockholm’s Arlanda International Airport, Tengbom has designed the Arlanda VIP Services – a slice of Scandinavian luxury for high-profile travellers.

Nestled away from the hustle and bustle of the main airport terminals, Arlanda VIP Services, at Stockholm’s Arlanda airport, provides a luxurious retreat for travelling royalty, dignitaries, world leaders and celebrities.

Designed by Tengbom Architects, the private terminal captures the essence of ‘Nordic Luxury’, with the delicate blend of concrete, wood and stone creating a simple yet sleek environment that the architects hoped would create a “visual experience that will linger long after its occupants depart”.

From the outside, the building is as discreet as it is functional – an anonymous concrete shell that blends into its surroundings, avoiding any undue attention for the VIPs passing through. However, on entering the terminal, the hard outer shell gives way to a warm, welcoming spot of luxury, showcasing an architectural concept that builds on the contrasting relationship between hard and soft, cold and warm, with the Swedish landscape and culture serving as a key source of inspiration.

Inside, wood materials dominate the interior via simple wooden façades and panelling, while leather-bound stair rails, neutral colour schemes and a functional yet expressive curation of exclusive Scandinavian furniture add to the local feel that Tengbom sought.
Mark Humphreys, Practice Director and Partner at Tengbom, explained further: “The materials are quite simple – a cross between stone, wood and cement. We thought this was a more toned down Swedish luxury.”

Originally intended to be an extension of Terminal 5, Arlanda VIP Services is a completely separate, free-standing space within the airport – one of very few of its kind around the world. On entering, travellers go through their own security control and check-in before being directed to their private suite. Here, they can relax, unwind and prepare for their flight, while staff are on hand to cater to their every need, before a car takes them directly to their flight.

Despite its high-end, luxurious finish, the project had a very fast turnaround from concept to completion, as Humphreys explained.

“The story behind Arlanda VIP was that it was meant to be a really quick project – it had a really short timeframe, but it’s also got the highest security class, so it was a challenge. The pressure on us was enormous to deliver a conceptual building, but we thought ‘this building is a really big thing for Sweden, shouldn’t we try to make it a sort of ‘brand’ building for the country?’”

Chiara Carucci, Lighting Designer at Tengbom Studio Ljus, explained the initial concept for the lighting: “The role of the lighting is to create a well-cared for environment, with the distinctive Nordic Light as a reference.

“With light, we highlight the spatial identities throughout the day and year, while reinforcing volumes and the choice of materials. By designing through contrasts made of light and shadows, and cold daylight and warmth, we created a dynamic place.

“As both lighting designers and architects, our desire was to integrate lighting within the architecture and interior design, and to be more sustainable, both economically and environmentally.”

After developing the initial lighting concept, Tengbom worked with electrical consultants Ramboll on the design development and specifications, utilising fixtures from iGuzzini and Reggiani to create a minimalistic lighting scheme that blends into the architectural frame of the building.

“Working with the architects, we designed a special mounting solution for the lighting fixtures integrated within the wooden ribs on the ceiling, as well as several other details, such as very small scale, specially-designed mirrors with 3cm radiused corners in the bathrooms,” Carucci added.

In each of the private rooms, decorative lighting adds to the “Scandinavian Luxury” feel, while customised control systems offer a range of lighting scenarios, such as “Welcome”, “Movie”, “Dinner” and “Lounge”.

While from the outside the VIP terminal appears to be a windowless, concrete bunker, Tengbom was able to utilise natural light to fantastic effect through the use of upward facing windows and skylights – partly due to safety regulations, but also because of the users’ need for discretion and privacy.

“The natural light coming in through the skylights is to create the feeling that you’ve got a little cabin sitting in a concrete box,” Humphreys continued. “So you’re aware of the protective shell, but you can still see the daylight. And the way that the concrete has been rendered, it catches the light beautifully as it comes in, so you’re aware of the outside.

“If you had done a normal building, you’d put all the rooms on the outside, but there’s not a lot to look at outside,” he continued. “If we did that here, we’d have to have bullet-proof glass, which is very expensive, and then curtains drawn, because you don’t want anyone looking in at the guests. So it would have been counterproductive.

“Instead, we decided to make a building with no windows, and just use skylights. The result is an environment that emanates stillness and relaxation from its very core. For us, this is Scandinavian Luxury.”

Indeed the spatial qualities of the terminal evoke a sense of sanctuary, where guests can shake off the stresses of travel, escape everyday life for a while and prepare for their onward journey.

“Scandinavian Luxury is going into the forest and being alone, or going into a cabin and cutting off from the world. And at Arlanda VIP, this unexpected experience in the modern world, when all these people are under all this stress, must be luxury.”