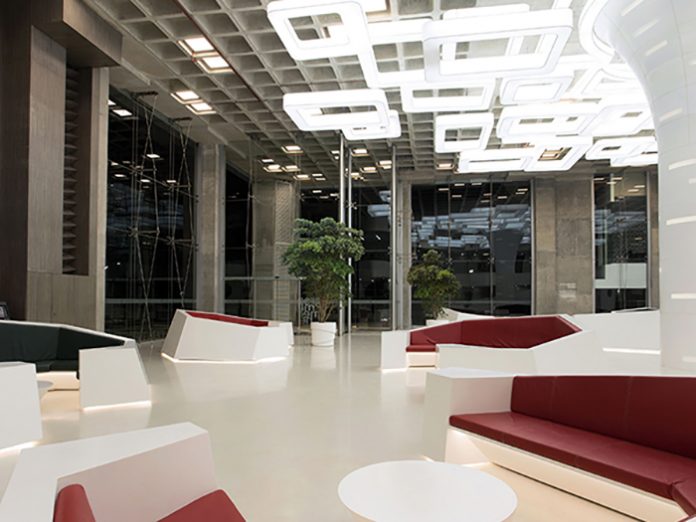 The brief was to design a multi-functional public space that could include a variety of areas and a place where intimate and private meetings could take place.Collaborative Architecture approached this, by setting a benchmark for public space design through its innovation and sustainability agenda. The lobby is dominated by a central column, which supports the waffle slab system that spans 32m x 32m, with a height of nine-metres. The front facing sides have structural glazing, while the sides on the back are stacked with services and toilets.

The lobby functions nearly eighteen hours a day and is equipped with a BMS using dali ballasts for daylight harvesting. The expansive glazing on two sides allows daylight during any season, meaning the system uses minimal energy during the day. The central column acts as the axis for spatial orientation. From this, the lighting design plays the lead role in the overall architectural identity, and the project succeeds in effortlessly merging the lighting design and architectural space into a unified whole. The project is unique in that sense, making the architectural lighting the raison d’être and the identity, not just in stylistic terms, but in terms of tectonic manipulation of the neutral space.

The seating cluster, specially designed for the project, triggers social interactions and creates an undulating topography of contoured volume at eye level, complementing the pattern on the ceiling. The strip light highlights the bottom of the sofa clusters and creates a dynamic pattern that is an integral part of the overall design.

The waffle slab system, one of the earliest design decisions and most dominant part, is left exposed to highlight the structural clarity of the space. The pattern of the waffle system acted as a springboard for the design of the customised lighting, which resulted in a highly dynamic space reflecting the geometry of the structural system. As previously mentioned the central column anchors the spatial disposition in the vast lobby. The architectural lighting has been conceived as foliage which stems from this anchoring element. The column has been clad with corian panels, with special details to provide access for maintenance and service.

The cantilevered meeting rooms are added to the existing mezzanine slab to accommodate private meeting rooms. The lobby has five such private meeting rooms, with four located at the mezzanine level as added cantilevered units, projecting into the atrium space. LED light sources have been used for the project. The customised fabric lights have 1,200 long LED tubes, the passage spaces have 600 and 1,200 LED panel lights and 5W LED spots and the waffle has 600 x 600 LED panel lights to supplement the customised lighting and create a pattern in the waffle, which complements the configuration of the fabric lights. The project succeeds in its sustainability agenda with a Platinum LEED Certification.