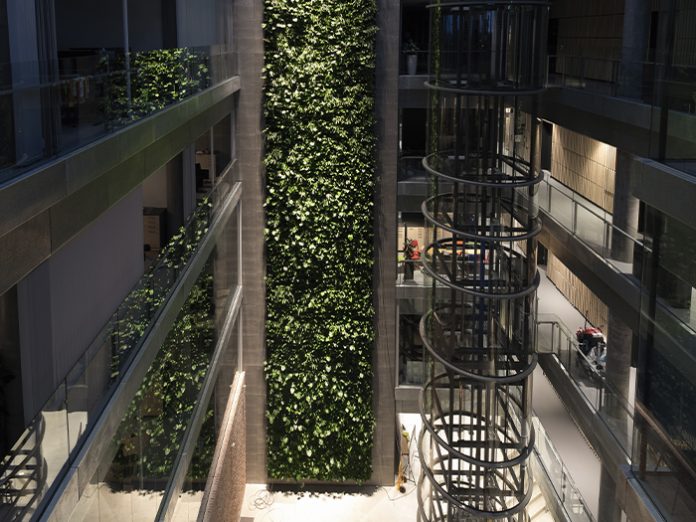 While the focus on creating circadian or “Human Centric Lighting” in workspaces has become a fairly common trend in the lighting industry over the last few years, it is particularly pertinent in the Nordic region, where natural lighting can be at a premium.

In Aarhus, Denmark, the local municipality has recently opened Blixen, a new office building, that takes these considerations into action through a series of interesting, dynamic lighting configurations.

Jørgen Kjer, lighting designer at multidisciplinary consultancy group COWI worked with Arkitema Architects to develop new lighting solutions for the office space. He explained how he got involved with the project: “Around a year before commissioning, the Aarhus municipality contacted me to make sure that the lighting in their new building was sufficient.

“They were afraid that it would be getting too little light, not in terms of lux levels – that was predetermined in the scope of the tender – but in terms of there being enough well-lit meeting rooms and office spaces. They also had a number of areas that needed extra attention and special lighting.”

Following two workshop sessions with the municipality, Kjer was brought on board with a brief to upgrade the planned lighting to incorporate more circadian, human-centric fixtures in the office areas and meeting rooms. Alongside this, there was a desire to make the meeting rooms appear brighter and more inviting, while adding individuality to each space, giving them a sense of variety. “The brief also asked us to look at areas that required special lighting; the main entrance, the reception area, the rooftop area, the vertical garden, a couple of atriums and the food court area,” added Kjer.

As COWI Lighting Design came on board once the project had already commenced, it caused some logistical difficulties when it came to placing fixtures, which in turn caused some tension on site.

“All fixtures for the office space and meeting rooms had fixed positions, and therefore couldn’t be moved,” explained Kjer. “Due to the short time before commissioning, we had to make some quick decisions regarding fly points and fixture positions, because we had to use the present scaffolding.

“It was a friendly fight with the  contractors to place some extra wallwashers, alongside the special lighting. The contractor was, to begin with, quite negative, so during the first couple of months it was a bit of an uphill battle. I did some diplomacy work – everything from bringing cakes to meetings and showing my willingness to cooperate.

“After all this hard work, the contractor was ‘looking forward to seeing all my crazy ideas’, was helpful, and we had a good process for the rest of the project.”

One area in particular that Kjer cited as particularly challenging during the course of his work on the project was the main entrance. The building’s entrance features dramatic artwork on its ceiling, greeting those entering the building. The artwork is an interpretation of downtown Aarhus,corroded into a reflective metal surface. These graphics create very distinctive, beautiful reflections on the pavement, giving a lasting impression to visitors.

However, lighting this artwork was a challenge for Kjer. “The task was to light up the metal artwork on the ceiling without creating any light spill through the windows, as there were office spaces just on the other side of the glass,” he said.

“After a lot of thinking, cracked the nut and realised that the only way to go was to use profile fixtures and framing projectors recessed into the ground, because placing fixtures on the walls was a big no go from the architect.

“However, the concrete construction on the ground was only 60cm deep. Because of this, we developed three inground boxes, each fitted with a Brother, Brother & Sons (BB&S) Force7 profile spot and a mirror system, which guided the light upwards to the ceiling above.”

Due to the customised solutions, using profile spot technology, there is no ambient light or glare in the office spaces that are situated just on the other side of the façade windows.

On entering the building, visitors are greeted with an impressive ‘artificial sun’ in the reception space. Situated on the ceiling of a large, double height lobby, the large, mirrored disk fills the vast space with a warm, natural-feeling light – in keeping with one of the original parameters of trying to integrate natural lighting alongside artificial light.

“Part of our initial workshop discussions looked at creating bright and welcoming spaces and areas,” Kjer continued. “I suggested a couple of possible solutions for the reception area, but quite quickly the client fell in love with the idea of ‘bringing the sun inside’. After the client had experienced another ‘indoor sun’ that I had made some years previously, it was decided to have the indoor sun in the welcome and reception area.”

The reception area is lit from the ‘sun’ at 500 lux, according to Danish regulations. Illuminated by a secondary reflector and sixteen narrow beam fixtures from Projekleuchten and Delux Denmark, it follows a natural circadian rhythm that Kjer feels the staff are very satisfied to work under.This circadian lighting effect continues throughout the building, with the meeting rooms and office spaces now fitted with a more natural feeling lighting system, complemented in some cases with asymmetric wallwashers that add an interesting, dynamic flair.

“[Lighting the vertical garden] started out before I came into the project,” Kjer said. “The contractor and the architects had a couple of sales reps come up with some suggestions to get the illumination for the garden to the right lux level. Their only solution was to place fixtures on the balconies of each floor.

“When I heard about that, I suggested using some more powerful LED fixtures from the film industry, and to only illuminate it from one point with a very narrow beam, just like the sun. The architect got rid of all the fixtures, and I have been his best friend ever since!”

To ensure illumination was even from top to bottom, COWI used some fresnel-type fixtures on the top to get the distance, and then very narrow beam fixtures on the remainder of the wall. Through a close collaboration with BB&S, COWI developed a lighting set-up made specifically for illuminating the plants with 1200 lux evenly from top to bottom. The setup consisted of 48 CBL Beamers, alongside four LEDheimer fixtures mounted on a customised rig. These fixtures have been configured to dynamically change colour temperature from 2700K to 6500K, thus following the natural lighting pattern throughout the day.

“I have done a couple of vertical gardens before, and I know from plant experts and experience from other projects that 1200 vertical lux is sufficient for the plants that are used in this project,” Kjer added. “However, the 1200 lux needed across twelve hours every day will only occur if there is a skylight. Without this, more artificial light is needed.”

Throughout the Blixen building, COWI has created a natural feeling, subtle lighting design, with the majority coming from hidden or integrated fixtures, whether this is through recessed spotlights, integrated handrail lighting, or fixtures that blend into the fabric of the building.

These decisions help to bring a clean, crisp feel that complements the sharp lines and minimalist aesthetic of the building’s architecture. While such minimalist design can at times feel cold and impersonal, the focus on circadian light brings an added warmth to the space, creating a pleasant, comforting working environment.