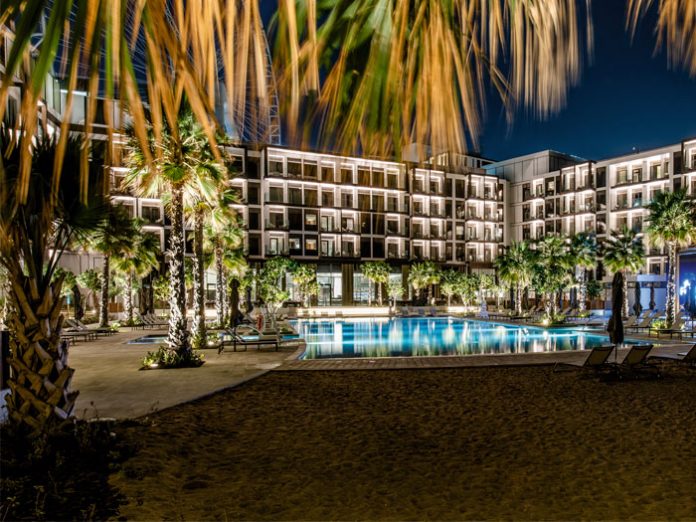 The Bluewaters Island in Dubai is a new vibrant destination that combines architectural, entertainment and theatrical lighting by neolight.

Bluewaters is an artificial island along Dubai’s elegant coastline, nestled between the two distinct palm beaches Dubai is so well known for. The iconic destination is also home to the tallest Ferris wheel in the world, the Ain Dubai, along with one of the most famous hotels, Caesars Palace and 200 exclusive shops and restaurants.

Back in 2014, neolight teamed up with Development Managers Mirage Leisure and Development, to create a lighting scheme suitable for the desired experience. Gary Thornton, Senior Project Designer at neolight, discussed the starting process of the initial designs: “The initial brief for the overall project (not necessarily the lighting), was for the destination to become a ‘world-class entertainment zone’ that encompassed a range of sectors, including two hotels, residential space, retail and entertainment, including the Ain Dubai (completed by others).”

The design approach for neolight was to establish a scheme that created a narrative between the different zones, aesthetics and feelings within the unique island setting. The lighting is used to unite connecting areas but also differentiate spaces across the island, as each zone has a considered lighting theme designed for the use of that space.

“We’ve worked on large resort-style projects before, but the sheer scale of this project was something that stands out as different for us. Additionally, the range of sectors involved (residential, hotel, retail, souk) meant that the lighting had to link and unify these spaces, whilst providing a differentiation between them all at the same time,” explained Thornton.

Dynamic and fun lighting was used for the Retail Wharf, creating a vibrant atmosphere, whereas lower level resort-like features were used for the hotel lighting. Key focal points, such as the conference centre entrance, were highlighted using direct and brighter fixtures, to give a red carpet feeling for guests upon entering.

Thornton added: “As they so often are, timescale and budgets were challenging. Four years sounds like a long time, but the sheer scale of the project meant that managing the size of the all-encompassing project was a huge challenge.

“There was even more coordination with all other consultants compared to a typical project, and a lot more site supervision and hand-holding with the contractor on site to manage the detailing and integration of light fixtures. We deployed additional staff through our Dubai office in order to manage this.”

“The mushroom-like canopies are a huge structural feature and were a huge coordinated effort between multiple consultants and suppliers to design and implement bespoke items, (including visits, tests and staff from the UK, Paris, Spain and Dubai),” explained Thornton.

“These had to be a visual feature from across the water to the Bluewaters Island and carefully managed for their size and lighting functionality,” he added.

The gobo lighting adds a theatrical element with a hint of colour that softens the hardscapes of the pedestrian avenues that link the hotels. These lighting elements also encouraged the use of pathways, giving them an interesting distinction that distracts from using cars in a normally vehicle-heavy environment.

Linea Light Group’s Alcor steplights with anti-glare effect were used for these connecting pathways, and its Admiral immersion uplights (with AquaStop anti-suction system technology for the power cables), were used to create the elegant pool lighting, adding to the overall opulence of the space.

Each of the buildings within the wharf are lit with a unique identity that combines several illumination techniques. However, overall the different lighting schemes work together collectively and coherently.

In contrast, the lower level hotel resort spaces are lit with a warmer white light that offers a welcoming respite to the more vibrant and busier retail spaces. Residential areas are softer again, creating a further distinction between uses, with soft washes to the balcony soffits on the façades.

With absolute control of the lighting elements, it was important for the team to ensure the schemes were designed with balance and are as sustainable and energy efficient as possible.

Unfortunately, due to budget constraints, the team had to cut back on dimming controls for the residential and hotel façades, which halts the ability to shift the intensities throughout the evening and nighttimes.

“Integration for the architectural lighting was an overall consideration that we strived to achieve at each stage, from the cove and slot details to light fixture containment,” explained Thornton. “There was also the need to use lighting to help to create a distinction between the different areas from residential to retail.

“Lots of decisions on how and why to illuminate aspects of the projects in the way we did were the outcome of coordination meetings, working to help other consultants understand the lit effect we were after and the concealed detail needed to achieve it, as well as conversations with the client and architects about achieving the look and feel for the overall vision of the project,” he added.

A combination of western lighting principles with Arabic culture creates a vibrant environment that is warm, welcoming, dynamic and exciting to experience.

“Our final impressions actually exceeded our initial expectations, and the client’s,” reflected Thornton.

“This was in part thanks to the evolution of the brief compared with the very first concept ideas we discussed, as it became a more entertainment-centric design, which is much more immediately appealing and exciting.

“This project was immensely enjoyable to work on, with the final results showing the rewards of hard work and one that everybody is extremely happy with, from us and the other consultants, through to the developer and client. Off the back of this project we have commenced design on another large project in Dubai, with Mirage Leisure and Development, called The Island, which features three hotels, residential apartments, a multi-purpose venue and large entertainment plaza.”