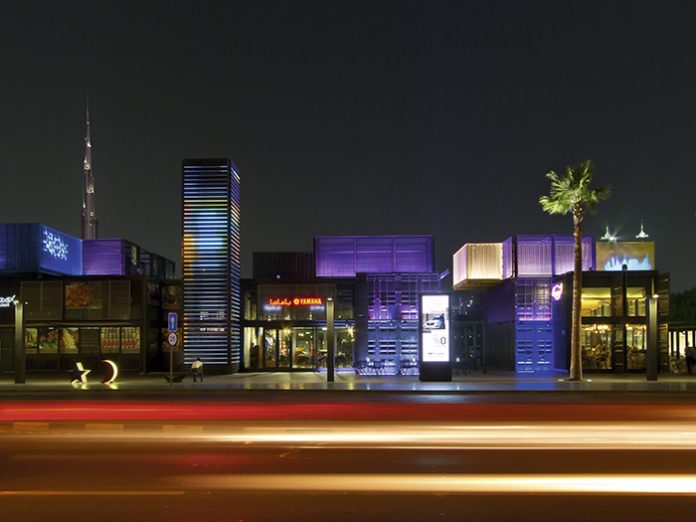 From its settled, minimalistic architecture during the day to a colourful experience at night, Box Park Dubai’s many façades form a mosaic of colour created by Delta Lighting Solutions’ ever-changing, dynamic lighting scheme.

Dubai Box Park, is a unique retail and F&B project that stretches around 1.5km along Al-Wasl road in Dubai, United Arab Emirates. The project has had the effect of encouraging local startups and revitalising the Al Wasl road area.

Designed by developer Meraas and the in house design team Studio M, the usage of modified and insulated shipping containers, which house many of the outlets, creates a unique impression and allows for smaller store foot prints.

Shipping containers were stacked together to form the stores and restaurants, and in many cases supplemented with concrete precast structures. The residential district in which the Box Park was built has been slowly transforming into a strong retail district, now becoming a Dubai landmark and attracting a younger, hipper client base.

Responsible for the development of the lighting scheme, international award-winning lighting design firm Delta Lighting Solutions, drew inspiration from the containers and the industrial feel of the architecture. As a consequence, theatrical lighting also had a strong role in design considerations whereby different layers of light provide depth to the project, just as stage lighting does.

“The Head of Architecture at Meraas, Zak Ayash, approached us for this project,’’ said Ziad Fattouh, Principal, Delta Lighting Solutions. “I have known him previously during the days when he worked at Foster and Partners – where he was a design partner. He informed me that they wanted to make the project a landmark and it had the direct attention of the top management of Meraas, so it was very critical to get the lighting right.’’

Delta was told to ensure that light levels on the walkways, roads and seating areas were at a sufficiently high level, and that the client wanted to create some excitement as well. The client was also interested in creating a strong visual landmark during the day and night.

Initially, the project consisted of primarily dark grey containers stacked on top of each other with very few of them painted in other colours. This was later changed with many of the containers painted in vibrant colours.

“Our inspiration for the façade lighting was to create a mosaic of colours often found in a container terminal,’’ explained Fattouh. “A lot of video projection and gobo projection was used to project imagery, faux graffiti and other effects that portrayed a certain character, drawing on inspiration from different city centres around the world.’’

Depending on the zone visitors are in, imagery and projection is in line with the character of that space. The combination of colour-changing lights, video and gobo projections and other lighting sources allowed Delta to create dynamic and entertaining façades that constantly change in mood.

“For the lighting of walkways and parking zones, we took inspiration from the I-beams seen in shipping yards and created a simple, family of poles, and painted these a storm grey similar to the containers. Some of the poles were used to mount Bega LED and metal halide light sources, which provided lighting for pedestrian and car park areas,’’ said Fattouh. Other poles were used to mount video projectors and gobo projectors. The poles worked with the theme of the project and looked to enhance its very industrial feel.

RGBW linear light sources are integrated seamlessly into the containers, creating a mosaic of colours during the night, as well as white light during off peak hours and single colour monochromes. The mutli-coloured scene seeks to recreate the image of the stacked containers in a shipping terminal, which are usually painted in various colours.

The unique lighting character of each zone supports way finding and also creates interest and excitement for visitors.

“In order to differentiate these zones with light alone – as the architecture remains constant – different colour palettes, along with themed gobos, projected imagery and  high-resolution projections were selected for each zone,’’ Savvidou explained.

Video content and custom gobos were developed through inspiration gathered from graffiti, media screens and advertisement panel visuals that are often found above industrial areas.

Within the ‘Harrods’ zone, holes were bored into concrete panels to house a custom LED light fitting with a glass half sphere acting as a diffuser.

The most visually stunning and main light effect comes from the light towers, which is achieved through multiple rows of RGB linear lights, creating low resolution screens in five locations along the project. The media content developed for the light towers also helps differentiate the project into zones via the content that is displayed.

Custom poles and bollards have been developed with a very industrial feel, while faux steel I-beams with glare-free light heads illuminate sidewalks and parking zones. Sidewalk lighting provides horizontal and vertical illumination of the space, thus allowing for good facial recognition, creating a feeling of safety and comfort. Custom poles were also designed to host the gobos and 3D projectors where necessary.

When considering the lighting for the pedestrian zones, glare has been minimised through careful selection of light sources and shields, reducing angles of incidence onto the pedestrians or people dining in the F&B outlets. In addition, high colour rendering was achieved by using both metal halide and high CRI white LED light sources, while colour changing RGB LED light sources are used on the façade elevations, highlighting the architecture. Lighting uniformity along walkways is achieved through careful study of light fitting selection, pole spacing and utilisation of ambient lighting coming from other sources.

To control all the varying lighting elements, including all theatrical and architectural lighting, proved to be a challenge especially as the project was spread over several city blocks. The backbone of the light controls consists of an architectural control system, which controls the majority of the architectural light sources, including: street lights, pedestrian light poles, wall washers, tree uplights, external F&B area lighting spaces and other light sources, while acting as the master control for the other DMX controls, including the gobos, video and media controls. The system allows the lighting to create multiple scenes during the night, vibrant and dynamic scenes during regular working hours and subdued white and monochrome scenes during later hours and closing time.

Box Park is an inviting, comfortable and engaging place to visit. Residents and tourists can enjoy a fun shopping and eating experience.

“We worked directly with the client and not through a lead consultant, this allowed us to communicate ideas quickly and avoid things getting lost in translation. These two things, make for a design formula that magnifies creative thought and allows for great projects,’’ added Fattouh.

The Delta team explained how the main challenge was dealing with budget limitations that required the project to be built as designed in the concept phase but with a 40% reduction on lighting cost. “We have maintained the concept ideas but eliminated the areas of its application so that no specification changes occurred but only relocations of the effects,’’ explained Savvidou. “We were still able to use LED sources with up to 80% of the products being LED, and with careful selection of the surfaces to illuminate, minimised energy consumption to an average of 2W/sqm.’’

Another challenge the team faced was the long hours of programming. The project uses multiple light and media sources that require synchronisation as well as the project being divided into multiple themed zones, providing a further layer of complexity. For that reason, the gobo, video, and media had to be selected and uploaded by area. Gobos had to be installed on each projector on site, carefully selected to fit the surfaces and the distances focused on façade surfaces.

Delta’s scheme ensures that lighting is a part of the architecture on this project. “The architectural façades are the canvas that we paint with light,’’ concluded Savidou. “Our intent was to provide visitors with an experience and a flair of an outdoor ambiance, reminding the character of industrial areas around the world, which we believe we have accomplished.’’